A while ago, I had come across the ads for Spaghetti Strap Western,, starring two lovely looking women with guns.  Now, I do have a soft spot in my heart for strong women and weaponry so I checked it out with enthusiasm, expecting a cool spin on old western-style gun-slinging.  What I got, instead, was a let down.  I wanted to like this piece, but there are too many shortcomings for me not to count this piece as part of this wiki.  However, I write this review not out of mockery or schadenfreude, but out of frustration and disappointment.  Lamentation, even.  With there being so few webcomics out there about westerns and especially strong female roles (okay, hot chicks) in westerns, why, oh, why couldn't this have been good?

If I had to sum this plot up in ten words or less, I’d say it’s “Thelma and Louise meets Firefly.  Sort of.”  The story is set in a post apocalyptic world that, in the wake of a nuclear holocaust, rebuilt itself as a lawless, old west style civilization, and I use that term loosely.  The story follows two women both named Cassandra, Cassandra Thomas and Cassandra Torrez.  Thomas mysteriously has a massive bounty on her head, and, since the two women look alike and have the same name, Torrez begins to receive visits from  troublesome bounty hunters after Thomas.  Torrez quickly finds Thomas and fights off some bounty hunters after Thomas, and both women escape town in search of answers.

Really, the premise isn't bad.  As I've said, there’s definitely influences of Firefly at work here, including even Asian elements, but instead of a spaceship with a motley crew, the cast is distilled to simply Cassandra and Cassandra.  It sounded to me like a set up for some great gunslinger girl action, but getting into it, I found out that… 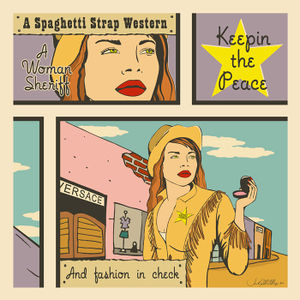 …The art is bad.  It’s not the most horrific thing I've ever seen, but it definitely gives Cheshire Crossing a run for its money in the flat, wooden everything department.  The people, the backgrounds, the action sequences, everything looks dull and wooden.

Unlike Cheshire Crossing, the women are a much closer approximation to actual human beings, but every last one of them looks dead.  Or stoned.  Or drunk.  Whatever the case, they don’t look “alive.”  Any emotional impact these characters might’ve had is killed by the constant cow-eyed look on their faces. In this page, Cassandra Thomas delivers the line "I just killed someone," with all the expression and emotional investment as someone who would say, "Damn, I forgot to pay the phone bill." The bodies are rendered a bit better, and thankfully, the women aren't portrayed as 100% cheesecake all the time.  I get the impression that Showkati really wants to show these women as beautiful and sexy and not melon-chested freaks (like some people), but his artistic abilities are limited at best.  The men are all kinds of wonky with oddly feminine figures, complete with man boobs.  There are flickers of goodness in some of the frames here and there, but the moment is lost soon after.

The color rendering is also fairly flat.  Sure, Showkati does some shading, but it’s fairly incompetently done with only one color for shading and nearly no highlighting (if he had bothered to put a shine in the eyes of these characters, they wouldn't look so dead.  FYI, Showkati…).  He sorta has a grip on atmosphere, but for the most part, the characters are rendered exactly the same in every angle of light, which is not the greatest idea when you’re trying to draw these girls at sunset.  Just sayin'.

Another big failure of the art is the backgrounds.  The backgrounds are pretty lazily done in the most basic shapes possible.  Sure, Showkati’s got a vague understanding of perspective, but for the most part, he just throws around a few lines here and there and expects it to be a background.  Well, it’s not, Showkati.  Vague lines in space and copy-cut-paste elements do not a proper background make.  If only he had taken the attention he gave to rendering these women’s bodies, to rendering backgrounds, we could see a big improvement here.

Furthermore, Showkati’s a fan of special effects tricks including Copy-Cut-Paste, solar flares, and blur effects.  These can be done well in the right hands (yes, even Copy-Cut-Paste, if used sparingly), but Showkati shows he doesn't know his way around these techniques very well.  Backgrounds are lazily repeated and re-sized for frames.  Character faces are flat out copied and used again.  Solar flares are misused, as are the blur effects.  I understand Showkati was probably tickled pink when he first opened up his box of Photoshop, and that he couldn't wait to see fiddle with all the bells and whistles, but silly special effects like this are best used at a bare minimum.  Showkati doesn't seem to get that.

Finally, the action sequences.  Oh, Lord help me me, the action sequences.  They are so very, very, bad.  There’s next to no movement rendered in any of the action scenes.  Not even when guns are fired. Gunfire is literally a white star with the word "BANG!" next to it. It’s embarrassing.  Don’t get me wrong.  I understand completely that action sequences are among the hardest things to draw as a comic artist, but Showkati had to know what he was getting into when conceiving the idea for this comic.  He had to know that in a comic about gunslingers, he would have to draw action sequences, and he’s barely capable of drawing a person standing still.

I wish Showkati had taken 1-2 years before the drawing of this comic to just work on his skill, work on capturing figures in action, work on making his inks not look like they were done with a leaky sharpie, and get comfortable with his digital tools.  Photoshop (also evidence of Illustrator or some vector program in work) is not something one can pick up overnight.  In fact, I avoid Photoshop specifically because it has such a steep learning curve.  If Showkati had dedicated time to making his art the best it could be GOOD, then there’s an excellent chance I might not even have written this article.

The writing isn't that bad.  I’m glad to say I found a lot less to hate about the writing than the art.  First, I'd like to address the obvious point of contention: the cheesecake factor. Unlike so many other creatards profiled on this wiki, Showkati doesn't turn this into a cheesecake piece, at least not all the way.  Sure, there’s fairly rampant cleavage, and there’s even a sex scene (with nudity), but I honestly I'm not sure I'd count that I’d count against Showkati.  I don’t think there’s anything wrong with rendering a sexy female character (surprise, guys, women have breasts).  I don’t even think there’s a problem rendering a sexy female character having sex.  I do have a problem when creators cross the line and turn their female characters into pure wank material, but thankfully, Showkati (arguably) never crosses that line. These women at least have some personality too. Cassandra Thomas is portrayed as a shrinking violet thrown into a battle she was never prepared for. Cassandra Torrez is shown as a fallen woman who has learned to toughen up after the world has ended and survive by any means necessary. For her character, Showkati does lean on the crutch of the “damaged woman” (or woman in refrigerator), but it’s not a step that would be unrealistic for this world.  The only complaint I have about the other characters is that they don’t really have personalities.  Or, if they do, the art is so bad I can’t tell by their facial expressions what the hell is going on in their heads.

Overall, I don’t think the writing merits a lambasting.  Have we seen the material of women gunslingers before?  Sure.  Have we seen the post apocalyptic world due to corporate conspiracy before?  Yep.  But stitching together a bunch borrowed elements doesn't necessarily make a bad story.  If nothing else, it makes Avatar.

There doesn't appear to be too much information about Ali Showkati and possible tomfoolery on the web.  He seems to be a regular Joe artist who just likes putting out comics about gun-slinging women, and if he could draw the comic worth its salt, I wouldn't fault him for that.

He also co-founded a collective called TNP Press.  Not much else is known about this guy.

I wanted to like this webcomic.  I really did, but the artwork here destroys the experience for me.  Webcomics are both art and writing, and if you fail at one, the rest of the ship goes down with it.  Fortunately, it’s a better flaw to have bad art than bad writing.  Art can improve over time, but if you’re a no talent hack or an egomaniac crybaby, no amount of beautiful gunslinger women can save you.

I say this with the greatest affection.  Ali Showkati, I want to love this webcomic, but your art is making that very difficult.   Please stop with the crappy art.  Thank you.