WARNING
This comic is not very original and has copied a lot of things. Expect reoccurring mentions of:
Invader Zim
Foamy the squirrel
VGCats
SNAFU comics
Hot Topic
We apologize if mentioning these subjects causes embarrassing memories of your younger, 'wackier' goth self to resurface. We hope you will enjoy the review regardless.

Many years ago, I stumbled upon Skull-Boy. There wasn't much on it at the time; only about twenty or so pages, and none of it very good. I rolled my eyes and let it pass by. Out of naive curiosity, I ventured back, saw that he was still updating it, and checked to see what's happened since. Five years later and he only has a little over 60 pages uploaded.

None of it very good.

It's difficult to pinpoint the actual downfall of Skull-Boy without just saying "the beginning". No, the true answer lies before even that. Perhaps it came about when William J. Gregory watched his very first Invader Zim episode. Perhaps it was when someone on a forum linked him to a VGCats comic, saying "lol check this out!!!" Perhaps it was the first time he bought a black t-shirt bearing a witty slogan like "you laugh at me because I'm different; I laugh at you because you're all the same".

Pretty big words for a comic that does nothing but rant about high school and movies.

The comic circles around a Gary Stu goth kid named Skull-Boy who is, for reasons beyond my understanding, constantly followed by girls who want his penis in their vaginas. He seems to spend most of his time violently shooting whatever bug's up his bony, poorly-drawn ass at the moment.

He also has a little brother, named Psychokid, who exists solely to be unfunny and repulsive. Also, what the hell is going on?! A little bit into the comic, they also introduce Skull-Boy's cousin, DemonChild. Such creative names by the way, all of them at least two-word nouns. Anywho, so yeah, DemonChild wants to fuck Skull-Boy, and when Skull-Boy's sister LivingDeadGirl (love the names) comes to mock her brother for being repeatedly sexually assaulted by his cousin... um... Tom Green appears... I guess. When Satan gets ashamed of his son's faggotry on Earth, he sends in... a winged goth girl named... Demgel-Erin. As in... demon angel I guess. Anyway, he sends her up to keep Skull-Boy from falling in love with DemonChild. Wait, why does Satan have such a problem with his son being gay? Is he worried that Christians might think less of him?

And then... this happens. Immediately after that bizarre sequence is... a... review of Ultra Violet, I guess. Then the artist shows off his shrink fetish followed by... what is this? Then D.Erin gets brought back to proper size and Skull-Boy falls in love with her because they both wear the same sweater. Then he tells us everyone's a sell out except him.

That's about as close to a story line that I can get out of this mess.

The early art in Skull-Boy is unashamedly blatant in its copying taking inspiration from comics like VGCats and Snafu; comics that were popular in the early millennium for using gross-out and violence jokes that appealed to the sort of people who wore Invader Zim t-shirts and quoted Foamy the squirrel in public.

Oh wait, did I mention Foamy the squirrel? 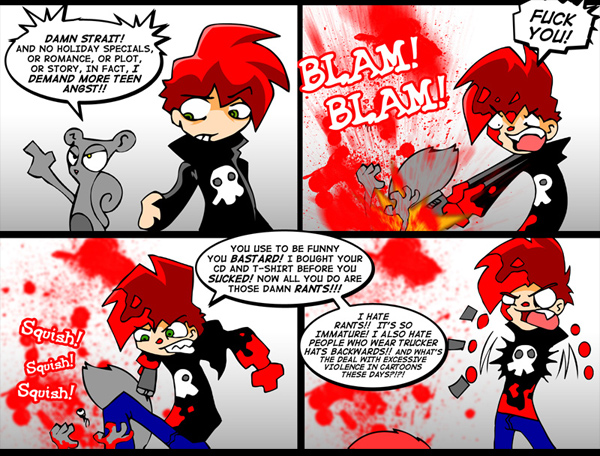 It's difficult to find things to say about this art style since there is literally nothing unique or interesting about it. It's a mish-mash of already horrible styles from other mediocre artists just thrown together over Photoshop-effect backgrounds. A little later on, the characters become a bit taller and more anime-inspired, but Gregory never dares stray from his roots and thus, despite smaller changes, Skull-Boy remains doomed to forever look like a VGCats guest-comic. 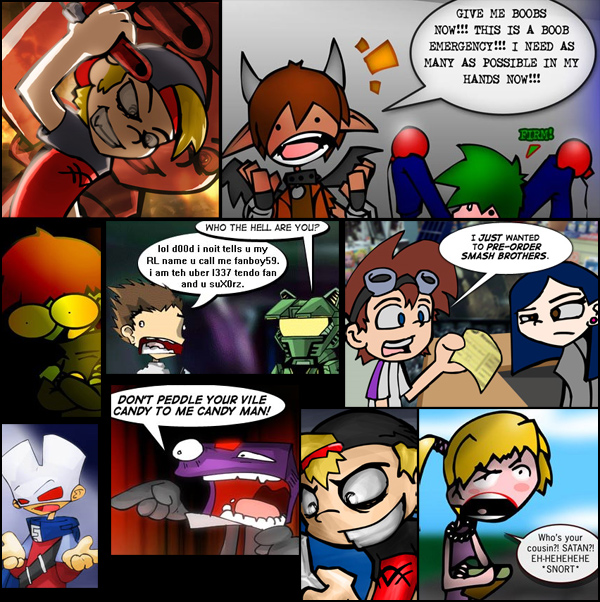 Can you guess which shit comic each panel is from? Play along at home! 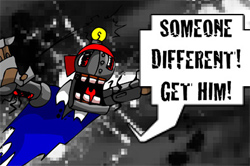 People hate on goths because they are brave enough to be different. A Hot Topic shirt told me so.

His writing is usually either whining about high school, or... hmm... oh look, he's fighting a bunch of high school students, and they're robots. SUBTLETY!

Comics not revealing his traumatized experiences in high school are usually incredibly unoriginal jokes that he stole from better shows. This comic's been ongoing for so long, but so very little has actually happened, because this guy keeps trying to make so many other comics and spin-offs at the same time, as well as remaking older pages. He also seemed to restart the comic out of nowhere, where Skull-Boy's sister now refers to him only as brother, and talks in what I believe William Gregory THINKS people spoke like in the Victorian era, but everyone talks stilted and awkwardly, in a way that no one in real life speaks or acts.

He doesn't have any real form of biography on his page, but William J. Gregory apparently went to art school. By the looks of it, the only thing that did to the comics was make him color them in even more obnoxiously bright colors. Skull-Boy isn't the only comic he's made that suffers schedule slips, spin-offs, and remakes. He is in a constant state of rewriting, deleting, starting, and branching off of other comics. Which has caused all of the comics he's been working on for years to be going absolutely nowhere in plot. Skull-Boy happens to be the one that's advanced beyond the introduction pages.

And I am pretty sure he's got some sort of pent up lust because he also won't stop drawing Skull-Boy and DemonChild naked or gaying it up a notch.

If he ever wants to improve his comic, he needs to take a few lessons in writing, stop using his comics to spread his opinions, make his OWN jokes, as in jokes that aren't just violence, blood, or gayness.

But most of all, he needs to stop working on a million projects at once, sit down, and focus on one single thing at the moment, and make a steady, linear story.