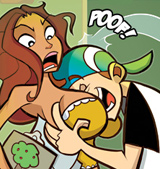 Regardless of whom they are attached to, breasts are the property of any man that feels like groping them. Fact.

Somehow, a frat boy developed intelligence slightly lower than a monkey and a bit higher than a protoplasm and began using it to draw a webcomic. The subject matter is just as you would expect it to be: Gross, misogynistic to the point that it would make Maddox vomit, offensive to human intelligence, and perverted as all hell. The frat boy hired a young artist named Trip to help him draw his abomination of Man. The young artist apparently had never seen any webcomic except Penny Arcade, and as such everything he has drawn imitates Penny Arcade in every way. Oh yeah, and he's never seen a naked woman. You can imagine how this went down.

"Brew" is as disgusting as it is possible for a person to be. It isn't even that he's a misogynist, it's that he doesn't really get why his misogyny makes women want to murder him in his sleep and why it makes men view him a threat to real men everywhere.

"Trip" is another story. Rarely speaking out and by all appearances younger and more inexperienced than Brew, you just kind of feel sorry that Brew dragged him into this horrific debacle. I personally hope that Trip can recover, although I feel like he might have to go gay to find a girlfriend, considering that he's already alienated perhaps half of all women who will ever see his art on SM. At least if he's honest with them about it. My advice: Take the cock. I'm sure it can't be all bad, dude. As Brew might say, hey, it's probably like taking a big crap. 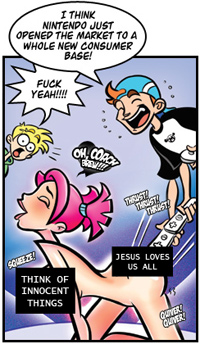 If you're disappointed that we censored this, it's time Grandpa took you out behind the barn and had you shot.

Poor Trip can draw everything but women very well, which is depressing considering that Brew is forcing his storyline into lesbian intercourse and naked Orc feminists every other strip. The strip's art is pretty much Penny Arcade with sex references instead of video game references. In case you've never seen either, that means blocky detailing, a hard push towards stylishness over realism, and more copy-pasting than, say, Lackadaisy Cats but less than the likes of Ctrl+Alt+Del.

Writing kills Shredded Moose. It utterly fails at being entertaining in any way and succeeds primarily at making the reader feel like a chauvinistic douchebag just for having opened the comic on his or her browser. The fact of the matter is that having a comic wherein the PS3, portrayed as a girl, is violently slaughtered by Mario for no apparent reason is not funny. Brew, the reason it's gross isn't Trip; he's drawing the scene just as he should. It's you. This arbitrary violence bullshit is not funny, it's disgusting.

For some reason, Brew decided that having a feminist hippie go after his Mary-Sue would make for good comicry. Apparently, when people accuse you of being a chauvinist you simply attach yourself to a feminist and it balances out. Except that it doesn't. It's weird to see the same exact feminist who once railed against you now having sex with you. Incidentally, I don't understand why your character had the need to wash off after making love to Monique, the purple-clad redhead; she's easily the most attractive woman in your entire comic. At least she isn't cartoonishly proportioned and looks vaguely normal.

In the end, Brew, after reading through your comic and looking at your various attitudes towards women, I get the feeling that you are a closeted, overcompensating homosexual. You have an obsession with forcing Trip to draw naked women that is almost unhealthy, if such a thing is possible. Look, all I'm saying is that I've never seen a man that was so sexually insecure that he felt a need to constantly show how much he thought that naked women were attractive.

And then there's how you made that sand bear, ostensibly to attract the ladies. I think you like the bear, and you want to snuggle with it like the girly man you really are inside, and you're just making excuses. It's OK, Brew. Homosexuality is OK. The Bad Webcomics Wiki is totally OK with that. We don't expect you to make yourself something you're not. We just expect you to stop objectifying women like an idiot. OK? Please? For the love of God.

Other Strips in the SM Archive 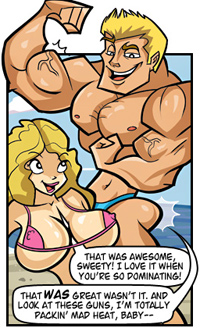 These people are not mutants, they are in fact attractive. (Also, notice how one of the word bubbles' tails is underneath the "woman's" breasts and looks like it's getting... oh Lord I can't finish that sentence, but seriously, WTF?!)

Brew cross-dressing, supposedly so he can get at some sweet, sweet naked ladyparts. Again, I say otherwise.

Seriously Brew, you don't need to demonstrate that you're straight... except you're clearly not. How do you like my take on your sexuality anyway? Does it make you nervous? That's the kind of thing people think about you when you force shit like this. It shouldn't make you nervous. Normal people aren't this sexually insecure, dumbass. Quit forcing the issue already.

Brew just loves to force Trip to draw lesbians, even if Trip has the porn-artist skills of a baked potato.