Last summer I was stuck at my computer for extended, boring periods of time, and I ran across a banner ad with a cute little raptor-thingie with wings. I started reading the webcomic and liked it a lot at first, but something bugged me. As time went on, it bugged me more and more until I hated this thing and its creator with a firey passion, once I figured out what was pissing me off so bad. See below for details. 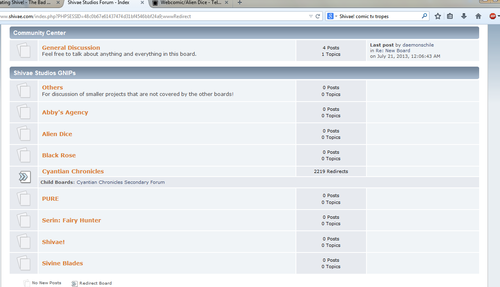 Tiffany has more comics on her site than posts on her forum about those comics.

Shivae! is comprised of three different story arcs following different characters in the same world. I read one in its entirety (Vas), one partially (Cler), and by the time the third one (Caiden and Koel) popped up I'd given up on the entire enterprise, so I'd say the author's downfall came when she couldn't rein in her focus on a single storyline for long enough to FINISH THE DAMN PLOT. Anyone who gets wrapped up in one of these storylines is destined for massive disappointment when they exhaust the archives, because the author has no fewer than TEN different comics that she updates on the rotating "schedule," bouncing from story to story as her short attention span dictates. This means first of all that it takes months upon months upon YEARS for ANYTHING to happen in any of these stories, and the author shows no signs of wrapping any of them up anytime soon (or ever). The downfall for any individual strip comes when the reader realizes that they just don't care enough to hang around for two years waiting for the next page of the damn thing.

Most of Tiff's ten (I still can't get over this! TEN! COUNT THEM!) comics take place on a fantasy world of her invention called Cyantia. Cyantia is your basic unspoiled-wilderness fantasy world, populated by unicorns, talking dinosaurs, and flying furry raptor-thingies called Shivae. There are also bipedal anthro characters called Newcomers, who are the only civilized culture, and the three stories in Shivae! follow members of that particular species as they do immensely boring but EPIC and TRAGIC things while the Newcomers destroy their beautiful, unspoiled wilderness home in the name of progress and civilization. 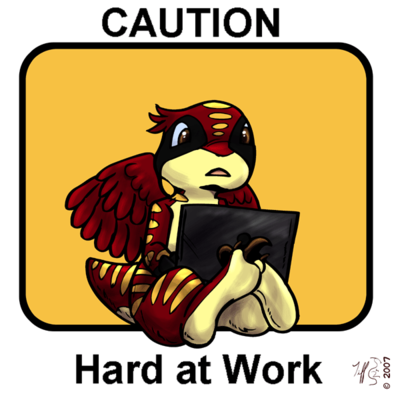 Presumably not on the comic.

Oddguy here. I had to finish this review because it was left undone by the original author and I didn't want to see it go to waste. I can't really say much about the art having only skimmed through it so that I could write this section but I can't say there are anatomy problems, although that is because all the characters are strange bird/lizard-like creatures of Tiffany's own creation so I don't know what they are supposed to look like. Reading this review so I could complete it I noticed that it mentioned this comic had anthro characters and wanted to look them up in the "Characters" page, but as this review also mentioned, the site is fucked and there was nothing there. Still, if you can judge by the people characters in Tiff's other comics, all man-like characters in this comic are probably shit. You see, while she has been able to teach herself how to draw various dinosaurs, all human and humanoid characters drawn by Tiffany are fucking atrocious. They are all some lazy mix of anime, beginner level cartoons and gradient effects that this time not only fail to hide the artist's liability to draw them, but actually makes them look worse. 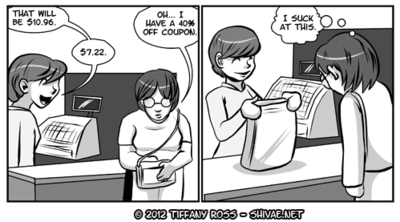 Furthermore, the setting is bland and uninspired and, although the art has gotten somewhat better, it has done so mostly by way of adding layer upon layer of Photoshop tricks to cover up flaws. In the end, all problems aside, the art looks okay in the later comics so I give it a pass.

I'm splitting this into two categories:

World:
One of the most important aspects of a fantasy series is the universe you build to set it in. It has to be consistent, interesting, realistic enough so the audience will buy it (or just damn cool enough that they won't care how unrealistic it is), and have its own rules, etc. The world of Cyanthia is just another carbon-copy generic-fantasy setting with that same Medieval-England forests and ravines and rolling fields that are just sort of there as a backdrop for everything else and that you've seen a million times already. Tiffany seriously underestimated the importance of setting to a fantasy story and sort of plopped some green trees in the background without putting any effort into it. I have more to say about this but without the archives I can't really flesh it out.

Characters:
Okay, this right here is the huge beef I have with this damn comic. Tiff took a pretty interesting premise - write a story form the point of view of a non-human predator animal - and completely cocked it up. Stories written from an animal POV can be really cool - see Jack London or EE Knight for well-executed examples. Tiff even ups the ante by making the main characters predators. Now listen carefully here Tiff because this is important. Predators make interesting protagonists because they introduce - you listening? Because I know this is going to be a novel concept for you - CONFLICT AND AMBIGUITY! The audience is supposed to root for the main character, yet the main character regularly kills and consumes other living things, in a universe where animals are intelligent and can talk! It's like a non-sparkly vampire novel! Yet Tiff, unwilling to allow even the SLIGHTEST glimmer of ambivalence or malice into her Gary-Stu protagonists, immediately hamstrings this idea in the first few pages by showing that shivaes only eat the losers of the genetic lottery, namely less-intelligent creatures who aren't self-aware and can't talk. So then it's OKAY to eat them, geddit? Getting past the bizarre implications of this weirdo value judgment (is this equivalent to like, murdering someone with Down's syndrome and that being okay?), this is just totally side-stepping potential for interesting characterization. Tiff is actually GOING OUT OF HER WAY to make her characters more boring. What the hell.

Continuing the watering-down and frankly, Disneyfication of her main characters, Tiff builds the supporting cast entirely out of Good Guys and Bad Guys. Every character in this thing is literally either a selfless, environment-loving hippie or a child-murdering polygamist serial rapist. This means that the main characters in both Vas's and Cler's storylines are sickeningly goody-two-shoes little wusses who stand around and whinge and cry about just how gosh-darn MEAN everyone who opposes them is. This is what did this comic in for me: I realized at some point that I didn't give a shit what happened to these preachy little cretins, and secretly hoped to see them all die in a fire. But then I'm a terrible person.

This black-and-white issue leads into my main problem with this comic: not only did Tiff hamstring herself on the predator thing, but her weak writing means that every nuance she could have gotten out of the animal-protagonist thing is completely eradicated. In short, and this is another important point that half the webcomic artists on here need to listen to, so I'm gonna write it big: THERE IS NO POINT IN HAVING YOUR CHARACTERS BE ANIMALS IF THEY'RE JUST GOING TO ACT LIKE PEOPLE. Not even interesting people, but boring, after-school-special, let's-all-be-friends-and-hold-hands people.

Oh, man. I don't even want to get into this. I read the backlogs of all the newsposts on Tiff's website and people, this is some epic e/n bawwwwing and whining. She actually reveals way more stuff about herself than I'm comfortable reproducing here. The only really relevant thing I found was her age. From reading these comics, I assumed that Tiff couldn't possibly be out of her early twenties or late teens. The perceptions of the world, her characters, particularly the coming-of-age, parents-just-don't-UNDERSTAND themes to some of them, were just so immature that they screamed "high school" to me. Turns out Tiff is not only a legit grown-up, she has a kid (WHO I WILL NOT WRITE ABOUT HERE BECAUSE I KNOW WAY MORE ABOUT THIS KID THAN I AM COMFORTABLE WITH AUUUUGH). But seriously, from what I've read? Tiff? You need to fucking GROW UP. I'm going to get into the whole "I wrote this because I was mad at my parents" bullshit once the site is working again but for real? Yes, I don't know her in real life but you know what? I'm going to judge her anyway. I'm going to judge how her worldview seems to scream fifteen-year-old. I'm going to judge that she supports herself and her kid solely on the proceeds from this webpage, and then judge her even more for being completely unable to format, upkeep, or update said webpage. And then when I'm done with that I will judge her for being so immaturely attached to her characters that she couldn't just write a short story one-shot, with a beginning, middle, and end, but had to get into one of those terrible "let's just see where this goes" open-ended "plots" that just means the artist is way too attached to their characters to ever let them go or stop writing about them. And then, because I am a terrible person, I will ignore my own failings and judge her for her ability to never say "no" to one of her own horrible plot ideas, to never edit anything, to just keep starting new storylines when she can't even begin to update or keep up with the ten she has. And then I will go lie down for awhile because I'm not Yahtzee Croshaw and I really ought to pace myself with the judginess before I blow some kind of gasket.

This review was unfinished and I had to write up an art section and a conclusion. During my brief excavation into the "Shivae!" website I've come to realize I agree with everything the original reviewer said. Tiffany Ross is one person doing the combined work of ten people. Ten very incompetent people. Traversing her site I found that the number of comics she has had increased to eleven, but I quick look at TV Tropes found that the actual number is closer to 20. Some of these have been officially abandoned, others have not updates in years or have been rebooted, at least one has been replaced by a per-existing comic in a separate URL but with the banner unchanged and two more can now only be purchased. Not that it's possible to know any of that from looking at the site, which is broken as fuck an impossible to navigate. What you can get find out by looking at the site is that the author bio does not do this person justice. I'll respect the original author's wishes by not writing anything about Tiffany herself (at least until I write my own review about one of her 50 awful comics) but I will say this: Don't tell Tiff to improve her comic, because she won't. What she will do is lash out at you for asking.

In conclusion, thankfully for Tiffany Ross, writing 20 comics at the same time doesn't leave her with any spare time to re-evaluate her life.