Hoo boy... where to start? Okay... once upon a time, there were people and animal-people. And yes, animal-people is what the artist calls it. She has made no attempt to come up with a fancy name, and in fact calling something a furry/scaly/animorph, or even HYBRID may just make this world TOO COMPLEX FOR THE HUMAN MIND TO UNDERSTAND.

So animal-people are (surprise surprise) a combination of people and animals, with animal characteristics and the ability to transform into their animal. ORIGINAL! Apparently normal humans do not know animal-people exist despite the fact that they walk around with their animal characteristics exposed, are about half the population, and purposelessly transform into their animal for human enjoyment. No, I wish I was making this up. Here's an image from the comic as proof. 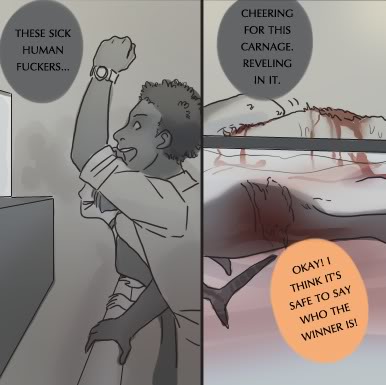 Oh, but the humans must certainly be cheering at the invisible wizard who caused him to transform, and just as a treat the wizard made more than half of the entire population with animal characteristics, which walk among them in daily life. What a clever wizard!

Who apparently had a mean mom, which explains why he's so maliciously, unfeeling, abusive rebellious lawl.

His bio is a bit more in depth, but nausea-inducing and highly cringe-worthy. I warn you. Once you get below this will not only be ripe with abuse/rape triggers, but filled to the brim with an utter lack of how basic societal conventions/psychology works.

So he drops out of school, gets in a fight with his rapist father, and gets thrown out on the street. The fight with his father will be the last time ever he stands up to one of his abusers, don't worry folks! So on the street he gets picked up by a mob boss and put to work as a male prostitute by age 16. That's where our story starts!

I would probably say, the last panel of the first comic where the artist fails to color IN THE LINES!

So far the story goes:

And that's where we leave off, ladies and germs.

Lots! Despite what I said the style is not far removed from the typical copy-pasta animu. The consistency is terrible, very few backgrounds if any, and it is PAINFULLY OBVIOUS she puts no real effort into any of the art in the comics. Her color is sporadic, usually reserved for blush and erections. In the first few pages of the comic she arbitrarily colors or doesn't color the clothing the characters are wearing. The anatomy isn't so hot either. She seems oblivious that men DO in fact have hips, her torsos lengthen and shrink constantly. Her expressions are sometimes tolerable and other times laughable.

Here's a collection of my favorite awful panels for your pleasure: !WARNING THERE IS A PENIS BELOW! 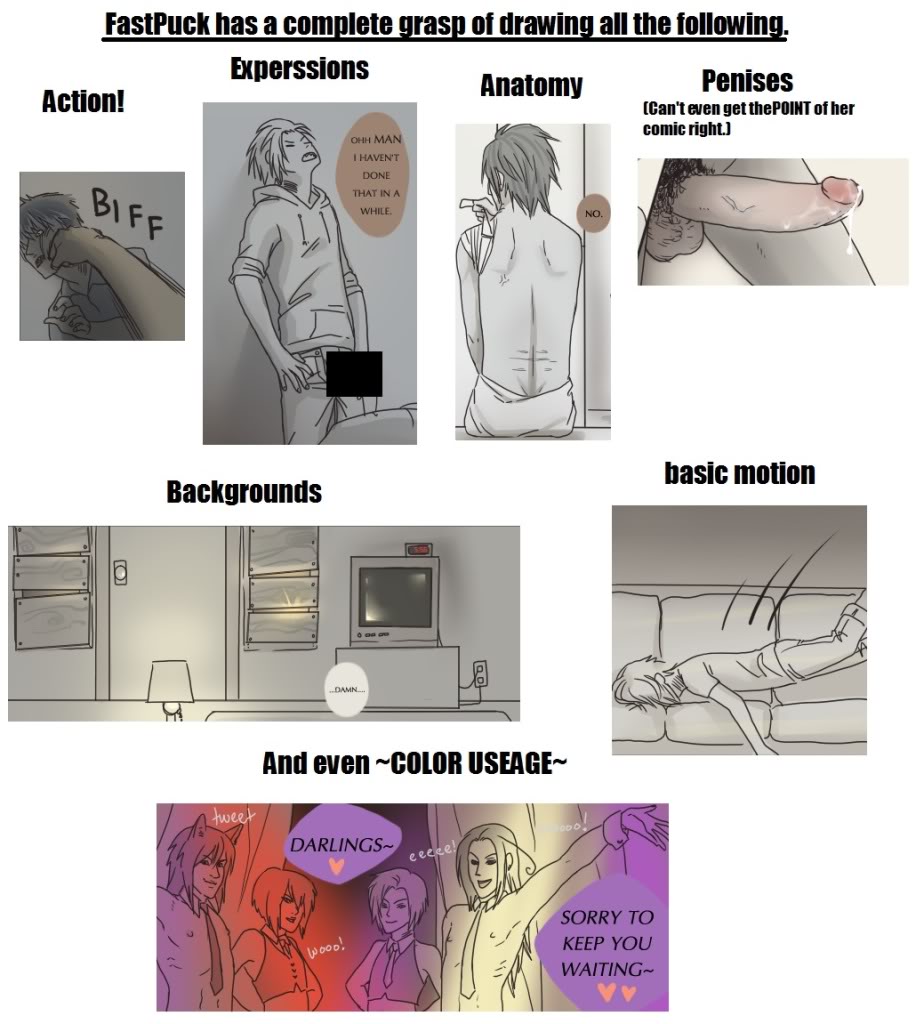 Remember the part where she said humans don't know animal-people exist, despite them not attempting to hide at all and being more than half the regular population? Also that part where you had no grasp at all how child abuse affects a human being or the societal conventions around it? Putting THAT aside the dialog's brain-splittingly terrible. An actual line of dialog was “Soooo they're both whores. Lol.”

The story is cliché, the old "He rapes me, so he must love me" tripe. Prostitutes, animal-people, underground fighting, and mobs aren't overdone either.

Oh, your run-of-the-mill hyper yaoi fan. She spends her free time having lady-boners over gay shark butt-pounding, and babbling incoherently in some wretched dialog based off a series of 4chan memes. She claims she doesn't find rape sexy, yet her track records seem to say no but mean yes. Concrete proof? How about: on page 3 of Shark Teeth, she states this.

Hey, are you not hating the author enough? Here's a direct quote about her character Pepper. Yes, the one I just told you was raped and beaten since he could sit up. “Yes, I know that Pepper is a stupid slut. Hell, he knows it. And Ken. He knows it too. Really well. Lololol “ Stereotypical evil villains in black armor with purple capes who eat kittens with their toast, could learn a lesson in being an irredeemable monster from this cunt!

Copy-cat clones of her who talk in ROFLCOPTER and beg her to have Pepper raped more. Apparently when she started the revision of the comic it already had 800 fans, and currently has 3879 just on SmackJeeves. If that doesn't make you cynical have some screen caps of comments from her fans.

KEN ONLY WAS TRYING TO GET HIS ROCKS OFF AND FEED HIS FRAGILE EGO BY INFLICTING DEEP PSYCHOLOGICAL TRAUMA ON A DEFENSELESS HUMAN BEING! THAT'S NOT RAPE, THAT'S BEING NICE!

I'm all raged out folks. I can't believe the horribleness of this comic has not been brought to light before, and I am proud to show it, and the author for what they really are.

UPDATE: In an interesting turn of events the author actually got better. Like way better. At least in his new comic, Dragon Husbands, which is still boys-love, but 137 pages in as of now and no rape (well, there is a sort of kidnapping through pre-arranged contract, but that's the plot right now) . I don't know if she changed his views, but it's a good start. It's an arranged marriage (yes, with the two being male, don't know why), one being a nobody and the other a dragon, set in a futuristic setting. The dragon guy could literally cast a spell to make the other love him, but he doesn't (yet anyway), because he wants his partner to love him for who he is. The art, manga style, is decent if not good, as is the writing. So, congrats to Sarah and may she keep out of yaoi rape territory!

SECOND UPDATE: Smackjeeves has been shut down, and this webcomic has been wiped along with it.

-Her new comic, which is pretty okay, all things considered.