All right, I admit it. I couldn't stand to read through this webcomic. This is the first time I've ever done a review for the BWW where I literally could not goad myself into reading the full extent of a webcomic. Let me remind you, I've reviewed Jack, Megatokyo, Shredded Moose, TwoKinds, and King Nightmare Travesty of the Internet Ctrl+Alt+Del. I've seen the worst there is. I've even got a few hundred pages into Boston and Shaun before closing my browser. Yet somehow I could not drag myself through Sarah Zero.

I'm not sure why. Maybe it's because the story isn't there. Maybe it's because it looks like a bunch of latter-day cell phone advertisements strung together with no coherency of story or any uniquely interesting hook that might catch one's eye. But I think the biggest reason I couldn't get through this webcomic is the same reason the Something Awful forums ripped creator "'Ace' Plughead" a new one: Namely, this is one of the most pretentious webcomics on the whole Internet. That in itself makes it a truly grueling experience to actually read.

Pretentiousness. That would be on the first page, where Plughead starts his webcomic with the statement "I'm Gonna Rock Your World". Note to others: Don't start like this. Your readers will decide whether you rock their world. In fact, any of the so-called "cliches" he lists in his little tirade on "cliched Internet comic themes" could work, if the writer and artist didn't suck.

Plughead is an obnoxious asshole who took time out of his busy day to go on to the Something Awful Forum's "Webcomics Megathread" looking for advice. He made a jackass out of himself by using phrases such as "awesome.con" and substituting "gently caress" for "fuck" to attempt to win points from the SA forums. Eventually, he was banned for being an obnoxious nuisance.

He continues to be an obnoxious nuisance through his webcomic Sarah Zero. As just one example, he actually made the SA ban a subject for his webcomic here, and he makes other shit detailing tirades that are absolutely retarded and make no sense. I know nothing else about Ace "awesome.con" Plughead, and don't want to know anything more about this man.

There's one thing Sarah Zero's art has going for it, and that's style. It looks like a sleek, sophisticated cell phone ad, like an ad you'd find in a glamour magazine or something. Something a hotshot young Madison Avenue artist would make. 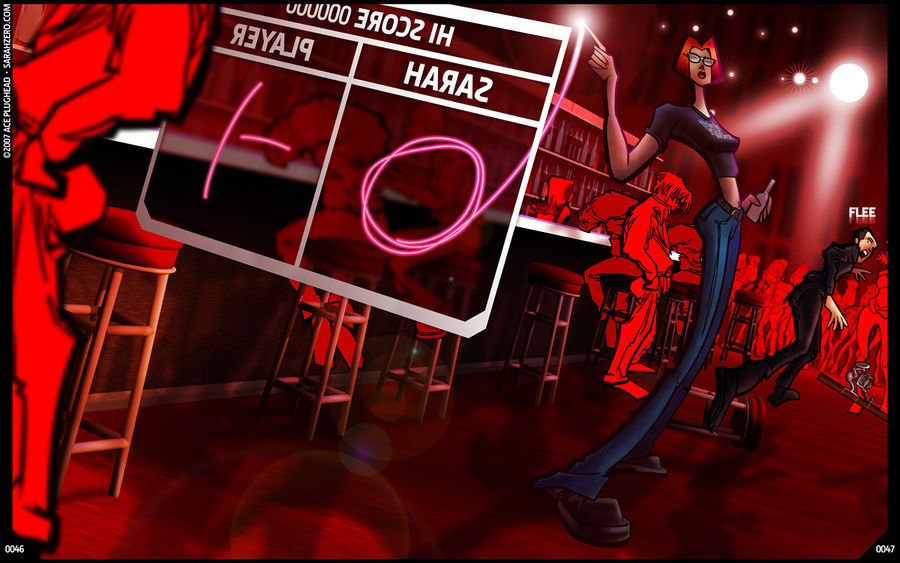 You don't tug on Superman's cape, you don't spit into the wind, you don't pull the mask on the old Lone Ranger, and you don't mess around with Sarah.

The reason I use all them pretty words to say Sarah Zero's art is "sleek" and "sophisticated" and all that other garbage is because this is pretty much my only positive thing to say in this entire review, and I want to dwell on the good times for a moment before I must bring myself back into the real world and sadly realize that the art is bland. I'm not saying it's not well-done, I'm saying it alternates between bland and terrifying. In the bland webcomic, we have a very stylish sort of look that wouldn't feel out of place as a centerfold magazine ad. That's the webcomic's biggest problem; it fits in with 2008-era Americana almost too well, and therefore has nothing of interest to add to all the other rabble images we're constantly bombarded with. The other webcomic is terrifying in the lack of detail. If this guy were a Transformer, it would be badass; as is, the dark eye sockets with big happy smile remind me more of the Wyoming Incident videos than a cool looking guy. Is he supposed to look like a creepy rapist Plughead? 'Cause that's what I'm getting from that facial expression.

I recall at least one moment where the art got even creepier, though. Once Plughead made a fanservice ad for his site, featuring a naked Sarah Zero, in that style. It was linked here. This was the censored version. If you gave the guy money or voted for him (one or the other, I can't remember which) he'd give you the full nudie version. I can think of no better reason not to give money to this man.

Pretty much nonexistent in Sarah Zero is the writing. Oh sure, there's one of those silly "oh look at me, I'm a tough modern chick!" storylines wherein the rebellious lead character tries to find some sexy lovely manmeat. But that's it. There's nothing of interest to be derived from the writing here.

Also: Notice how all her clothes are ripped off in the ocean. As if the art isn't already hard enough to look at.

Other than that, it's a series of "witty" faux female-empowerment shit, or something to that extent. I really don't know what to make of the whole of it. You've got shit like this, for example, and then you've got obnoxious shit like this that looks stylish but is absolutely vapid in what it's saying. None of the characters seem to have anything remotely approaching a personality, much like most of the other webcomics listed here. Whatever personality to the characters, much like the personality of the webcomic itself, it vapid, corporate, and exceedingly boring. What good art is here, other than Zero's blocky breasts and other ridiculously over-the-top concessions to "style", is washed away by a complete lack of good writing of any kind.

In the links below, I've included a review by John Solomon, which notes a storyline involving a rock band and Zero's being a "genius entrepreneur" and a "miracle substance". I'm sorry, but I couldn't read that far. For more information on comic writing, you'd probably be better off reading Solomon (nee Fuego)'s commentary anyway. So here's the full Fuego bit, included in case the current page is dropped from the SA forums.

Since there's a whole lot of people in this thread with the artistic experience to critique the visual side of things, I'll stick with my talents and look at the writing.

The thing reads like a trudging attempt at emulating Warren Ellis at his most "the future is now", except at the speed of a glacier. That's a big mistake, not even Warren Ellis can be Warren Ellis perfectly all the time, and you're not a good substitute. Especially since he works in messages, overtly or subtly, and your webcomic looks like style without substance. The decompression, updating "1.28 times a week" with maybe two panels, means that a lot of the enjoyment a reader could get is offset by the tedium of repeatedly clicking the next button. This one took longer to get to than it did for me to read, and though I'm a fast reader I also have a fast connection. And, of course, there are the textless panels which would do great for setting the mood if the constant clicking didn't tick you off.

The problems with pacing can easily be dealt with by studying comic books - or "sequential art" if you want to be pretentious - and figuring out what works and what doesn't. You are not writing a story, but nor are you making a movie. Balance out a happy medium and ensure that whatever message you're trying to impart doesn't mess with the entertainment value. Actually having a message to impart would be good. I don't feel like Sarah Zero is trying to teach me anything, except maybe that if I was a rich superstar with a dead sister I could make a set of wings out of green playing cards and then crowd surf?

Moving on, your main character does absolutely nothing for me whatsoever. I'm reading through this thing, and what do I see? Some lanky bigfoot girl in a Hot Topic t-shirt being a condescending poo poo to strangers and, bizarrely, having an effect as if what she said was in any way revelatory, insightful or anything but a meaningless dime store platitude found in some self-help e-mail forward from your grandmother.

From what I can gather from this disjointed narrative, the protagonist Sarah Zero is a Mary Sue in her own rock and roll band who is also a super-intelligent genius entrepreneur who invented some miracle device - yet she is vulnerable for some reason that I couldn't care about. To be quite honest, Sarah Zero reads like a poor man's Dresden Codak: slow to update, self-centered and unlikable protagonist, trying to be Warren Ellis, atrocious storyline... but without the naked nerd tits to draw in the crowds.

In addition, nobody has their own voice in your webcomic. They all speak in the same manner, which I assume is yours. That's a supremely amateurish mistake to make, and possibly the very first thing you learn when you put effort into writing seriously, which is why I think that whatever artistic talents you may or may not have, you're severely lacking when it comes to writing. You've got no grip, no hooks, no emotional investment and no separate voices. Invest some time in getting better or find yourself a partner to write for you. There's possibly someone out there who wouldn't mind rewriting your scripts for you, if you still want to keep with the same message.

Here's some hints to get you on your way to becoming a proper writer: first off, inventing slang is one of the most difficult linguistic things you can do, so don't do it unless you're either very skilled or very knowledgeable. Second, if you can't give every character, including bit-parts, their own voice for dialogue - you're not trying hard enough. Thirdly, no writer was ever not a reader, so read a lot and don't be afraid to let it influence your work as you're starting out. You'll find your own particular style eventually, don't rush it and let it progress naturally, and while you shouldn't worry about imitating people, don't consciously steal. Last of all, analyse your favorite protagonists and figure out why they're sympathetic rather than just pathetic. Try for depth and personality, rather than the shiny veneer of cool you've done with Sarah Zero.

Sarah Zero is proof that style does not equal substance. In fact, it's the opposite. Here we have a webcomic with heavy-handed messages, overdone styling, vapid story, vapid characters, and unreadable plot. There is nothing worth reading in Sarah Zero. If that isn't the mark of a bad webcomic, I don't know what is.

The following are all of the posts made by Ace Plughead to the Something Awful Forums, with choice commentary from other posters on the comic: