I was poking around a few Webcomic toplist sites when this webcomic came up a few times. After reading the entire webcomic to the current page, I felt that this review needed to be made.

Its inability to choose what it wants to be, a parody or an actual superheroine story or a protest against female depictions in webcomics. The comic could be pretty great, if they could stick with one theme and go with it, until another theme is needed. But no, they are all over the place with the story like a room full of sugared up kindergartners.

This story does contain a lot of "Plot." Copious amounts of plot. But as for an actual story, well that's where this webcomic falls flat. The premise is that a Latina college student who is bored with her life, somehow stumbles upon a quite freshly fallen UFO thing, and by jacking a suit that was inside the craft, she becomes a superhero. The main running gag is *gasp* the heroine is roomies with the schools reporter/journalist, who has made it her life's goal to unmask "Salvadora." Despite the panty-thin plot, toss in some unexplained random encounters, a villain that has no real reason to be a villain, and the tiny fact that apparently only women in this world can be heroes, well you either get a sexy lesbo superheroine romp, or a thinly veiled feminist propaganda webcomic. Bleh.

Carmen Camacho/Salvadora: Protagonist, Super Thicc latina super heroine, bored college hippie. How many more stereotypes can we shove into one character, to top it off with her becoming a sexy pinup superheroine. She tries to Clark Kent, but its obvious who she is even if the story did not tell you. One of the most over sexualized characters in the comic. Her story is as about as shallow as a piece of paper. They could have drawn her nude and she would be less sexualized as she is now.

Jean O'Keefe: Salvadora's foil in reporter form. Goes from scoop to creep in fewer panels than it did to show Slavadora's boring day. Not thicc, and a carbon copy cookie cutter character that has been overdone.

Pulchritudinous: First named villain, turns out to be a clumsy anti-thicc villain. Gets beaten when she is shown that the internet was talking about her. So you are automatically a villain for actually not liking thicc things? What's next, you are a nazi for not liking tasty cake and cheese pizza? An obvious jab at the fans or people who told the staff that the thiccness isnt good.

Admiral Awesome: Female leader of the all female lesbian super heroine group T.H.I.C.C. (I shit you not.) They really dont flesh her out except as a vehicle to move Salvadora into their ranks. Also token black heroine with sassy attitude.

Gamma Cutie: Totally not a She-Hulk rip off. nu-uh no way. Except She-Hulk was a well written and fleshed out character, and this green skinned anime reject is just a ditz. Another vehicle to try and tow this stories pieces along.

Xatra: Villain, Rival, Thicc cheesecake antagonist. Apparently has the exact same powers as Salvadora, but her suit is different. Comic relief for when the story stalls (alot.)

Finch: The only non thicc super heroine that is filling the supposedly needed loli/flatchested/small girl niche. Also another carbon copy, cookie cutter emo anti hero. Pass. Also a gender swapped Robin, the Dick Greyson era. Since thats obvious, since they made it her last name.

I really wanted this comic to be good, as it has some charming points, but the art style is anime in reverse, over exaggerations of the bust and hips and asses of its female (all characters) and then none at all for the other women in the world to promote a false sense of "diversity". 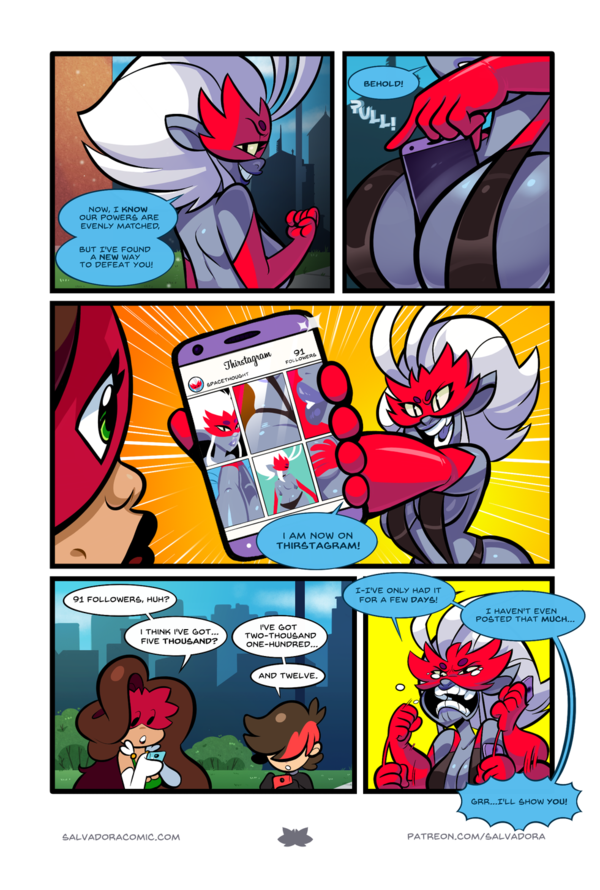 Wow! Look at all those cartoony huge female parts!

The art is cartoony, lending itself almost to taking from Ren and Stimpy in its facial features and expressions. Also to point out a minor fact, one of the superheroines is drawn "smaller" than most of the other superheroines as if to fill in a niche. I wanted to like the art, but it's overdone on the Saturday morning cartoon meets Maxim magazine feel. It left me feeling kind of confused. Were we supposed to ogle the characters or fetch bowls of cereal and watch the not so exciting adventures of a Latina superheroine? Another negative for the art is, it takes 2 people to draw it, one actually drawing it and another, who is a lady, to assist. I would like to know if she really is okay with all of this or is she hoping this will pay off sometime for her. 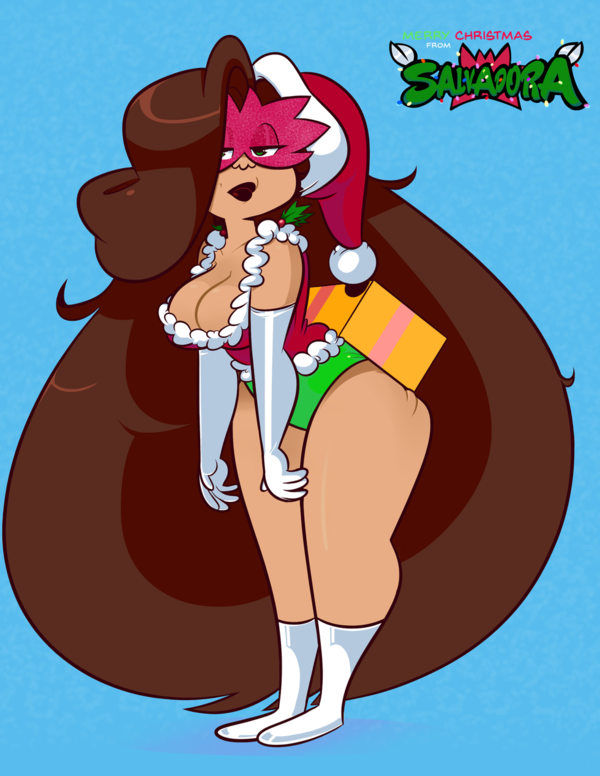 Good way to celebrate Christmas by drawing your superhero slut in red and green with a box on her ass. Nice message.

I just do not know where to begin. The jokes fall flat, the narrative is soupy at best, and hammy at worst. The whole thing tries to mimic industry comics, but the writing style is the lead weight holding it down. The character interactions need to be reworked, as does the fact that half the bad gal's raison d' etre is not even brought up. If the author is saving them for later, then he is making the wrong bet. Most of the jokes feel forced as if the author is writing them after the panels are done and not before. I'm not expecting Tolstoy or Dickens, but this is not very good. I can be a dick and say things like "my asshole can write a better story than this." But that would not be an insult but stating a fact. The story flow is inconsistent, jumping around to events that are either forgotten, never brought up, or doesn't exist in the first place. "Why does she want to steal the golden statue? Well, let's let the audience imagine a reason for it." No, readers want a reason, because leaving it to our imaginations is a bad, bad writing sin.

The Secret Orgins of Salvadora: Intro to Salvadora and two unnamed plot device villains. Pretty much almost textbook back story. Person wants to change life, person gets powers and person saves world. Nothing new or exciting, and marginally original.

A Day in the Life of Salvadora: Ho-hum, she fights crime, goes to school, mentions her crush once and rinses and repeats. could have been better if they actually fleshed out her love life, instead of just throwing a random dude in there to keep people thinking shes straight in a lesbo romp. How long until she munches carpet and likes it?

Intense Investigation: Oh my! We are introduced to the creepy stalker journalist roommate. How will this ever play out? Like it always did in the comics this trope was born from. Yawn.

Fast Foe: We meet the odd named villain (which Describes a person of breathtaking beauty) Pulchritudinous, who is a giant pun, for she hates how everyone is attracted to the thicc. Kind of good wordplay, but still the character falls flat after that. No real substance.

Alien Assault: We now get to meet Xatra, who admits that they cant win against each other, so she chooses the most near sexual things to compete with, I.E. Twister, competeing for likes on looks, etc. A very shallow character. Also instead of sending her home, Salvadora practically exiles her on earth, and as per all villains in this story, she escapes just like every other villain. Is Salvadora even trying to hero? 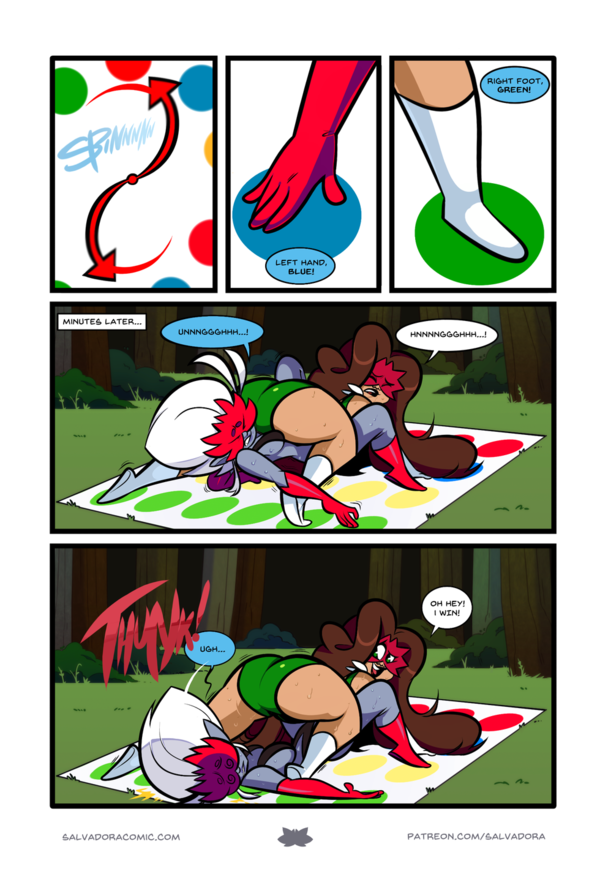 This is not Homoerotic at all. I must be delusional. :rolls eyes:

Hulking Hottie: T.H.I.C.C. sends in She-wah Gamma in as a teacher to keep tabs on the hero's and villains. Does not go well. We get to meet T.H.I.C.C. which is just Awesome and Cutie.

Looney Lunch: Salvadora and Finch beat up on Sunshine Savior. Racist much, its a Hispanic and LWG beating on a Black girl. Someone call Al Sharpton. This arc is just about Finch and Salvadora bonding over nasty looking food, finding out each others secret identities, and playing vidya. Did I mention Finch is a legal loli?

Selfie Showdown: Cheesecake, selfies and more unconnected and really weak storytelling. "Who has more followers on their version instagram? Who cares. Its filler at best and very weak at worst. Could have had a brawl over the selfies, but nope gotta keep it real with the weak storytelling.

Vivacious Voodoo: We get to see a new Villain, and of course it will replaces the two token black villains. And of course it will use the voodoo mama stereotype. Add in a clumsy gag, and you have a lackluster start to a new arc. Of course again no rhyme or reason as to why "Loa" wants to bring doom and gloom to Blissdale, but hopefully it is a better reason than a perceived slight against ones own beauty.

The writing is janky as Salvadora doesn't catch any villains, or does anything other than punch and flash tits or ass. Now I know it sounds like I hate tits and or ass, but that is far from the truth. However, I am not a hormonal teenage boy, like this comic seems to try and pander to. I like tits and asses just fine, if written into the story better, and not just an attention grabbing bit of fanservice. Suffice it to say, Stripperella had a better story, better written jokes and tits and ass galore in a fine balance of a full on cheesecake buffet. This story seems to try and be Stripperella, latina version, but fails hard at having a connecting plot or continuity.

This webcomic is written by three people. One artist, one assistant and one author. They have no trouble whoring out their other projects on Twitter. Also I feel this webcomic may be stalled, or possibly be removed in the future as each of the people working on this have other projects to work on.

This webcomic could actually be better, if they could stop using the cartoon style art, and world of bad puns and odd gag jokes that make things awkward to read. The art does not have to be perfect, but the over exaggerations are nauseating. "Oh look, that hero got thunder thighs and a thick booty." Yawn. Its stale and trite. Maybe also toning down the hero obsession from the journalist roomie down a few notches. It's creepy and the jokes revolving it are way too forced. Using jokes and gags as filler is okay, in small doses, but when you are lost for a plot point or device to move the story along, using gags is old. Like I suggested before, that the panels were drawn without a storyboard is evidenced in the way the story (doesn't) flow. And since the webcomic is released once a week, they do have time to storyboard. Please storyboard. Even if they don't change the art, at least write a story flows properly.