Disclaimer: Alex and his team posted a response on their site citing a few factual inaccuracies in this review. The BWW acknowledges this and the needed corrections have been made.

If you happen to like cosplay and random humor, Romantically Apocalyptic is the comic for you. If you happen to dislike cheap Photoshop tricks, drama whores, Fresh Epics, and lazy asses, then just read the review and move on with your life.

For the first time in a long while, we actually have a comic with a real declining point. Right around here, the author decided to take the "gag-a-day" format one step forward and delve into plot writing.

Sometime in an already post-apocalyptic future, people wear headbands connected to an MFG huge server which grants them the ability to surf the net from the comfort of wherever they are. The company controlling the main server is currently working on research revolving around improving humanity's lives using some guy as a genie-pig. For reasons beyond anyone's comprehension (readers, not characters), he somehow sneaked into the server's main terminal and damaged it by spilling hot tea all over its control terminal. This caused all wired people in the entire planet to go crazy and civilization to fall apart.

Sometime last Thursday, a guy dressed like a posh S&M fetishist started fucking around like he has brain damage and pissing off his only sane companions. They still remain together just because one of them has God-Sue luck which grants him the ability to get out of trouble, cause mayhem, and remain completely unharmed.

Any plot beyond that is hard to understand and even harder to care about. 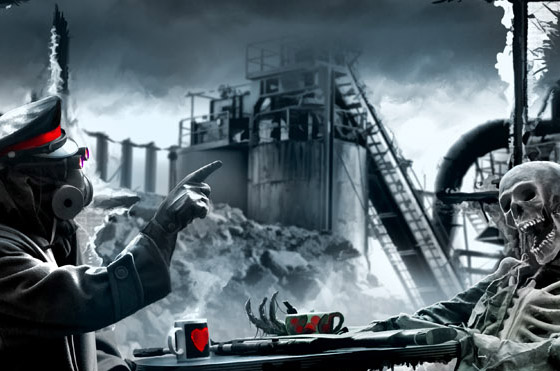 There actually is something to talk about regarding the art: Alexiuss has made himself a name for being a sort of "visual-scammer", so to speak. You see, all this neat-looking work is not real AT ALL. This guy sure is a gifted photoshop artist. However, the art for his comic comes mostly from Google image search (Correction, he takes the photos himself, not that it makes a difference), then it all undergoes a rushed smudge and filters treatment, has photos of people in costumes pasted on top of it (because if you aren't actually going to bother drawing the background then why bother with the characters?) then smudged to fit with the surrounding environment until you get the impression that it was actually painted.

However, this alone isn't what makes it bad. He's known for claiming that he is drawing it all from scratch. No questions were asked, and for a while, no one doubted him until some actual experienced people started suspecting that this guy wasn't actually doing any of this stuff by hand. He of course either denies it or avoids giving a straight answer, but no one (including us) believes him. This makes him both a lazy artist and a bullshitter.

UPDATE: He now admits it's all mostly photoshop but denies he even lied about it and has deleted all trace of the evidence. In a response he wrote us he said we made this up. Sadly for him, Web Archive is a thing and we can read the comments in pictures where he disabled them and therefore found this:

This is the picture. Should I save it in chase he tries to delete that too?

The entire thing reached a boiling point after a combination of white knighting for Tom Preston and a few call outs by Torture Device over both his fake art and his mass reporting campaign to remove a parody of Humon that TD posted on DeviantArt solidified his reputation as someone well deserving of the illustrious company of Fresh Epics.

So basically, he takes pictures of people in costumes, places them over stolen images, blurs the fuck out of them, and then lies about having done so. At no point does he actually draw anything.

This is where my tolerance for this comic starts to dwindle. Officially speaking, there exist a plethora of already written mythos done for this comic. However, just like Humon, THIS LAZY-ASS IMBECILE DOESN'T ADD ANY OF IT TO THE ACTUAL FUCKING COMIC! 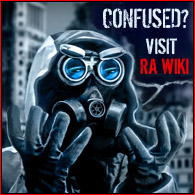 That's right! If you want to know what the fuck is going on, you've got to choose one of two options:

Just like Humon's fat ass, with whom he shares a spot on the Fresh Epics website, he expects people to read a motherfucking essay if they want to understand the plot. No, seriously, we are already taking the time to read the comic. NOBODY is supposed to have to read extra content just to fully understand the whole thing.

If you don't believe me, just take a look at his guest art pages. They are all the same thing, people taking their sweet time to make comics about the long-ass essay he's written elsewhere depicting the events we are supposed to care for, but are not even hinted anywhere in the actual comic. Now, these people show us some talent. Which mister Smudge-a-lot doesn't have any interest in developing. Reading those things give us the impression of reading another, different comic until we get to the point the characters morph into the Mighty Morphing Power Rangers RA cast. Now, THAT's to be a lazy fuck.

Now, about the humor. The humor is as random as random can be. Sometimes it relies on characters that do things just for the hell of it, sometimes the comic uses slight irony for laughs. However, more often than not, the unlikely circumstances that lead to the situations that is being used for laughs will feel forced. The problem is that we are all supposed to act as if it all makes sense just because the main character is a gullible moron. But that can't be an excuse for everything. There is a limit to how far far I am willing to go to suspend my disbelief for a joke. And that time is substantially shortened by the fact that the final joke is rarely funny.

The comic is trying too hard to be funny but failing miserably to make actual jokes that are not just random events. The main character "Captain" is supposed to be funny because he doesn't realize the situation that he is in, which leads to hi-jinks and causes frustration to his companion. But instead of being amusing it feels like we are watching a retard in a Darth Vader costume flail around. It's more annoying and tiring than actually entertaining.

He claims to be Russian so I am tempted to blame the bad humor on a language barrier or Vodka. Sadly, his English is fine and he just isn't funny. Besides that, he also claims to have invented a brand-new art style called "Dreaminism", thinking that a bunch of lazy shortcuts is something no one has ever seen before and being arrogant enough to believe he is some kind of artistic inventor for using them.

Being part of the Fresh Epics group entails being involved in a lot of drama. Our friend here has been known to get into flame wars for standing up against whoever criticizes his comrade's works and making some really poor arguments in the process. Some suspect that he might just be addicted to drama and all his arguments are just the common behavior of an unquenchable attention whore.

The best thing you can do to gauge this person's attitude is to check out this thing here (deleted it too but, again, we got it).

What is popularity? Popularity is SKILL.

Yeah... keep telling yourself that.

But this statement leads me to another issue: the fact that this comic is probably rip off of the Newgrounds series TankMen, and a far more obvious rip off of the webcomic "Gone With The Blastwave" (which is itself a rip off of probably TankMen and definitely Red VS. Blue). I mean... well... just fucking look at it! Come on! At least try to hide it a little!

The creator of that comic didn't accept guest art due to fear that his ideas will be stolen. Well, I am sorry to inform him, but it didn't stop this guy from doing it anyway.

When confronted with accusations that his comic shares the same theme, artistic style, artistic technique (although GWTBW's way of doing it was far less dishonest), and pretty much everything else with the abandoned comic, he responded with the same statement as quoted above: that his comic is better than that one because his site has more visitors...

Correction: Alexius and Co. informed us, quite correctly I must admit, that RA could not have been a knockoff of GWTBW because it predates it. So sorry for the false accusation. You are not an artistic thief, only very, very unoriginal.

On a final note I just want to mention that there is an unconfirmed rumor going around that Alexius brags about overcharging his stupid fans for merchandise. I don't know if it's true (I have been told the evidence was deleted) but I wouldn't be surprised if it was.

Alexius is a self-absorbed imbecile. His comic has garnered itself a fandom which I suspect consists mostly of people with a gas mask fetish (that's probably how TD found out about him in the first place), people who just like pretty pictures and those looking for cute new cosplay ideas.

He definitely MUST work on his storytelling skill if he ever wants to be more than role model for artists who don't actually know how Photoshop works, but this comic seems to be beyond the point of no-return. Nothing in the world, not even all the guest comics, can make it good at this point. That said, the only reason he's got any fans is merely because of his comics visuals. We can't really deny they are bad or anything. They can be interesting to look at, but just that. Without humour outright taking control of the situation, we can watch some interesting visuals about a overly smudged post-apocalyptic world. But that is all. And that alone doesn't make a comic. It doesn't matter how much a cheap hack of a fat hag tries to convince you that it accounts for storytelling.

If he had kept with humor alone there could have been a small chance for this comic to be something semi-decent. Yet, following the examples of his peers, he only managed to sink his own work even deeper into the proverbial abyss.

MakarovJAC - I have no intention of linking to his website. Be grateful, I am doing you a favor.

oddguy - Scratch that. Check out this hilarious response he put up instead of one of the pages this review links to.