Okay, we originally thought that Mason "TailSteak" Willson was the webcomic's author. Actually he only does the artwork, and was not even the original artist for this webcomic (there were several others before him). Whether or not he has contributed to the writing itself is uncertain, but seeing TailSteak's artwork on this webcomic in the first place is what drew our interest to it.

Actually the webcomic started out badly and got better.

The webcomic starts off with some one-shot joke strips, drawn by TailSteak and added long after the actual webcomic story had begun. Then comes the introductory webcomic story arc introducing our main protagonist John Brown and his D&D friends, then comes the first story arc. (Don't ask what the Sergeant Pepper's Lonely Hearts Club Band Beatles have to do with Dungeons & Dragons, a game not invented until years after the Beatles broke up in 1970.) And then comes a belated Christmas special, which is not even continued until an entire year later, and with a new artist at that. But this person does not stay on either, and another new artist starts the next story arc about the Harry Potter And The Deathly Hallows movie and after that comes a violent vegan activist known to John Brown whom he has to get removed from the mall he works for.

Okay, Nickabocker finally gets TailSteak as the artist, and furthermore, it turns out that John Brown has a second career as a professional wrestling referee, much to his D&D partners' shock. (It would be very interesting to know if this story twist was Nickabocker's or TailSteak's idea!) On top of that, John has found a female friend named Iris who is also a professional wrestler. But Iris is not without personal problems of her own. However, there are problems for John that she knows how to deal with. But John finds that there is another damsel in distress among his friends. The author does a strip where he talks about "The Day World War One Stopped", but the preaching abruptly stops and John and his friends are invited to a wedding that our heroes really don't want to attend, but they go anyway. And there our heroes are not exactly on their best behavior, and after that is over, Sebastian, who had tended bar at the wedding, comes by and wants to join the D&D group. And in the next two panels, we see our heroes actually playing the D&D game! (As already mentioned, this webcomic so far has had little to do with the characters actually playing D&D.)

A new development comes when John's estranged father arrives at the flower shop John's mother works at (and who is divorced from the mother). Their initial pleasure, however, quickly sours when the father tells than that he has sold their house out from under them to pay his debts. The father walks out, and though they could have fought the eviction in court, the mother decides against it and returns to her own parents, leaving John to move in with Iris. The next story arc has Iris, John, and their D&D friends go on an outing to a beach where the gay Sebastian hits up on John, and John suddenly discovers his secret homosexual feelings and he and Sebastian become gay lovers.

Just kidding! This isn't some wish-fulfillment gay furry webcomic like ClosetCoon or Darren And Jason. Though Sebastian tries his hardest, John finds that he prefers being in the company of Iris. Then Iris brings in an old friend for a new professional wrestling match, but it goes awry. Fortunately not too awry (and there is no romantic rivalry going on between Iris's friend and John). In fact, the next event is that they unintentionally see each other naked in the shower.

Okay, I'll stop right here. Why? Because I was expecting this to be an awful SJW webcomic like Leftover Soup, and Roll To Save is not like that at all. Not a classic, perhaps, but as explained below, hiring TailSteak as the illustrator ironically enough made this webcomic much better than it originally had been, to the point that I decided to place this in the "Not Bad" category of reviews.

I shall begin this part by posting an excerpt from the "Art Review" section of Leftover Soup:

The art is serviceable. It's done in a very cartoony style, with stylized humans - but you're never in doubt about what expression or emotion they're supposed to be conveying. Sure, the faces are somewhat same-face-ish, but every character design is unique enough that you're never in doubt of who you're looking at.

It all seems to be mainly done as vector art, which allows for some easy copy-pasting every now and then, but for a slice of life comic it seems very non-offensive as a lot of it is just characters talking to each other. The art also improves from start to finish, mainly in the introduction of better shading and the faces becoming a bit more expressive, all things one would expect from a 1000 page comic run.

On a plus for the art, the TS seems quite capable of drawing different body types quite consistently - from tall and gangly to short and stocky. There's very little to nitpick here - at worst TS could be accused of failing to use his art for visual storytelling very much, though that tangent ties perfectly into the next section because boy does TS have so much stuff he wants to tell us... so much more than what he can fit into the webcomic, or what's even relevant to fit into the webcomic.

Okay, so how does the artwork of this webcomic compare? As might be expected, TailSteak's artwork compares with the type he did during the latter part of Leftover Soup's run, though after three more years it did not improve much further. 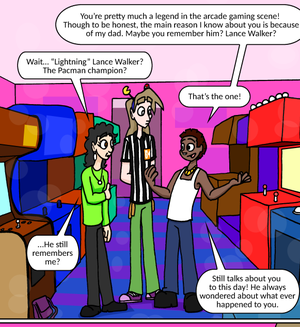 But it was not TailSteak who was the original artist for this webcomic: 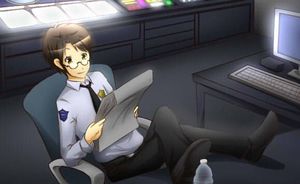 Artwork from the original artist.

Then another artist replaced this one: 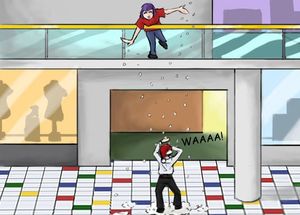 And from the short-lived successor.

And yet another, before TailSteak came along: 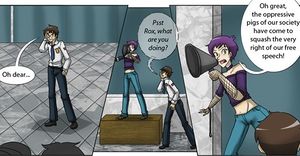 And from the next short-lived successor.

The author explains that he was unable to keep hold of the artists prior to TailSteak because he couldn't afford to recompense them. Evidently he was able to get TailSteak on the cheap or something.

The webcomic started out poorly, not only due to schedule slip from the high turnover of illustrators in the webcomic's early days, but due to the fact that the webcomic's original premise of John Brown playing Dungeons & Dragons with his friends and falling asleep all the time just wasn't very funny in the first place. It was not until Nickabocker was able to find and keep TailSteak on as the illustrator did this webcomic finally get off the ground.

Whoever came up with the idea, John Brown being revealed to have a second job as a professional wrestling referee was a gimmick that worked. Not only because it was such a surprise, but because the story actually gives a detailed explanation of the professional wrestling business. (Professional wrestling may be fake, but it's more dangerous than you might expect.) Introducing Iris as a new protagonist and possible love interest for John Brown also expanded the story and added depth and interest to the characters' lives. It was also refreshing to see, for a change, a gay male hit upon another male only to find his target completely failing to return his romantic interest.

Nothing besides the links provided above.

Talk about irony. For making such awful webcomics as Leftover Soup and Forward, TailSteak would prove to be the savior of this one, if for no other reason that he didn't run off like all of Jim Nickabocker's previous illustrators did.

As mentioned above, this webcomic was dull and confusing at first, but when TailSteak came aboard as illustrator, the story expanded from its initial narrow limits to one where you find yourself taking interest in how the story proceeds and wanting to know what happens next. Not a classic, but an initial turkey which would become much better later on.