Unknown. This webcomic was reviewed back when the BWW was on Wikidot, but the content didn't survive the transfer.

Early 2021 webkilla came across the review while pushing the Random Page button - and thus... well... shit is bad, still needs a review.

This is American Wrestling drama, as drawn by someone who clearly spends more time fapping to his own artwork instead of writing good stories.

If you're not familiar with American wrestling - then... well, good for you. It's terribly silly, though I'm sure it can be fun too. Thing is, it is of course entirely staged.

This webcomic fails to acknowledge this. This comic tells its wrestling story about an up and coming new wrestling prodigy Ultragirl, who fights in the women's league called "Rival Angels" - but it treats the usual on-screen wrestling drama as real life drama in the comic's setting.

This means that when a group of "evil" wrestlers assault Ultragirl outside of a nightclub that "grudge" is settled in the ring, instead of you know... calling the fucking police. To this end, the setting makes no fucking sense what so ever. Realism went out the window from the get-go. Indeed, the problem with the webcomic not actually acknowledging or at least lamp-shading that this is either all staged, or not how real life works, makes it really hard to take accidental implied nudity or accidentally dating another team's referee seriously. At one point, a Ultragirl is dating a heel and a child spots them at a restaurant - where they then pretend to get into a fight. It's as if the webcomic can't quite make up its mind whether the characters know it's all pretend, or if it's a comic setting where wrestling drama is the reality. Because the club-assault would say its one, while the restaurant reveal says the other.

Suffice to say that the "drama" in the comic is hilariously forced, with face-heel turns in the middle of fights straight out of... well... American wrestling. It's stupid shit for stupid shit's sake - and with the webcomic being unclear on whether the characters are in on it or not, then its really fucking hard to take any of it seriously.

To this end there's no real point in talking about the plot. It's all "oh hey, your next fight is against wrestler X, or team Y, they sure look tough" and then hey it looks like Ultragirl and her friends might lose, but nope, they win in the end - rinse and repeat. It just goes on and on... with the odd bit of drama happening behind the scenes when not in the ring.

The story ended with Ultragirl, surprise surprise, winning some big fight - and after that Albone just started making pin-ups

Early on in the webcomic you get weird hands, fucked up faces like in the last panel here, and obviously traced artwork like in the second-last panel shown here. Also, behold the glory of Simpsons-skin.

Additionally, the panel structure is quite often a mess, and for a webcomic about wrestling fights, you'd think that the artist could do action well? No, he cannot. It doesn't even get better with time, just look at how frozen these poses come off as. For a webcomic a about wrestling, this lack of a sense of motion in the artwork makes fight sequences look incredibly disjointed. How did they go from panel 2 to 3 there? Later on in the comic the artist starts doing these half-faded images to sort of give the impression of motion but even that sucks balls. Also, behold the glory that is blow-up doll face in the top right corner here. 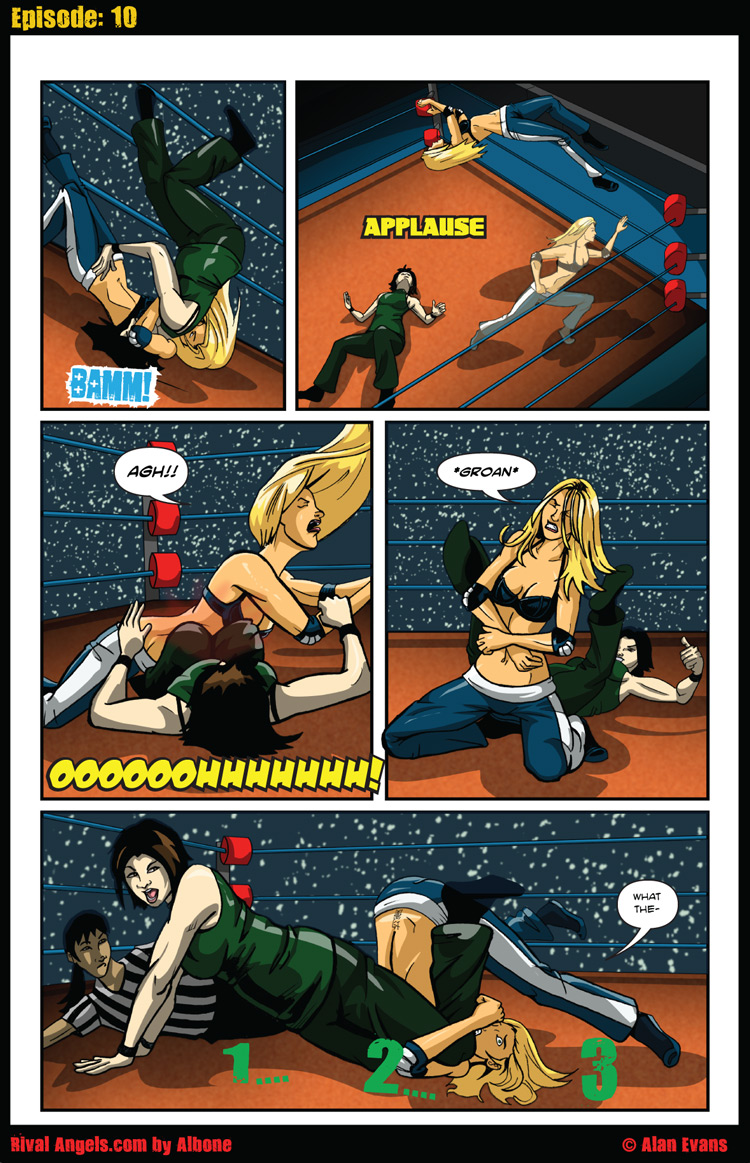 A page from a fight sequence in the middle of the webcomic. Can you tell how the action went from one panel to the next? I guess it helps if you're a wrestling fan who knows the moves

And lets be honest here: A wrestling comic where the action looks like frozen snapshots with no real sense of motion is absolute shit. This kills the webcomic. No wonder the artist just posts lewd wrestling pinup on his Patreon these days, instead of making comics.

The writing is trash. Forced drama for drama's sake, with paper-thin characters that have no depth. The bad guys (the 'heels' as they're known in wrestling) are evil just because they evil, and the hero girl is good because... good? There's the slut who bangs management to stay in the game, there's the stereotypical Asian girl called "lil dragon" and so on.

It's basic bitch teen drama, with people getting upset at each other for no reason, villain wrestlers being villains because... that's just what they do - the slut talking about how she had to blumpkin her way out of the training league, and endlessly repetitive gags where Ultragirl gets ambushed with a folding chair after almost every fight she wins.

It's not original, it's not really funny, and the good girl ALWAYS wins and the bad girls always loses. It's boring and predictable writing.

No clue, but he claims to be a long-time wrestling fan, who is also into MMA and UFC. It's a bit unclear if Albone does both art and writing, because in the about page a Justin Riley is also mentioned, where it says that this other guy does "the written word" - so a fair bit unclear who does what exactly.

Judging by the Rival Angel's Patreon, which at the time of this writing only has 38 patrons, then not that many other people care to get to know these two jokers.