Rise of the Equestrians (Maya): The Lunar Eclipse

From The Bad Webcomics Wiki
(Redirected from Rise of the Equestrians (Maya): The Lunar Eclipse Act I)
Jump to navigationJump to search

Thank you Spazztic Bunnyhood for giving me some new material! After looking for Disaster!, she came around and told the BWW that the Brony-nation had attacked once again. But this time, it wasn't just a human entering a whole new world fanfic/crossover/whatever the fuck it ended up being; oh no. This was an actual epic about ponies fighting over who loves the author more!

Oh dear, me thinks we've mades a grave error in judge-a-ment. Still let's see what went wrong and see where we can improve...

See the word downfall means that the comic had a point when it was at least tolerable. As far as I know, this comic has always been pretty garbage; but what really sealed it for me was the third page- Oh i'm sorry. 'Episode'. Christ, it's like you're planning to make this a fan-made series.

This story has two arcs so far, and it's more than likely there's going to be a third one on the way, maybe even a fourth. Rest assured, I didn't make it through the first one and didn't even bother with the second. But fear not my friend, I have found a solution!

One of the very few good things that this webcomic has to offer us is that the author actually bothered to give us a summary of the entire thing. I'm not joking, he really did. So, in the words of the rapping dog from Titanic: The Legend Goes On (Look it up):

'You know there's something

So i'm gonna tell you so.

This story starts off with an odd dream that the Protagonists, Lady Maya Doi, been having for several months of a Young Alicorn girl crying on the moon while a shadowy figure merge from the ground and swallow her hole.

"One day after having that same dream, Maya was invited to go to Canterlot for a meeting of an upcoming festival, this where Maya first meet Princess Luna (The Antagonist.) After the heated debate between Lady Maya and Princess Luna during the meeting and a huge fight on the hallway after the meeting, Maya decided to sneak in Canterlot personal Library to learn about both her and Princess Luna's pass. Who she learn from Luna's elder sister Princess Celestia has drove both Maya and Luna to a decisive fate."

Riveting huh? Well, there's another whole act to go; so...

And needless to say

The feast is taken,

That was from Tentacolino. Again, go ahead and look it up.

"After Confronting Princess Luna in one of her dreams. Lady Maya Doi must now face against The Moon Goddess of Equestria herself and try to convince her that she is the reincarnation of her long lost companion. However, the more the two of them fight each other, more of their memories will come to surface clashing against one another, causing both of their mental stability to deteriorate."

Wasn't that fun kids? No? Well, how would you like to know that this is only the bare surface of the Earth? What the author didn't mention was..

Why in the world the ponies are accompanying the humans!

The times the characters were in their underwear/bumping ugglies outfits.

The fact I can't tell if the Gary-Sue character's name is Maya or Axel.

The other fact that Luna and Twilight both love the Gary-Sue.

How this is basically a high school love triangle with ponies and magical humans.

Like with Disaster!, this comic uses 3D software such as Poser Studio and Daz. Now, here's the thing with me; if you want to use 3D software to make your web comic, that's absolutely fine with me. However, if you're going to do so, actually know what your doing and what you're making.

In the case of this comic...it's actually pretty good.

I'm serious here, the art is not that bad. The backgrounds look fine for what they need to be and feel like they would belong in Equestria.

The ponies also look fantastic in this one as well, but then again; it's not that hard to make good 3D ponies. 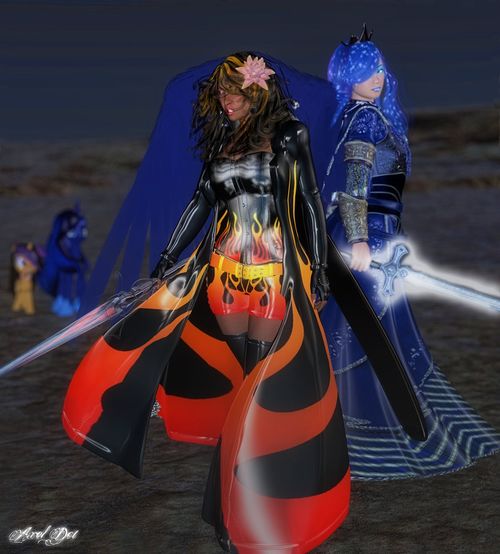 Axel knows how the human body works and how everything should be posed to make it work, and he does it pretty well. I do have a few issues though, sometimes the facial expressions can get a little wonky (especially on the human Twilight Sparkle and Princess Celestia) and when the characters start breaking into tears, (and believe me, they do it a lot) the tears look rather unrealistic.

But my other really big problem is that all though this art is pretty good, the talent of the artist itself feels wasted. This is something that could be fit for typical epic/fantasy comic, or at the very least, an adventure. Not a poorly written MLP web-comic.

Speaking of writing, Holy crap is it ever bad. The story is supposed to be this epic poetic tale of true love, (I think that's what we're going for) but it comes off to me as wanting to be the 'master-class' of writing. It's not.

In fact, hear me out. I think feels much more of a love triangle you'd find in a high school drama rather than an actual epic. Think about it; Princess Luna used to love Maya 'Axel' Doi until one fateful day, when the fire-nation attacked...

Maya 'Axel' Doi starts having awful dreams about Princess Luna on the moon, starts distancing himself from Luna and starts hanging with Twilight Sparkle, After many years away; Princess Luna and Maya reunited because of a meeting. But it turns out Twilight and Maya have been dating for a while now, Luna is pissed and decides to take action.

Yep. That sounds like something you'd see in high school to me.

The characters are also really half-assed. Especially Princess Luna who goes from a sympathetic fallen hero turned villain turned hero again, to a enraged, unstable, bitter woman, Twilight Sparkle is regulated as 'Axel's' love interest and every other character ends up serving little if any purpose at all.

Now that I think of it, why are the pony counterparts of the humans there in the first place? They serve no purpose and are only there so we can hammer down the fact that this is a MLP web-comic. Want a solution?: Either you re-make into a pony-based comic, or you drop the ponies and stick to humans. Unless if they manage to serve the plot in any way, they don't need to be here.

And then there's Maya 'Axel' Doi. He is the one and only protagonist of this comic, and he is every bit of a Gary-Sue/wish fulfillment character as it gets. Everyone loves him, and anyone who doesn't like him sucks balls. (except for Luna who is evil because he dumped her for Twiley)

One last thing; There are some misspellings during the story, my personal favorite? "Princess Celestia may requested you to become an Equestrian, but I was the one they let Rarity extract your DNA and ercated your unicorn. I would never thought it's going to upset you the way it did"

That is just awesome. Amateur-ish, yes; but still hilariously awesome at once.

Axel Doi is the person who created this webcomic, he is in the good ol' U S of A and has been studying graphic arts for the last eight years. As far as the internet is concerned, he seems like a pretty nice guy. No real drama, no problematic behavior... (as far as we know) Though I seriously have to question some of his pastimes. (Seriously, Hentai anonymous? Dude, you do know that's child pornography right?) I really hope after this web-comic is finished, he continues his graphic arts work. I also hope that if on the off chance he does make another web-comic, he try to learn how to create a story. I'll be happy to help if he needs it.

Final thoughts and comparison to Disaster!:

This webcomic was a mess. Yes, the art Is good; however, it does pretty much jack. With a story that screams 'another day of high school drama', a character being derailed to the tenth degree, a Gary-Sue that only serves to be wish-fulfillment for an otherwise seemingly decent person's ego and how everything feels so pretentious, high-art, poetic when really it's not makes this all the more hard to sit through.

And the fact that this is the second one of these comics I've done a review on makes it all the more saddening.

So the million dollar question. Is this worse than Disaster!? That depends.

Art wise: No, hell no. Axel Doi is much more capable of doing 3D Models than Pononimous ever was. Hell, i'd be happy to give him a commission if he does those sort of works.

Writing wise though?: It might just be, while Disaster! had many plot-holes and confusing elements littered into the story; at least it tries to be funny, tries to do serious moments with some sort of decency, and at the very least; it's not trying to paint something so typical in a high-school movie as an epic tale of warriors.

Lunar Eclipse? Well, it's the opposite.

If I have any words to say to Axel, it's this. Once you finish this comic, if you decide to make another one; try something less grand of the scale size, or try your hand out at comedy, You might be pretty good at that. Or if you really want to, take some writing tips, get some drama books and learn how to write drama; because from what i've seen, that's not exactly your thing.