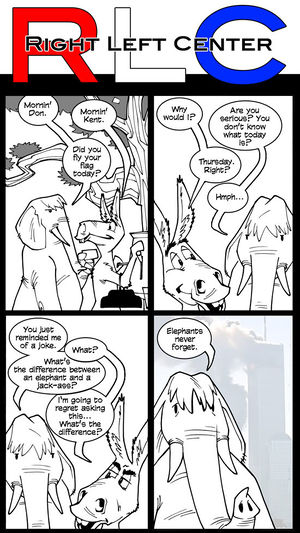 This is the only page of the deleted comic I could still find... Thankfully it's also the most stupid.

The most ludicrous thing that people talked about when Obama's victory was assured and pundits were about to hang themselves was "Now that George Bush is leaving, what are you going to make fun of?". Most normal people didn't worry about such a stupid question. Apparently, some people did. Mike, mostly known as "Hapajap" on the internet, took it upon himself to mold the new president of the United States into an endless barrel of fun, even if that required to shut down his previous comic and engineer one so cheesy, so biased, so hypocritical, so low, that the fact that a joke was coming down the lane or not didn't matter its readers.

Right Left Center is a webcomic so bad, its author actually has deluded himself into thinking he doesn't need to update to earn profit from it. It is so biased, the blog posts garner a much higher attention than anything he can scribble. So cheap, it would put DBZ to shame. So annoying and fake, people would have more fun betting money if Hapajap is either full of bullshit or horseshit (or elephant shit, since he's Republican).

Behold, the apocalypse of humor.

Left Right Center is a webcomic about an elephant (Kent) and a mule (Don), both symbols of the Republican and Democrat parties and the way of thought of their subscribers. Since this webcomic is so damn formulaic and repetitive, you can sum up the structure of any strip to this:

I just saved you the trouble of reading their entire archive. Not that it was long or anything, but still, that's all there is.

In my most tolerable day, I would put the first two months as "not the worst I've seen". Although there is a lot of Obama and Democrat bashing, there are spare moments where you can see a balanced field. There are even a couple of strips where Don beats Kent, especially this one.

However, it all goes to shit when the strip takes a definite turn to the right, and Obama is openly mocked in a strip that draws a line with both communists and Hitler at the same time. From that point on, not only is the only joke of the strips "Obama is a communist", but the supposed Democrat representative is degraded to the point he can't make any kind of point and is just an open shooting range for Hapajap's hatred and political bias.

It's hard for me to hate the art of a webcomic so fervently, but once again Hapajap has proven he can piss off anyone. The art in itself is not horrible, but it suffers from something I never thought I'd see in webcomics: Hapajap constantly uses the same drawn panels over and over again for every strip. It comes to a point where it's hard to find strips with one single original panel. This exercise in laziness transcends all barriers. Even those who often complain about sprite comics can surely say this is the worst shit they've ever seen. At least spriters use different sprites in every panel! Hell, even Buckley re-assembles his characters and background at least once for every strip! This guy does not even do that! It's lazy art that's horrible to the extreme. Even Toriyama would puke at this display! Whoever makes such a blunt practice of "not giving a shit" doesn't deserve to cal himself an artist, no matter how good he can draw.

True, no political cartoon is ever fair to both sides of an argument, and everything from the most central newspaper one-panels to the biggest hardlines of political magazines are defending an argument. Their argument, I hope. However, Hapajap couldn't even do that in this comic. He pretends to have an ultra-right political stance, but his arguments are so stiff, so stupid, so unoriginal that he must have taken them word by word from some other political blog and then invented a stupid Democrat strawman to try to deny them for humor, which he too fails at.

This is nothing but propaganda. Most strips try pathetically to inject some stupid Republican idea into our minds. Maybe it will be a strip defending the stance against gun control with the most tangential world news ever. Maybe the strips tries to address that only Republican patriots honor the victims of 9/11. Perhaps Kent the Elephant is eager to affirm their is no unity under a Democrat president and that Obama's whoring out the country, which he not-so-secretly hates, in a fast lane towards Facism/Communism! (Yes! Apparently, those are possible together!)

Let's fixate on some, shall we? Particularly this one. See, in this strip, Kent's point is that Obama wants to buy votes by promising to cut taxes for the poor when he gets elected. This, of course, is a scandal and simply unthinkable, because no Republican ever has done that. Except for George Bush. And Reagan. And almost any Republican candidate, including McCain! But that's just it, right? Hapajap, like many other Republicans, is bent on separating himself and his party from George Bush, because he turned into one of the most hated Republicans in World History. In fact, I'll let you into a little secret. From what I heard, the very last speech from this strip used to look like this, but the simple statement was so... uh... correct, that he had to edit it into the ambiguous anti-democratic phrase it has now.

RLC doesn’t take me that long, and I won’t be doing it daily, it’s just an exercise is expressing my frustration. heh. Spread the word!
Emphasis by Seagate

So, I don't even get to infer you're a hateful, frustrated propagandist? You come and tell it to me in my face? I guess that's the end of that argument. Carry on.

Hapajap, whose first name has been traced down to be Mike, was until recently known for his webcomic "Electronic Tigers". Said comic was already openly roasted for its political bias. It even depicted its Democrat strawman like a stupid and totally gay fatty, in the purest Jack Chick style. He was openly mocked and dazzled by a little nerd and a hot half-Asian chick named Mika. Many people openly argued his stands against evolution, which he defended with such brain-dead phrases such as: "if we evolved from monkeys, why are there still monkeys?"

He now has shifted his attention (so to speak) to Right Left Center, a webcomic so simple and formulaic I can't possibly believe he can't update it because he's busy. What's so hard about updating this tripe? All he has to do is listen to Rush Limbaugh for five minutes and write it over the images of the last strip. He has engaged in several beautiful rants like supporting a letter about Republicans divorcing from the country now that it's run by Democrats, which generated sweet drama and LULZ. One guy even offered Hapajap $300 to at least try and write a fact-checked essay to support his beliefs on Obama being a terrorist, which he obviously rejected. But not because he didn't need to prove anything. He rejected it because it wasn't enough money.

Basically, every post he writes or draws generates a new shitstorm. The hatred towards him is so big he has joked that he gets the same amount of hits whether he makes an update or not. What a nice thing to be proud of... Besides, those 2.00$/day ads on anti-Obama shirts must be either his or from a friend, 'cause no idiot would bid on that banner space when the other side can barely scratch 2 cents together. Perhaps this is hidden message. You see, the cheap side is the left side, get it?

This probably my most vitriolic and hateful review in a while, but give me a fucking break! This guy insults everything that people wanted and asked for. Need I remind you that both times George Bush got elected, he barely made the cut, while Obama smashed McCain? All we have here is a very sore loser who rants on the same 4 panels over and over about how 52.7% of the country (and 68% of the electoral votes) must be either retarded or dead wrong to get Obama on office, an almost satanic communist/fascist that is doing everything wrong and destroying the country, unlike other people he believes in.

His obvious bias, strawman arguments, and wish fulfillment are shockingly obvious in this comic, but it can't be helped. It seems people like him only care about opinions when they are his own, favorable to him or just mindless adoration.

Damn... that must be why all Political Webcomics are Bad.

[Note: Since this review has been posted, it seems as if Hapajap's arguments have proven prophetic after all. And BTW, most incumbent US Presidents get elected by a large margin, if the public is satisfied with them-which was not the case with Obama, as the figures clearly show. Long Tom.]