Greg Dean started the webcomic Real Life way back in 1999--precisely 362 days after Penny Arcade's humble beginnings. Back then, its art was actually as good, if not better, than what PA was making - Check out the difference between this Real Life comic and this example from Penny Arcade. Linework from RL was smoother and cleaner, and although it was black-and-white, it had some semblance of quality to it. So, in spite of making amateurish mistakes - like breaking the fourth wall in its initial strip, ahem - Real Life certainly had decent beginnings. It was nothing special, but it had potential.

Mary Sue Greg goes about on not-so-fascinating adventures with an ever-changing cast of characters. It's basically a Greg Dean blog. First he had a girlfriend in Crystal Hoff. She was a somewhat tolerable character. His current wife, Liz, is portrayed as a domineering bitch, for lack of a better term. There was also Dave, and Tony, and a bunch of other characters. Characters other than the main ones were "played" by a character Dean himself invented, named Alan Extra, because apparently that is witty, ladies and gentlemen.

Now that he's married, most of the material Greg covers revolves around that marriage. It sucks. I haven't read this comic in at least a year, so I'm not much of one to comment, but really, if it's anything like the many I've seen, chances are it's going over something I really don't care about. Since most of you probably don't care either, I'll skip the rest.

UPDATE: With the comeback, the comic now revolves around Greg's transition to being called Maelyn (If that sounds like a made-up name, it is - it's the name he gave every female videogame character he played)

Basically, Real Life has never changed. Whereas Penny Arcade's Holkins and Krahulik have vastly improved over their humble beginnings, Real Life has stuck with the same poor storytelling and mediocre art it's had since the beginning. Although today it has added color and shading to the original style, well... I'll say more in the art review.

This art is the classic stereotype of "mediocre". This comic is digitally drawn using Adobe Illustrator. It looks boring and awful. Dean's depiction of mouths are downright ugly - they're essentially Adobe Illustrator-created parabolas, twisted into whatever expression his characters are making. Because they actually change from panel to panel, his mouthwork is marginally better than Tim "B^U"ckley's. Unfortunately, in most strips, the expressions are simple and as unexpressive as his artwork anyway, with most comics having expressions similar to the following example: The characters sport neutral expressions in the first panel, clueless glances in the second, Mary-Sue-Dean giving a sly grin in the third, and mild irritation by the other characters at whatever pablum Greg has spouted in the fourth panel. It's pretty bad. Like I already said, the current work is only slightly better than CAD, and when you gotta compare something to that pile, you're really scraping the bottom of the comparisons barrel.

If the mouths are bad, the other elements are truly atrocious. Copious copy-paste, bland backgrounds, and Google images are bad enough. But, when every character has the exact same facial style, and the only thing each has that is different from the others is hair and clothing, it's just ridiculously bad. Real Life fails on all these counts.

Perhaps a diagram is in order. 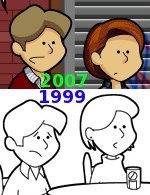 The more recent picture might be a bit old, but rest assured he hasn't improved a bit. It's been ten years and all he's managed to do is add some primitive coloring. And the women in that example? No, they're not the same person. Greg Dean just can't draw. 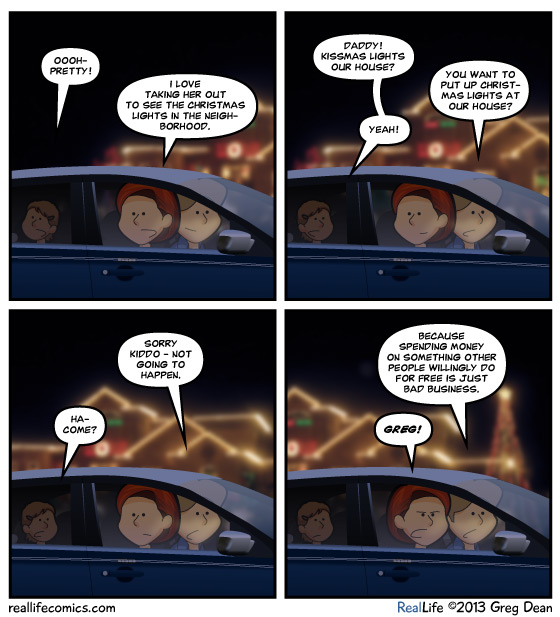 Poor and boring. Mr. Dean is attempting to turn his own life into an interesting, entertaining story with Real Life. It doesn't work. In terms of humor, this is about as good as any "decent" Wordpress or Blogspot blog. Mr. Dean attempts to use fantasy elements, such as space stations and time travel, to introduce something approaching entertainment into his otherwise turgid writing. A lot of webcomic illustrators do this. Unfortunately for these poor souls the problem is not the subject matter. The failure here lies in the artist himself, and his or her inability to turn a storyline into something interesting and unique. Mr. Dean's comic was fresh and acceptably refined in 1999 but it is rapidly decaying. It's the type of comic that's easy to read, yet so devoid of entertainment value that it's a pain in the ass to even give it a chance once in a while. And that, of course, does a bad webcomic make. With the move to chronicling his self-mutilation, the comic now has an audience of basically Greg and his few remaining friends.

Dean himself is not even an accomplished artist. When he started his webcomic, he was working refueling private aircraft at a small airport in California. Since then, he's quit, moved to San Francisco, went to culinary school, and moved once again to Lockhart, TX. My understanding of the situation is that he makes a living drawing the comic. How do I know these things about Mr. Dean? Because this is what his alter-ego Mary Sue has done in his comic. Again, this is really just a blog. Any deviations in the plot are exceptions to that rule. In 2020, the artist decided he was now a woman named Maelyn and has begun chronicling the infliction of his madness on his wife and two poor children.

If you're called to explain Real Life there's only one real way to describe it. It's mediocre. Nothing about the webcomic is great, nothing is eye-ravagingly terrible, and nothing bears reading the webcomic to any extent. It's not anime, it's not video-game related, it's not sexual, it's not new, it's not propaganda or prejudiced or pretentious or violent. It's just boring. It's absolutely brain-bustingly tedious, boring drivel pieced together with no interest of entertainment or artistic expression. It is the ultimate webcomic blog. You might think it's worse than a First Circle webcomic, and you'd probably be right. But, as it stands, I'm perfectly happy to just let it sit there, until the day the servers quit, the fans leave, Greg packs his things and quits the webcomic once and for all. Till then, it stands as the most nondescript and uninteresting webcomic of all time. And in a field full of nondescript, uninteresting webcomics, that's really saying something.