While reading the Wiki's reviews, my mind remembered a webcomic that I stumbled upon years ago. I was certain that someone on the Wiki's forums brought it up, asked Webkilla for his blessing, received it and went on to craft a well-deserved review for this wreck of a webcomic. So, I typed the Wiki's search... Nothing. Not a single review nor mention.

"No way! This webcomic has been around for nearly a decade and a half and it didn't have any major improvements implemented ever since its creation. It meets the criteria of a bad webcomic. Why isn't there a review in this domain already?"

After this confusion-filled monologue, I started digging on the forums and I, eventually, found something. The comic was nailed down in the forums' most wanted list in 2017. However, for reasons that have now been lost to the Shores of Time, not a single minute of effort was put into a review.

So, here I am, doing something that had to be done years, and oh boy, let me tell you...

I would rather play War Thunder, a game notorious for its Nerve-Wrecking, Soul-Breaking grinding than read a single page of this comic.

Some say that it always sucked, while some other say that its downfall started at around pages 150~200.

One fact is true though: It sucks, and painfully so.

In Fawnamere City, a CUNT by the name of Chrissy McCloud (how original), moves there to study Graphic design. From there on out, the story becomes a massive, convoluted mess full of ninjas, very stereotypical anime and college shit in which it can be refined into a fine glass of enraging wine. Mid-way, the comic drops its previous genres of action Adventure and shit for relationship talk. Oh and lots of sex talk.

Lots and lots and FUCKING LOTS of sex talk and fanservice.

I REALLY don't feel like summarizing or telling the story, because it is such a convoluted mess that it cannot be explained. At all. I will explain later as to why it is such a mess, in the writing section.

Your typical, run of the mill, Katbox-standard art expectations, this time, with Animu season in it...

The early art is meh at best and not good at worst, with backgrounds being Real life images that slowly shifted away to meh backgrounds, with some quite a decent amount of them bearing traces of copypasting. And also stolen assets... However, the character art had some sort of "Uniqueness" compared to the sea of Badonkers that Katbox was. The art improved at around pages 150-200. After that point though, very little changed. 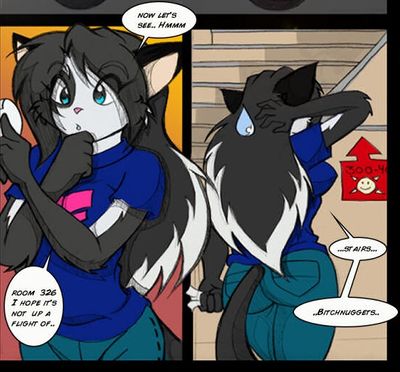 Recent art is very Chalo-like (I will elaborate in a bit), with heavy doses of animu in it. Anatomy is somewhat all over the place, with an extreme case of sameface syndrome.

Now on the Chalo part, here is the explanation:

Chalo is the artist of the Las Lindas webcomic, a piece of work that can be "best" described as Fan Service Extravaganza.

His character-art-anatomy is all over the place with "Jiggly jelly anatomy", an extreme case of sameface syndrome, along with them being shaded so smoothly that they all seem to be made out of skin despite the characters being furries. You know, FUR? Plus, at times, his characters' breasts are given blushes or shine despite the "fur."

However, the most distinct feature or should I says, features of his art, are the "Balloon tits."

Like, a decent amount of his characters are packing some serious honkers. A real set of badonkers...

You get the idea.

Anyway, reason why this detail is so important is because not only, do Godai's characters have wobbly anatomy at times quite often, not only, do they pack some big ass ammunition racks, but Godai's artstyle in general is very similar to Chalo's artstyle.

Just do a side by side comparison and it will just click.

That is not the worst part of the comic though. That title belongs to the writing.

This shit is just horrible.

Let us start off with the writing in general. The writing is just dogshit, with acute levels of Anime stereotype poisoning, along with other bullshit such as, Ninja stuff done very fucking wrong. You got: Bitch, Ninja bitch, Cunt, Nerdy girl, Self insert moments, anime rip-offs like Ranma and a fight between two characters going Super fucking Sayan and Street Fighter(The fight is shit)and a lot more.

There is a character called Reiko and....

She is the walking, breathing embodiment of sex. Whenever she is around, all she does and talks about is sex, sex jokes and more FUCKING SEX RELATED BULLSHIT.

That fucking character can grind the gears of anyone who has the misfortune and stumbling and reading this comic.

Ok now to the shit.

Drama? Stereotypical American shit with Knock off Wasabe. Plus, whenever something serious is taking place, the author fucks it up with some "comedy." For example, Chrissy, the main Female, learns from her mother about a girl named Amanda, who her generic evil ex Cody, used her to cheat on Chrissy. Her mother informs her that Amanda is living with her Alcoholic mother who regularly beats her. When Chrissy goes to Amanda, they talk for a bit and when Amanda turns her face to Chrissy, Chrissy downright shouted:

I was a moment away from having a Bloodlust and a fucking Aneurysm...

The comedy? It ranges from annoying, obnoxious tits sex jokes to something generic and to Gold. However, the Gold lines that make you chuckle or laugh are a bitch to find, so you are stuck with the generic and annoying jokes.

The adventure? Objectively speaking, there is none.

The action? It ain't good, and that problem can be traced directly to the pacing. It jumps from one set of characters to the other, leaves and skips out action scenes, nearly all the time cuts out whenever there is a rise in action or peak and makes timeskips without any sort of announcement or note.

Here are a couple of examples:

Somewhere around pages 100 to 130~150, the aforementioned evil ex Cody gets into a fight with a guy called Ravin and just when the fight starts it cuts off to Chrissy and her friends. Later, we see this Ravin guy, informing Quick(the Male lead and a definite self insert) that Cody has been dealt with and would never be seen again... Quite literally, we never see him again, there is no redemption arc nor a I AM BACK BITCHES arc. He just vanishes...

The second one(Way before the evil ex appearance) is when Quick is about to get raped(I am not making this up) by the stereotypical nerdy mouse girl named Raven(Bruuh the fuck with the names) but is saved in the last minute when a rando busts the door and sees them in an AHEM "uncomfortable situation." The author then jumps to Chrissy and her friends and moments later, Quick shows up without any indication of facing some sort of consequence. We the readers are only left with questions and no answers as to what happened with that encounter...

Another horrible part about the writing is the starking writing differences between the Male and Female characters, where women would acted like sex fiends of varying degrees of hornyness, stupidity and bullshit, while the men were (and still are, same goes for the Womanji) Mary Sues, who were near-always on the right, always logical and wise, and always acting a little more, AHEM, "normal with hornyness", with few instances of them acting the opposite, like Unwise, with only three, yes, THREE exceptions. Two groups and one individual: The background characters, the side characters and that one generic evil ex. Another particular discovery (which pretty much supports what I said) had been found by Riiser of the Webcomic Relief.

Let me make a small introduction about that man. (Don't worry, this is connected to the review.)

Riiser is a Youtuber that has been reviewing webcomics since his channel's inception in 2010. A decent portion of the webcomics he reviewed have also been reviewed by members of this very Wiki. (For instance, Las Lindas, Concession, TwoKinds (Including its horrible absolutely atrocious rip-off), Bittersweet Candy Bowl, Better Days, U.S. Angel Corps (FUCK NO.) etc.)

Around 2017-2018, he made a three-part review on Rascals, the subject of this article. In the third part, he conducted an experiment, where he read every single voice and/or thought bubble that had three or more words that were:

-Talking about relationships with guys.

-Talking about sex with guys.

-Normal dialogue along with sexual imagery.

-No filler shit, only comic pages.

When the calculations were completed, the results were just mind breaking:

Of the 2379 bubbles, 1290 of them were "Bad bubbles" (Containing one or two of aforementioned content) which is a whopping 54% of the women's dialogue and thoughts.

He set up the same experiment, this time counting the bubbles of the Males and gave out the experiment setup to be conducted by a girl.

The results were also sent with a quote:

After finding out about all the shit, (all the shit that I wrote down, there is more of this insanity that is pointed out by Riiser in his review) I nearly went full Goebbels mode. You read that correctly... I NEARLY WENT FULL JOSEPH FUCKING GOEBBELS.

That SHIT gave me a great excuse to leave out the story and just OUTRIGHT WRITE DOWN all of these issues.

When you find bullshit like that, you can't just walk it off without venting off the rage.

One of our forum members (NolanDaneworth) made a long post about the shitshow of the comic, but I cannot get myself to write down what he said because I am way, WAY too tired of this shit, so here is a link to his post.

There isn't a lot talk about MasterGodai aside from the fact that (if you haven't noticed already) he is a big weeb and he has four dead webcomics 6 feet under his backyard. Those being: Knuckle Up, Chitsu Anddo Asu, Rascals Goyoku, and Project Zero, all of which stopped updating years ago. You also can't read any of these, since Katbox died. Three of the four comics were also hosted on a site called Petite Symphony, which is now dead but the domain is still there and on whatever comic you click on, there is a 50/50 chance of being directed to the comic's site (Which hasn't been updated for God knows how long) or you get directed to the comic's position in the site but doesn't show ANY of the strips.

It is quite surprising that Godai didn't even put some sort of effort in reviving any of that shit.

Noteworthy information about him: 1, He watched WebcomicRelief's review on his webcomic... And did not take it seriously...

2, He created this webcomic in memory of one of his late friends, Tim Marks AKA Jabronisaur...

Let that sink in.

Also, the founders of the site Petite Symphony created a new hosting site called Comics Break... Which is also dead.

This sack of shit is not worth reading at ALL. I wouldn't even recommend it to a masochist for a quick fix of PAIN. It is quite surprising that this very comic flew over our radar for so long. For some better insight in the pathetic excuse of a "story," I would recommend you watch Riiser's three-part review, which also describes the comic's other problems. Other than that, this webcomic rightfully deserves its "three out of ten" rating from Riiser's review and its one-star from this review.

And now, for a few insults, by one of our forum's members, Nolan.