This was a webcomic written by none other than D. C. Simpson, who created the acclaimed Ozy and Millie, and she even bought web advertisements to bring in readers. As might be imagined, I had high hopes for this webcomic, and at the beginning, it looked good.

After the original webcomic stopped, I learned there was a new version, and wondered if it would be better.

(Version 1) There were several "Huh?" moments toward the beginning. However, the story truly becomes a train wreck when Jeff, the little boy owner of Princess (as Raine was initially named) said that he viewed her not as a dog, but a girl covered with fur. Ahem, Princess may be able to read and speak English, but the idea is that she is a pet dog adopted from a kennel. She is not like Millicent Mudd of Ozy and Millie, who is a furry version of a human girl, nor is she supposed to be a figment of the imagination like Hobbes of Calvin and Hobbes. Raine is supposed to be a regular dog with some human capabilities.

(Version 2) Not applicable for a webcomic that stops after only a prologue and one strip.

(Version 1) The story involves Raine, an anthropomorphic blue female dog wearing a long coat, Dame Edna glasses, and a dog collar walking through city streets and telling the reader about her past in numerous flashbacks.

Raine's life starts out like that of a regular dog, adopted as a family pet from a kennel, and given the name of "Princess". Early on, she does exhibit some anthropomorphic characteristics, such as walking on two legs, and somehow learning to read and speak English. Later, she discovers that humans consider dogs to be expendable when she reads about Laika and the Soviet space program, and also that dogs are considered soulless. Evidently the author has never heard of the movie "All Dogs Go To Heaven", nor has she heard of any theological debates over whether nonhuman animals do have souls-and why wouldn't that happen in a world where animals can speak? There are such debates in this world.

But this is where the webcomic jumps the shark: 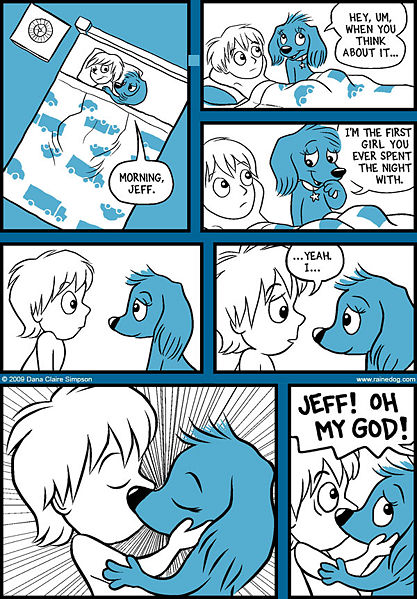 The strip that propelled Raine Dog into infamy.

I did mention this matter to D. C. Simpson on her DeviantArt page (she uses the name "Pedantia"), and she said that the controversy was "stupid". Never mind that it involved a sexual kiss between an underage boy and a puppy: 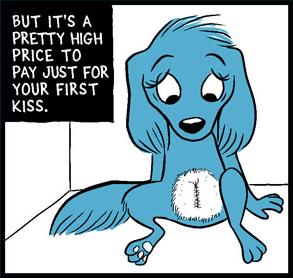 In case anyone mistakenly thought the kiss was meant to be innocent.

And this is where it all falls apart. In real life, pet dogs are neutered to prevent unwanted pregnancies because they are incapable of intelligent family planning, and as a humane alternative to resorting to what had been done in the old days. But if, in the Raine Dog universe, animals have human-level intelligence, why would there be the practice of neutering pets to begin with? As a former male homosexual who later became a MTF transgender, D. C. Simpson seems to be implying that the taboo romance between Jeff and Raine is comparable to either homosexuality, transgenderism, or both. Most homosexuals and transgenders would probably take offence at such a comparison.

The story goes on where Jeff and Raine are still together, but somehow Raine's being spayed has spoiled their relationship. Why? Neutering house pets is commonplace nowadays-and is advocated by none other than the "Mutts" comic strip. Also, based on personal observations, neutering pets does not alter their basic personalities. But the implication is that Raine was "ruined" by having this done.

But there is more. Princess is eventually given to a family relative who is indifferent to her, and she reaches adulthood and escapes. As she travels, she meets other animals, both anthropomorphic and not. (Why are things this way in this scenario? It's never explained.)

Also, in her travels she meets some penned-up (non-anthropomorphic) cattle, and she goes to them and warns them that they will be slaughtered for food unless they flee, and she even opens the gate for them. But the cattle rebuff Raine and refuse to leave their pen; it is their home, after all. The analogy is all-too-obvious: the author is the voice of knowledge and reason, and anyone who doesn't heed her is stupid.

Eventually Raine finds a pack of wild dogs (also non-anthropomorphic) who take her in and command her to hunt. But when she goes after a rabbit (who is not only non-anthropomorphic, but evidently cannot even speak), Raine cannot bring herself to kill it, even to survive. The dog pack realize this and has Raine get food from garbage bins instead. Then the story abruptly halts. 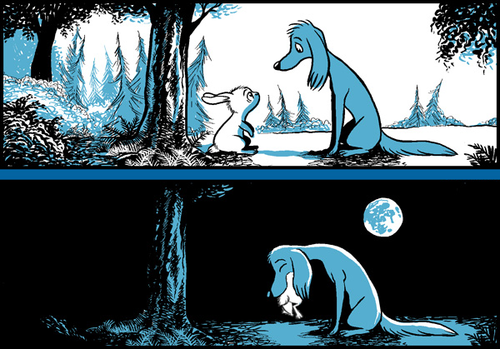 A mockery Photoshop edit done by none other than the fans of Ozy And Millie themselves on the now-defunct Define Cynical fansite.

(Version 2) As mentioned above, the story never had the chance to get started.

(Version 1) The art is akin to the later Ozy and Millie style, toony with a hint of realism, and animated without going overboard. Unlike Ozy and Millie, it is black and white with blue patches, which does suit the arty mood of the webcomic.

Princess and Jeff in the new version.

(Version 1) As the author mentioned, this was meant to be a "what if lower animals had humanlike physical and mental capabilities?" scenario. But too many questions are raised that do not get dealt with. Why are some animals in this webcomic anthropomorphic and others aren't? If dogs and cats can become anthropomorphic, why not cattle or rabbits? What social rules do animals follow in relation to humans, or each other? What are the rules involving food animals?

(Version 2) Presumably the new story was intended to go on a similar path to the old.

Dana Simpson (she no longer uses her former name D. C. Simpson) is best known as the author of the well-regarded furry webcomic Ozy and Millie, which has received much acclaim and numerous awards. Whether this person's becoming a male-to-female transgender has had anything to do with it, Simpson has also produced duds such as the bungled Raine Dog, although humorless, pretentious political comics such as I Drew This prove that even in her Ozy and Millie days she had a penchant for being overblown and unfunny.

But Simpson seems to have gotten back into her groove, finally receiving newspaper syndication with her latest strip Phoebe And Her Unicorn (originally titled Heavenly Nostrils) and that has turned out well enough, so there is hope for her yet.

In her discussion forum (link below), Simpson describes how she decided to use the concept of her friend Thomas Dye's Newshounds webcomic to make a story about a world with humans and animals with human capabilities. But Newshounds never really tried to be too realistic, while Raine Dog did, and Simpson, for a number of reasons, ultimately abandoned the idea and has no intention to continue with it, even though several fans of hers begged her to do so. Hardly surprising when she has already succeeded in achieving her dream of drawing a comic strip which actually appears in newspapers.