This webcomic was mentioned on the BWW on a thread about Pixie Trix webcomics. This is supposed to be a spinoff of the Penny and Aggie webcomic, but whatever the case, it sucks enough to warrant a review here.

The story starts on a college campus. No, unlike in ClosetCoon, people don't discover their homosexuality while there; in fact, title character Sara has already long since known about her own, to the dismay of her mother. Sara's other problems include her goofy roommate Lisa, as well as goofy dorm mates, not to mention the dorm's RA. (I doubt that any RA would get away with doing this.) In any case, Sara and Lisa tour the campus, but Sara is still thinking about getting a girlfriend. And the dorm's RA has dark secrets of his own.

Well, well, our heroes do go to classes, and even discuss them afterward. But Lisa ends up falling in love with...the RA.

It's the new year, and...what exactly is the RA looking at? And guess who notices? But then Lisa gets a call from a former boyfriend inviting her to a sorority rush party, and Lisa invites Sara to come along. They both go, only to discover the sorority is meant for lesbians and is not exactly welcoming to other people, but it doesn't seem to be Sara's cup of tea either. Upon returning to her room, Sara discovers Lisa having an overnight guest, a person named Chrissie. Next morning Sara goes to class while the RA discovers that Lisa was the author of the story he had read. But the RA is evidently visiting to find out about who had visited Lisa the night before, and Chrissie was a trans woman and did not seem to have enjoyed sex with Lisa.

Okay, let's pause right here. The readership is starting to grumble over Lisa's attitude toward having had sex with Chrissie and having made him/her uncomfortable. Yet what happens next? Lisa evidently is indifferent to what she had done to Chrissie. Life simply goes on for her.

But what about Sara? She has a philosophy test to study for, and this is what she goes through. But suddenly we're back on the subject of the lesbian sorority. So are Sara and Leah going to have sex or aren't they? Now we see Lisa again, and she spots Chrissie. Now what? Well, it's back to Sara possibly getting a girlfriend, and then it's Sara and Lisa tasting beer for the first time in their lives.

Let's pause again. Both Lisa and Sara are sexually experienced, Sara is definite about her lesbianism, and yet...they never tasted booze until now? Rather hard to believe when you think about it. But afterward, Lisa gets on Sara's nerves again, and the beer probably had nothing to do with it.

Then Chapter 2 begins with Leah fixing her hair. It turns out that she also has an annoying roommate. She goes out and finds Sara and Lisa and follows them as they converse. Meantime, our old friend the RA reappears, and he admits hating the job and the freshman students he is supposed to support.

The story continues, but I think I've covered enough of it.

Line drawings with basic colors, no shading and little in the way of detailing, proportions and body shapes are okay, but the major beef I have with the artwork is that it is rather stiff and dull, even when it tries to show action and animation. 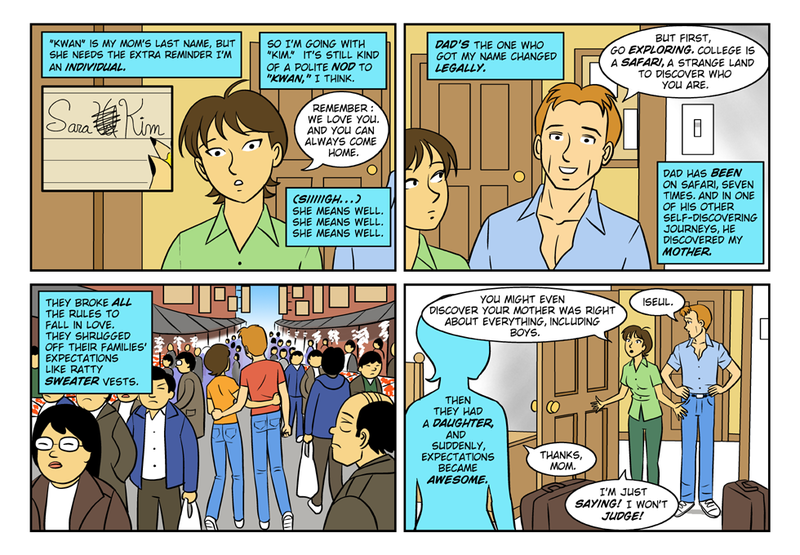 Shockingly mediocre artwork from an illustrator of long fame and experience.

The art wouldn't have been bad if it were the work of an inexperienced amateur. But it isn't. In fact, the artist is none other than Jason Waltrip, a professional comic artist with decades of experience who has drawn art for the Robotech series as well as multiple adult comics, though he has drawn art for other webcomics as well. 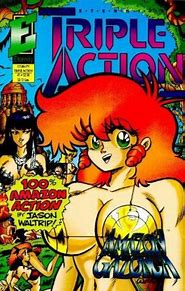 Something better from this artist

Seeing that Jason Waltrip has more talent than his drawings for Quiltbag would indicate, one wonders if he was deliberately holding back on his artistic talents for this webcomic.

Ironically, of all the webcomics I reviewed which were set on college campuses, Quiltbag is probably the closest to reality. People go to classes and worry about grades, nobody has a car (college students who do are usually commuters and not dorm residents), and students' families are not a million miles away.

Unfortunately, this is where the webcomic's virtues end. The RA of this dorm is an asshole who is completely unsuited for his job; how could he have gotten it in the first place? And why would he go and confront Lisa for having an overnight visitor, unless somebody filed a complaint, which the story never indicated? Also, Lisa wrote a gay sex story that takes place in a Nazi concentration camp for others to see...and that would legitimately make any RA (not to mention other people) unhappy, but the story did not indicate that either. (Shockingly enough, there were no complaints about it in the comments section.) Also, there might be gay and lesbian clubs on campus, but I cannot imagine fraternities or sororities existing that only allow homosexual members, which I thought would be illegal.

It should also be noted that the webcomic was written in 2011 to 2012, and is presumably set in that era. Yet the dorm residents make references to celebrities like Madonna and the song "One Night In Bangkok" which were popular in the 1980's. That's like college students in the 1980's making references to Buddy Holly and "Rock Around The Clock".

As for the sexual aspect, I can tell you from personal experience that while there were boyfriends and girlfriends who had sexual relationships, I have never heard of people involved in sex orgies or anyone involved in sexual experimentation. Which did not mean these things did not happen, but it was probably less widespread than the stereotypes suggest. A high school teacher told us that even in the 1960's, a lot of people never became hippies or political activists, but just went to school to get their degree and into a job when they graduated. It was the case with me as well.

The links above should tell you everything already.

Evidently this was supposed to have been a social message webcomic, and each chapter was supposed to start with each letter of the webcomic's title-Chapter One being "Q", Chapter Two being "U", and so on, but the webcomic ceased to continue at the end of the second chapter. The name "Quiltbag" was to indicate every type of sexuality, but the story covered lesbianism, bisexuality, and transgenderism, and then it stopped.

But even though the topic of various sexualities was supposed to be covered in this webcomic...what point was it trying to make? Sara was definitely a lesbian in her mind when the story started, so what was she supposed to do in the story? Find a partner? Question her sexuality? And what about Lisa? She gets a male/female transgender to bed her and this ends up upsetting this person, and Lisa shows no remorse over this fact. What was the point of that? And what purpose was the asshole RA supposed to serve in this story, comic relief? I was expecting Quiltbag to give us some sort of message...but if there were any, I could not for the life of me determine what it was. Evidently the author realized this webcomic was simply a waste of time and decided to drop it. And who could blame him?