Really, the name alone is downfall enough. This most terrible of titulos, this mockery of monikers, "Pronquest", is the kind of name not even the worst, least creative pornographer in the world would use. World of Porncraft at least makes it sound like it has a connection with a fantasy world. Pronquest? Well, I'm sure some fantasy story has the word "quest" in the title, and sounds vaguely similar to this title, but any sort of name like this is pretty much the very epitome of generic. A "quest for pron" sounds like a fourteen-year-old basement dweller's trip down to the gas station to get a Playboy. He could be wearing a wizard's garb for all I care but it doesn't make it any less pathetic. 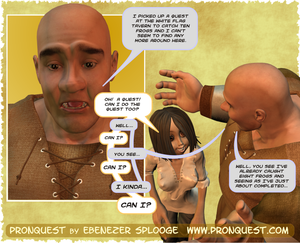 Remember how I said the "heroine" looks like a little girl? I wasn't lying. Well, not really a little girl, more like a forty-year-old man pretending to be a little girl. He calls himself "Libby Belle." Yeah, I don't want to touch the double entendre there with a forty-foot pole. He looks as girly as possible, only with big breasts. And he is definitely a he. Can't forget that little detail.

Click "Next" and you are greeted to our primary male character. He's big, brutish, and obviously the fuckbuddy, probably played by a similar forty-year-old man who digs playing out his little pederasty fetish. And he tells terrible jokes. Oh, this can only get good from here. This is some seriously clever shit he's laying down, am I right guys? Just downright thigh-slappers! I can't wait to hear the zingers he'll make about wayward priests and rabbis later on, I'm sure they'll just be pants-wetting hilarious.

His name is Lombo. His penis is horrifying. Said penis directs him to remove pedogirl's shirt, leading us to begin our critique of this comic's attention to anatomy. As one might expect, not good. I imagine that a wizard could give magical boob jobs in this fantasy world, but I would have to fault him on putting them on a little girl, and more importantly doing such a piss-poor job. I have not before this comic seen tits attached by the armpits like this, nor do I ever want to again.

For someone so obsessed with sex organs, Splooge sure can't draw 'em. Again, if you're going to draw cocks, at least fucking know how to draw them properly, because good lord the dicksnake this sex-happy giant has between his legs is frightening.

This strip is the worst of all I have yet seen in this comic in terms of anatomy. The feet, pants, breasts, eyes, face, arms, spider hands, and hair on our pedogirl are all terrible. Which leaves the bellybutton as the sole feature that's even presentable, and that's faint praise because she looks like her last meal came all too long ago and was far too small. Oh yeah, and her ass also looks completely wrong. I'm pretty sure it's the only thing large enough below her stomach to support her beltless pants.

Later on, a red frog burns their clothes off, and we find more horror. The penis is bad, but for my money the faces this guy draws on his two lead characters is the most nightmarish aspect of this wholly bad comic. The girl's eyes are perpetually sunken, appearing as if they could pop out of her tiny skull any moment, her pupils dilated and appearing drugged at all moments like a cracked-out coke whore, her mouth constantly disfigured into some nightmarish caricature of an expression, and attached to her body it's like looking at an Asian sex slave shipped to her mentally retarded buyer, whose square-jawed, small-toothed and uttery hideous mouth, jutting forehead and empty-headed expressions remind the viewer of the most horrible Deliverance comparisons imaginable.

All the women look awful, though. One particular woman is drawn so badly that you would think it took effort to draw her so badly. How could "Splooge" look at that deformed back and think it looked right? Or her cheeks, or eyes? Or any other part of her anatomy, for that matter?

And then there's the way he draws semen, as here. I heaved looking at this strip, by the way. As well as I did on many, many others.

Aw fuck it, let's move on to the

As by now we're getting into as much plot as this nightmare is capable of mustering, and the girl is called to fuck an elderly farmer who challenges her retarded pedophile owner for the role of most disgusting hideous white trash slime impersonation. Seriously, he is unbelievably sickening in the extreme, and it becomes clear that she has to be drugged constantly or else there is no fucking way that she could ever fuck any living creature that looks like this.

If I could I would stop here, because this comic by this point is turning my stomach into knots. Jesus Christ in Heaven save my soul, the writing in this comic is the last ingredient in what could very well be called the webcomic from Hell. "Now that we've got the rust out, it's time to start laying some pipe." "Schlonk." "Hurry it up then, I gotta walk to town if your friend gets Joe his mojo back". "Hurry up? No problem, but I'm not sure you'll be able to walk afterwards." In case you were willing to give the writer the benefit of the doubt, we can safely tag him as a rapist in addition to being a pedophile, a bad writer, a bad artist, and utterly sickening beyond all reason.

"With Libby, I doubt there's a wrong hole :D"

"I am reading it and loving it, this comic kicks major ass!"

And yes, those are the fans. Like any truly sickening comic, this one has a small but utterly committed fanbase that consists of some of the creepiest creatures the human mind can comprehend. I can only see them as rapists and pedophiles. I cannot imagine them as any less. Even if they don't now, they will at some point or other wind up raping or molesting somebody. It's inevitable. This isn't just kinky or different, it's childlike girls getting fucked by seventy-five year old farmers. It's giants breaking womens' legs with their gigantic cocks. We're talking Marquis de Sade territory in this fairly-new comic.

It's so predictable it's boring. The only places where it gets interesting is when the comic becomes so sickening and fucked up that you can't look away, like a pornographic car crash. Rape scenes galore, for example, as well as genitals that can talk. And of course naked fight scenes between men and the frog character are always case studies in abject stupidity of the kind only a person with this kind of creative deficit would concoct.

He is a dark priest of Satan. See below.

This comic is disturbing on a fundamental level that any normal human being should be able to understand. And yet webcomics fans love it. I'm talking straight-up adore the kind of nightmares that this comic uses and throws out for even more horrific nightmares. How much do webcomics people love this webcomic? Well, it's number 88 on the "Top Webcomics" list. It's number four on the WebcomicZ list. It's ranked five-out-of-five stars on the website topqualityhentai.com.

Oh what am I saying, we live in a society that made Transformers II: Revenge of the Fallen the top box-office hit for 2009. So eat it up, you sickening perverts.

Here is the society the mindless masses have made, thrown on a fucking platter for critics to try to sample, with tearing, glistening eyes crying to the masses "please no more, I cannot take any more of this sickening garbage." And the masses eat it, and they beg for more, as the critic's beating heart is ripped from his chest and sacrificed to the Bad Webcomics Satan below, and the demons cry out for more blood, more mindless fucking and perversion, and the high bad webcomics priest Ebeneezer Splooge raises his hands to the sky in this black mass of his creation, and he calls, "So the Evil One says it can be done."

And it is done, for years and years more, as the great comic artists of the past, Schultz and Herriman and Watterson, are called up to his altar, and their hands are branded with the label of the comic and its evil and perversion, and their hands are called up. And the fans, the demons below cry, "more, more"; and so their intestines are ripped from their stomachs. And the demons are not satiated.

And thus are the great cartoonists, Disney and Avery and Hannah and Barbera and Bluth, put upon his table; and their hands are too branded and cut off, and their intestines ripped out, and their eyes gouged free of their skulls; and the demons are not satiated.

And so finally the great webcomic artists of our age, Siddell and even Krahulik and Holkins, Tracy Butler, and many others so talented, are lined up; and they tell Siddell, "Draw Annie and Kat making out." And thus by their power it is done. And he is branded, and his hands cut off, and he is thrown into the fire. And they tell Krahulik and Holkins, "Draw Tycho and Gabe 69ing while Tycho's niece licks at her uncle's asshole." And by their horrible power it is done. And they are branded, and their hands cut off, and they are thrown into the fire. And they tell Butler, "Do a three-way with Mitzi, Rocky and Freckle, while Mitzi fingers Viktor's eye socket." And by their power, as she cries out to God above for heavenly mercy, it is done, and she is thrown in the pit with the rest of them.

And as they writhe, this black priest calls down after them, and he says: You who see yourself so highly, you could not beat me on the WebcomicsZ list, could you? You are so lacking in what really matters: Hits and fanbase." And Holkins and Butler and Disney and Bluth and Watterson and Herriman and all the rest are all burned to ashes.

If you support this comic, I think it is safe to say you are in league with Satan.

This is not a comic you want links to.