Can this material ever go up?

The story starts off with a near-naked black woman (who turns out to be a queen) being found by a demon who grabs her and rapes her (in graphic detail, so I'm not linking to that), but she calls upon her magic powers to stop him and take control of him. The queen escorts him to an outpost and brings him inside, where he finds himself surrounded by female admirers, much to his dismay. The queen is also dismayed when she goes to a high priest to explain what had happened, and the priest tells her that she cannot have sex with anyone anymore because whoever has sex with her would be devoured by the spawn the demon had implanted into her. But the demon suffers too, being put into a cage in which he can only stand, and is given dog food for his sustenance, much to his humiliation.

Next issue (author's term): The comic has a "furry" sequence where Spritzer, a wolf character, goes to visit the castle of the fox character queen, who is busy having sex with a number of male foxes. Finally she stops to hear out Spritzer, who tells her of a potential war situation in the neighboring kingdoms and how she could take advantage of it. The queen summons Commander Sheananna, another vixen, to go spy on the neighboring kingdom. During the earlier orgy, however, the soldier who had been having sex with the queen mentioned the taboo word "love" to her, and he is sent to be punished by being put into stocks and subject to public sexual torment. Sheananna comes by and adds to his torment before she has him released, and makes him accompany her on her spy mission.

Next comes a pirate-themed arc, starting with a parrot with a human penis(!) warning his queen about an attack by ninjas. The queen defeats them, but the reason they have been attacking her in the first place was due to the treachery of her sister, and the queen calls a conference of ship captains to deal with this situation. One captain named Slagbeard suggests hiring an assassin named "Boudin Mousse" (an anthropomorphic mouse character) and summons him by magic. The mouse agrees and gets himself hired aboard a ship with the idea of eventually reaching his destination. First, the ship stops to have the crew go to an island for treasure, and...

This story arc abruptly comes to a stop, and then the strip itself has a few unrelated joke pictures.

UPDATE: Nothing new in nearly two years. I think it's safe to say there will be no update now or ever.

I shall begin this part by posting an excerpt from the "Art Review" section of Nikki Sprite:

I've seen this type of artwork before, but I had no description for it. I asked Oddguy about it, and he told me this: 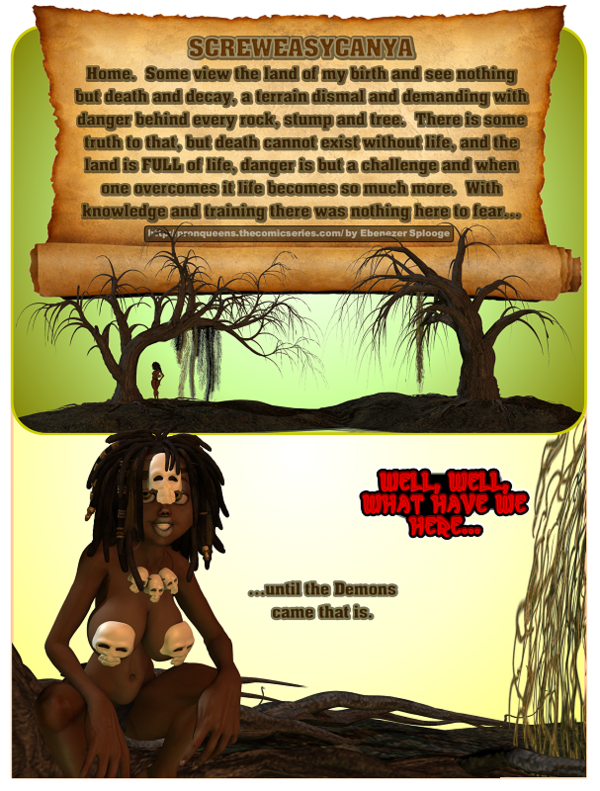 Ugly enough for you?

The art in Nikki Sprite was meant to be titillating; the nudity and genitals in this webcomic are grotesque and not meant to be arousing-or maybe it is to a certain type of audience. Of note is the fact that most of the male characters, whether demon, human, anthropomorphic animal, or anyone else, are shown with their penises out in the open all the time, whether in a sexual situation or not, and even when they wear other clothes. Worse yet, they are invariably human-like circumcised penises, even on creatures such as a parrot. Holy Kit n' Kay Boodle! What the author's point was in doing this I have no idea. Even the gay-themed ClosetCoon didn't go to that extent with the male hardware!

Okay, in all honesty, Pron Queens makes no pretense of being serious, and the writing is loaded with throwaway jokes to prove it. When the queen of the initial story escorts the captive demon, he keeps pleading, "Are we there yet?" and the people at the outpost make references to cable television, The Walking Dead, and killing Kenny, plus a scene is taken from Monty Python And The Holy Grail, and the high priest talks like Yoda, and the second story has jokes about characters named "Asstrid" and "Juggula" and places like "Hamerica" and "Whormandy" and "Tittany", and the rest of the webcomic has much the same type of humor. If this webcomic didn't have such hideous art and grotesque sexuality, it might have made a decent comedy.

The first thing someone might say in defense of a webcomic like this is that it's a parody. Fine, I'll grant you that. But I still have mixed feelings about accepting that excuse.

So the art is deliberately ugly and grotesque to parody the adult fantasy genre, and the stories are chock-full of pop culture references and jokes, some of which manage to be mildly funny. But even parody has to be good. You can't excuse yourself from any and all standards of quality by saying something is satire.

Of course, one might say that this is supposed to be a deliberately bad "troll comic" and is overdoing everything on purpose as part of the joke. But there is a difference between "so bad it's good" and "so bad it's bad". As I mentioned, the art is grotesque and ugly. Not comically ugly, but ugly ugly. And some sexual jokes are funny, but not one after another after another. Like in the movie The Blues Brothers, is it funnier to have twenty police cars crash into twenty police cars (quoted from the late critic Roger Ebert)? A gazillion throwaway jokes do not substitute for good humorous writing.

What can I say? The art is ugly and grotesque, the jokes are overdone and few are funny, the sexuality is repulsive rather than exciting. The first story arc had a nice ironic ending, but the others made little sense. And like I said, why do many male characters have exposed penises even in nonsexual situations, since this webcomic is definitely intended for the heterosexual set? I cannot even imagine who the author's intended audience is supposed to be.

I don't think you want to see any of his other works either.