Press Start To Play was in the to-be-reviewed section of the BWW forum. Easy to see why.

Well, in the middle of the webcomic's run, the protagonists get married while drunk and their wives appear in the strip afterward, but no actual story beyond that. This is a gag-a-day strip.

Undoubtedly drawn on a tablet, judging from its appearance. Blocks and blobs of color with black outlining and some shading, though none on the faces. (Why do so many webcomic artists fail to realize this flaw?) Backgrounds are either digitized or using pictures from the internet. Some strips, where applicable, have a wildly exaggerated and distorted animated look akin to The Ren & Stimpy Show. Unlike Ren & Stimpy, however, a frequent occurrence here is that mouths and other features are sometimes bigger than the faces, and the drawings are not adjusted to compensate for this fact. 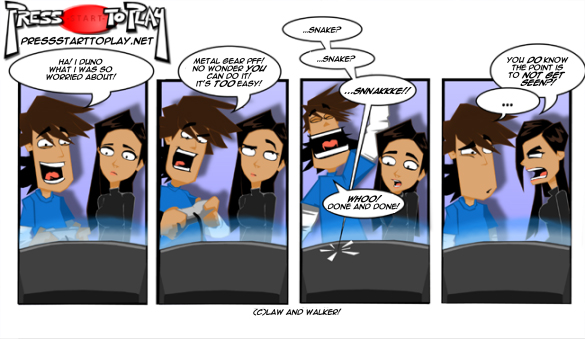 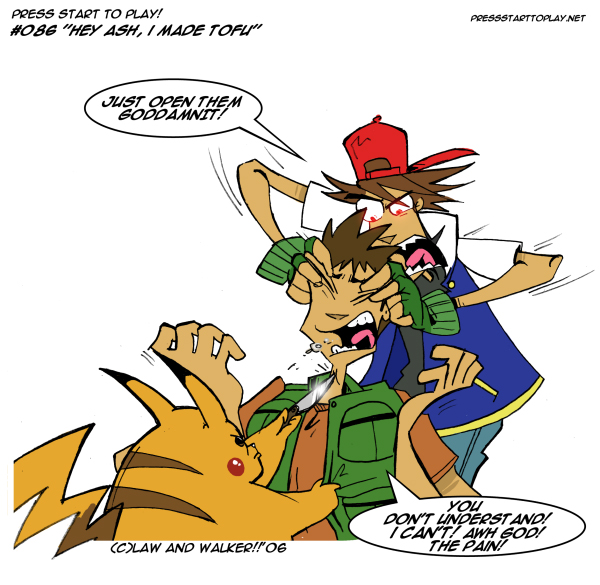 This webcomic covers the subject of video games, the people who sell them, and the people who play them. The protagonists are two young men, presumably roommates, named after the authors, and in the middle of the webcomic's run, Adam and Darryl get drunk at a Las Vegas convention and end up getting married (to two different women, silly). Another protagonist is Simon the Parrot, Adam's obnoxious pet.

So what actually goes on in the webcomic? Jokes about games such as Super Mario Brothers, Mario Kart, Pokemon, StarFox, and others. Also targeted is the video game industry, as well as those who purchase and play their games. Simon the Parrot also serves to cause all sorts of grief.

But not every strip is about video games. There are several cartoons about television and movies, the protagonists and their spouses, and just plain random jokes. (Why is Darryl addressed as "Snake" in some strips? Don't ask, it's never explained.)

Good comic potential, right? Except there's not a single good joke in this whole webcomic! There are corny ones, predictable ones, ones that lack good punchlines, and many that simply make no sense at all. Not a one of them, though, has managed to evoke even a mild chuckle from yours truly.

Nothing besides the links already provided.

The only redeeming feature about this webcomic is that it only lasted for a year and a half. Evidently the authors realized they had a turkey on their hands-and when they tried adding one more strip years later, they saw that it was no better. Video games and the video game industry are a good potential source of humor, even if it is for a limited audience. But the authors proved poor at artwork and worse at comedy, and made a webcomic that appeals to no audience at all.