I happened upon this webcomic a while ago while browsing Portal of Evil, and I'm honestly surprised that I didn't spot it on DeviantArt first. With over seventeen MILLION views, Bleedman is a bit of a legend on that site. This daunting number (and really, that's all it is: a number) will not save him from me and all the others who think this webcomic is crap. It's a well-polished turd to be certain, but look past that brown sheen and you'll still spot the moist shit underneath. 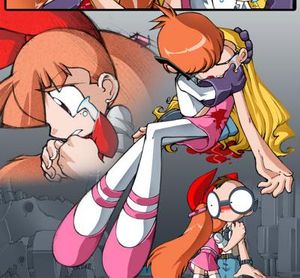 I could say that this webcomic has always been pretty awful, but crossover comics are nothing particularly new. A typical crossover comic makes a few appearances, then fades away into the ether once the author finds something more productive to do, like contemplating his navel, or deciding that they need to write a comic with original content.

But Bleedman is not your typical webcomic hack. No, he takes a bad idea and runs with it. He takes a bad idea and makes it into an epic. It's one thing to make a crossover where the characters get together to fight, or screw, or meet the Flintstones. It's a whole other can of worms when you try making your crossover into a coherent plot with many overarching elements. Bleedman's biggest mistake is when he takes these characters from the typical "monster battle a week", into something that requires actual forethought, like introducing original characters and villains. Oh, and a dramatic and very ham-handed subplot involving Dexter's Laboratory characters.

Things go downhill when Bleedman introduces his own villains, but the whole comic flies from "mediocre" to "God-awful" the moment Bleedman introduces Dexter's dying sister. Actually, Dexter's android remake of his dead sister. Way to go from ham-handed plot to creepy shit in one page, Bleedman. Truly you are a master of timing.

While the art is enough to keep the comic popular, don't bother reading into the plot too much. Some may consider this to be a pretty comic (I don't), but no matter your opinion on the art, it is far from a smart comic, or even an intelligible comic for that matter. If you insist on getting the full Bleedman "experience", you are better off skimming. Be like the fans and try not to think too hard about what is happening in front of you.

From what I can gather, the story begins with the Powerpuff Girls moving to Megaville. Why? Because Townsville sucks and it's time for them to move on. No explanation given aside from that. Apparently, Megaville contains every cartoon character from cable television and then some. The PPG girls meet new people, fight, and then go back to making friends.

Then Bleedman decides it's time for some serious plot, and that's when the "fun" begins. The evil Dark Star counsel is introduced. The Dark Star council consists of villains from across the Nickelodeon and Cartoon Network roster. Which ones you ask? ALL OF THEM. Things don't just stop there, though. It's discovered that Dexter's sister DeeDee was killed by Mandark during a foiled attempt by Mandark to take over Dexter's lab. Now Dexter wants to revive his sister as an android. Shit is fucking coo-coo banaynays.

Dexter develops a crush on Blossom. She's captured by the Dark Star Counsel and held captive by Mandark. Dexter and Mandark fight it out while spitting out reams upon reams of dialogue. Blossom dies, but is then saved by DeeDee as a fallen angel. Mandark flips the shit and dies in an explosion. Talking happens, and the arc ends with Mandark's sister appearing, and we can only assume she'll be back to avenge her brother.

With that, another set of characters is introduced. Most of them die, then we go back to RANDOM MONSTER BATTLE!! What. A. Slog. That isn't the end of it, but it's pretty close. This isn't an enjoyable read. It's a shoddy tale tied together only through cameo after cameo after cameo. The characters aren't interesting, and the story lumbers on without taking anyone in. Apparently, there is an overarching plot, but it's tied together so flimsily that I have trouble trying to figure out what it is. Like many of Bleedman's favorite shows, the plot seems to be comprised of small chunks, incapable of being pieced together.

This art is almost forgiveable.

Bleedman's art is the one thing that I can almost forgive. It's the one thing that has made his comic as successful as it is, but it still suffers from many issues. While his art has definitely improved since the inception of the comic, many of the major flaws still remain. I'll start from his first comics, then shoot over to his most recent uploads.

Early in the PPG: Doujinshi run, Bleedman seems to have difficulty with profiles. Check out these jawlines man. That's far from his greatest sin, however. In his early work, Bleedman abused the shit out of Photoshop filters (nice filter ground there, champ), and relies on cheap 3D renderings for the buildings. At one point, Bleedman experiments with coloring through his sketch work, but it looks like someone smeared graphite over the page, and all-in-all looks like a failed attempt by Bleedman to expedite his comic-making process.

Things eventually do improve, but with every mistake that Bleedman fixes, a new one is introduced. In the middle of the comic, the characters suddenly have GIANT GODDAMN FEET. Like, we're talking about elephantiasis feet. The panel layouts are also atrocious, and they don't really improve throughout the course of the comic. Often, Bleedman tries to insert too many characters into a single page, or he doesn't separate panels where he really needs to, making it look like two images are a part of the same panel. All this confuses the eye of the reader, and frequently teeters on the edge between "layout" and a single illustration.

However, Bleedman's greatest sin by far is what makes the comic its biggest success. His EXTREME renditions of all your favorite childhood characters. Bleedman has a poor grasp at cartooning at best. He derives most of his inspiration from Spawn or Japanese pedo comics, and it's really damn obvious. The men are bloated muscle heads with ridiculous shoulders, while the girls have skinny bodies with long legs and short skirts. There is rarely any variation between these body types, and it seems like one giant palate swap of character designs. Whatever charm the original characters had are sucked out, all for the sake of being EXTREME. You may think this is a fine idea, and there is nothing terribly wrong with EXTREME renditions, but then again, you probably thought Loonatics was a good idea. These characters were given their designs for a reason, and pumping them up with illustrated steroids isn't going to make them look any better. 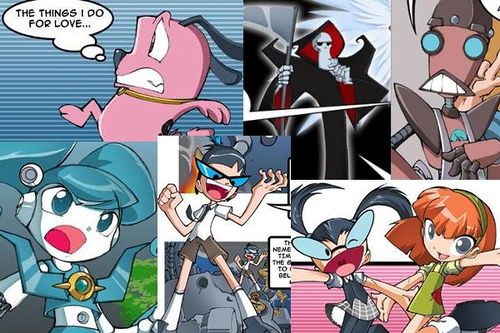 If you grew up in the late 90s or early 2000s, you might recognize some of these characters.

Writing is where Bleedman's comic completely falls apart. It's utterly and unforgivably atrocious. I've covered most of the broken story elements in the "plot" section, but when it comes to Bleedman's poor writing, the list just goes on and on and on.

Bleedman can't write an original character, and it's completely obvious by the number of "borrowed" characters in his comic. He wants to tell "his" story, but is so wrapped up in the ideas of other people that he can't come up with his own content. Instead, he takes the back stories of shows he has watched through the years, tears them apart, and inserts his own convoluted tale. The result is far from pretty. Dexter is probably the best example of this mess. Bleedman has taken an otherwise positive but snarky character, and turned him into an emo anti-hero that is only related to the original character through his looks and backstory, but just barely.

His story is a stitched-together mess of plot elements that Bleedman picked up along the way. I can't find a scratch of non-derivative plot among this entire mess. Bleedman is king fanboy, and he plays it up to all of the other fans. People who read his comics are not there for the story, and this has been made clear time and time again on his DeviantArt page. Again, people are interested in the EXTREME renditions of all these familiar characters. They are too impatient to pick up and read something with new content, but these are characters they already know. Bleedman's comics are easy to digest for the young fanboy and fangirl set. Even with the dark story crammed in there, there is nothing in these stories that's accessible to adults. Well, adults with taste anyway. At this rate, Bleedman will always be pandering to the lowest common denominator.

Bleedman is in his forties, and about 35 years too old to be doing this sort of thing. He's also a known pedophile (NSFW Encyclopedia Dramatica image, CLICK IF YOU DARE), and likes little girls far too much for his own good. His comics frequently feature inappropriate panty shots and creepy incestuous undertones. The dude isn't particularly friendly either, and has lashed out at those who mocked his infamous Grim and Evil 9/11 comic. It's also suspected that he "acquired" a few characters from some unsuspecting artists on DeviantART, but I don't think I could cover that without going too far off topic.

It wasn't easy writing this article. Bleedman's stuff is bad, but not the kind of bad that you can easily grasp. No, if you want to get to the heart of this badness, you have to entrench yourself in it. The Powerpuff Girls Doujinshi is just the beginning of the disaster. Bleedman is producing two other comics in tandem, and each are considerably worse. While the art is passable, sometimes bordering on professional, it is continuously bogged down by the awful story. There is nothing worth telling that can't be told better in other stories, most of which have better art and original character designs to boot. Reading Bleedman's comics is a disservice to the sequential medium, and to yourself.