This webcomic was brought up on our forum. Long ago I reviewed a roughly similar webcomic called Darren And Jason, but that was a furry webcomic and clearly fictional. This webcomic is about the female author claiming she is in a polyamorous relationship-but it is clear from reading this webcomic that this is not the case at all.

When it becomes apparent that the author proved to be dishonest about being in any "polyamorous" relationship. as described below.

The author explains her household, how she has a boyfriend with his own boyfriend, how the author formed this relationship to begin with, and links to other websites that deal with polyamory. Then the author admits to her boyfriend she would not like his having a second girlfriend, unless she herself would have access to her, and the author recalls how she met her boyfriend, and admits she is terrible at meeting people, and suggests having her boyfriend's boyfriend help out, but he says no.

At this point, I am getting the impression that this is no real polyamorous relationship so much as the author is living with two guys who tolerate her. But to continue:

The author describes having seen at age 13 a "moving castle" exhibit and questions her sexuality. Then she and a childhood female friend see Annie Lennox and both decide they are bisexual. Then when the author starts dating H-P (her boyfriend), he turns out to be someone who can fix everything, and that turns out to be an annoyance. The author herself tries her hand at expressing her feelings to her boyfriend. The author and H-P visit her parents, and then she and her two housemates talk about marriage, but who marries who? Then she and Paju (the other man) give advice to H-P. There is a problem with too many plants in their house, and the author's parents visit and bring more plants. The author then describes (sarcastically we assume) how she makes her art. Then her boyfriend talks about copying her face. Then the author talks about sapphic comics and the facts that she wants a female paramour but has none.

Let's pause again. If the author wants a female paramour, why is she failing so badly at getting one?

The author's artwork consists of somewhat realistic line drawings with blotches of a variety of colors, or sometimes even fully colored, albeit with deliberately unrealistic pastel colors: 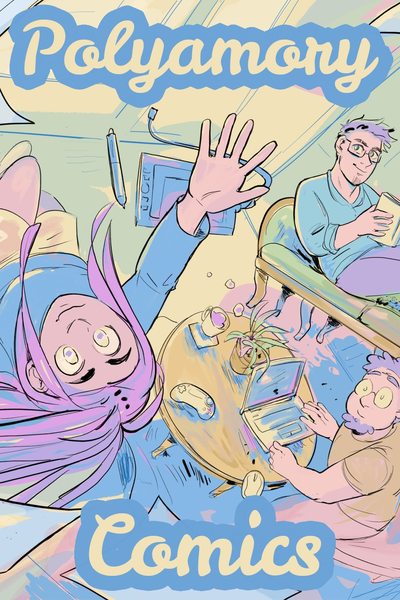 The one image I was able to save from the website.

This color scheme is obviously purposely chosen because this is supposed to be "artsy". Sometimes there are exaggerated expressions to make a point.

The author starts out by defining with "polyamory" is, and what it isn't. She describes random bits about her life, including her biography and what happens with her family and the men she lives with.

Since this entire webcomic is about the author herself, a separate biography section is hardly needed.

The title of this webcomic is a lie. The female author claims to be in a polyamorous relationship with two men, but it is obvious to anybody that this is not the case. The two men may love each other, though the author does not make that clear. What is definite is that there is no affection between her and her boyfriend's boyfriend and she probably doesn't even really love her supposed boyfriend and is living with them not out of love or friendship but because she cannot find her own special someone. Also definite is the fact that she is telling the world she is a big phony and doesn't even admit it to herself. How sad.

(I'd feel a lot better if she were to suddenly say that she had been making the whole thing up.)