Political Comics: A Guideline on How to Review Them

Political Cartoons have existed since the printed newspaper, so inevitably, online versions of them are bound to exist. As such, every once in a while a political comic will come our way that will be suggested for review.

However, this presents a bit of a problem. It's easy to review a comic that's intended for entertainment. But for a comic that's meant to put forward a political statement, things can get murky. This site should not be used to review political opinions in and of themselves, only to review whether or not a particular comic fails as an artform.

Below are a few general tips you should consider to avoid getting yourself caught up in a political debate when you should be focusing your critique elsewhere. If you're reviewing a political comic based on shitty art, confusing plots, or terribly written characters, then review it like a normal comic and carry on. These are not hard and fast rules; exercise your own judgement on a case-by-case basis. This is simply a guide to promote better quality reviews and to avoid turning your own review into an equally obnoxious political diatribe.

Step One: Recognize your own biases

This is a fairly straightforward step, but knowing what your own political position is will make you conscious of where you might stray into debating rather than reviewing. This is not to say you shouldn't review comics of opposing views, just be aware of it and ask yourself if you would have written anything differently if your political position had been something else.

Step Two: Don't mix up bad writing with things you disagree with

Here we have to consider what's in the legitimate domain of webcomic review when it comes to political comics. One way a webcomic can fail is in whether or not it meets its intended goals. I'll give you an example: Single Asian Female is a webcomic that's about Asian Americans, with the purported intent "to facilitate discussion and raise awareness about historical and contemporary issues in the Asian American community." But the comic does very little of that discussion and instead seems to primarily focus on talking about how awful white people are and how Asians shouldn't mix with them; therefore, because the comic fails in its stated goals, that is worthy of criticism. There are also political comics that purport to be funny but fail to make you laugh; admittedly this is more subjective, but that hasn't stopped us from reviewing non-political comedy webcomics, so exercise your own judgement. 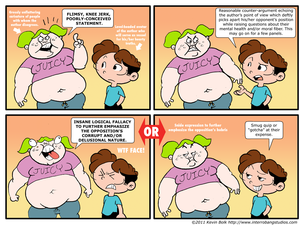 An example of a strawman comic

Another thing to look out for is frame. This is a bit of a difficult concept to explain, but the idea is that a situation as presented in a comic can be interpreted in two entirely different ways depending on how it's framed. For example, a person getting violently assaulted is normally viewed as a horrific thing; but in a comedic strip, where the effects are at worst temporary and unpleasant, the situation instead becomes slapstick. This rule was used by Chuck Jones in his Road Runner cartoons, where Wile E. Coyote was more humiliated than seriously harmed despite falling off cliffs and getting run over by trucks, thereby making it funny. In the case of a political comic, frame is very important in understanding how an event is meant to be interpreted. If, for example, the hero beats up an innocent bystander for a difference of opinion, and it's clear from other characters' reactions that this is unacceptable, then we know that the hero is a flawed protagonist who either needs to atone for their actions or risk becoming a villain. This is a good way to write a morally complex story. However, if the same situation occurs and the protagonist suffers no ill effects, then it becomes clear that the author condones said behavior, and by extension the audience is meant to condone it as well. And if they don't, then their writing is in serious need of improvement, since that is the obvious interpretation.

There are a few tools in the hack writer's toolkit that are used more often than others, which you may want to look out for. These are related to fallacies, so you may want to spend some time reading up on them. Make sure, though, that you understand them correctly. A popular fallacy is the political strawman: The writer misrepresents their political opposition with a bombastic or stupid argument, making it easy for them to dismantle. More often than not, this strawman is meant to represent an entire demographic rather than a particular individual. You should consider whether or not this applies in the webcomic, as it's possible that the stupidity is only meant for this particular character, and not for any person who holds those views. If the character's sole purpose is to be proven wrong, then it's likely that they are a strawman. Pretty much the only exception is if someone is quoting another person verbatim. Paraphrasing makes it too easy to manipulate context or meaning.

Sometimes though the problem is that the author is just too inarticulate. Politics is a very nuanced and complicated subject, and all too often there are people who are really passionate about ideas that they simply haven't thought too much about. This can result in the author dancing forever around a subject without getting close to an actual, coherent point. Even if you generally agree with the author, you may be left wondering what the hell they're trying to communicate.

I know I said earlier that humor is subjective, yet we still review it. One thing that's subjective that you shouldn't really tackle, though, is other people's opinions. Therefore, it's important to recognize what is someone's opinion, and what is an objective claim. Because if the writer makes an objective claim, and that claim is wrong (as in, you can prove it wrong with credible evidence from a nonpartisan source), you are permitted to point that out. If, for example, a militant vegan writes a strip along the lines of "calves are murdered so that farmers can keep the cow's milk," all you need to do is present evidence that this is not the case. In this way you're showing that the person in question genuinely doesn't know what they're talking about, instead of simply having "wrong opinions." You'll want to avoid getting too involved in minutia, though, as nobody is correct about all of the facts all of the time. You'll just want to stick to the most obvious and most blatant stuff.

However, the problem might not be the opinion itself, but how its presented. Specifically, a creator may be arrogant enough to believe that their opinions are facts, and elevate them to a level of unwarranted self-importance. This aspect of political opinion is fair to criticize. For more information, read this article.

Perhaps the only occasion you may want to criticize the author's opinions in and of themselves is if they are clearly out of touch with reality. I don't necessarily mean they may have some out-there stances on particular policies, I mean flat-earth-society anti-vaxxer holocaust-denier levels of batshit crazy. These kinds of things don't require your part in disproving them; many other and better qualified people have already done so. Pointing out these beliefs are sufficient on their own to discredit the author.