For those who aren't into Pokémon, here's a quick primer. The Pokémon cartoon show follows the adventures of 10-year-old Ash Ketchum and his friends Misty and Brock. Ash's favorite Pokémon is a little yellow mouse named Pikachu that has electricity-based powers. Episodes of Pokémon usually involve Ash meeting new Pokémon, helping them out of some problem, then ordering Pikachu to electrocute the main villains, a couple of incompetent humans and a talking cat named Meowth. That's pretty much it. PikaSemeChu is filled with subtly terrible things that only a long-time Pokémon (i.e., me) fan would be mad at, but you should be able to figure out why the comic is bad. 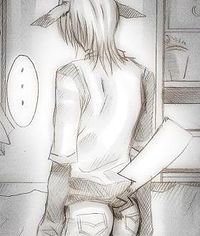 PikaSemeChu starts its epic journey of faggotry by removing one third of the human protagonist. There's no explanation for why Brock has abandoned these unsupervised 10-year-olds in the monster infested wilderness, but it's obvious that Yassa just doesn't find him attractive enough (or gay enough) to bother thinking about. Is it so hard to add in a single line to explain his disappearance? Seriously, just say he has an errand to run, or a woman to molest, or shit, say he 'went to college' or something. Even the writers of Blue's Clues felt that their audience was smart enough to need an explanation for major cast changes! Considering that Brock has a pretty good fanbase amongst Pokémon fangirls, I think Yassa needs to consider her audience more when she barfs this stuff out.

Now, here's the kicker: after finding out about the Horny Pokémon, Ash seeks it out in hopes of turning his Pikachu into a hot female sex slave. The Pokémon cartoon first aired in America in 1998, and yet PikaSemeChu began in 2007. Now, do you REALLY think that in nine years, the series would NEVER have mentioned the gender of its main mascot? Actually, in the English dub it has been said outright that Pikachu is male. There is absolutely no way that Ash would have made that mistake. Even if he had, the boy is ten years old. And yes, Pokémon is one of those shows where the characters never age. It takes a very special type of ten-year-old to think that turning a pet mouse into a sex slave is a good idea. The protagonist of a children's cartoon is not that type of boy. Yassa tries to claim that Ash is now seventeen, but come the fuck on. He is tiny.

And somewhere in this mess of aimless 'character development' Ash gets attacked by a dick. For some reason.

Later on, the villainous kitty-cats find a way to turn back into Pokémon. This prospect is treated as a horrible idea. After all, after one day in the form of a weak pink rape-hungry monkey, why would anyone want to go back to being a fierce super-powered fighting beast? As this is happening, Misty confesses her love for her bike Ash, which is a revelation so shocking that it makes peoples' eyes fall out. Infuriated that he can't have her all to his lusty self, Psyduck smacks her upside her bitch face. PikaSemeChu embraces abuse of all kinds. 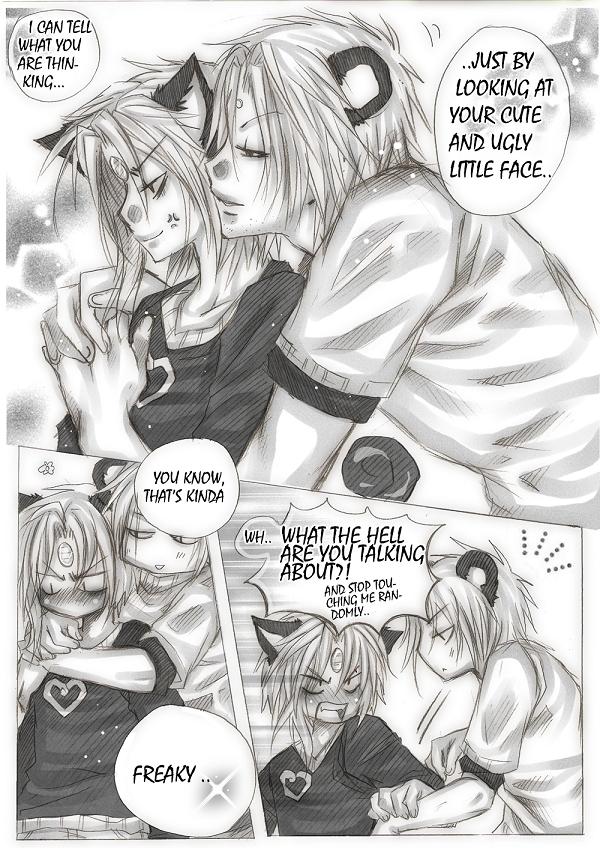 Don't tell me you've forgotten everything that happened before in this webcomic!

This comic sucked when she got rid of Brock before the creator even thought of it. Yassa isn't the first to replace Brock with some shitty bullshit character pair up Ash with Pikachu, nor will she be the last, and this idea will never, ever work.

All I can find about Yassa is a SmackJeeves profile, linked at the top of the page. She's 20, out of high school, and doesn't give her real name. I get the impression that she's a pretty typical teenage yaoi fan. Basically, if you've ever met an excessively bubbly DeviantArt member who describes anime characters as 'teh smex,' you've met Yassa. I have to wonder, however, why a 19 year old would write a comic about raping 10-year-olds, but pretend that they're 17. That's...that's still statutory, guys. I know this comic has been running for like three years and she was presumably 17 when she started it, but she's still doing it. This is just going to get creepier and creepier. And no Yassa, aging up the characters doesn't count if no time passes in the actual plot. 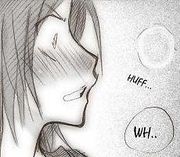 I get the feeling that Yassa learned to draw by tracing CLAMP manga instead of taking notes in class. There is no anatomy in this comic. Everyone has freakishly long limbs and torsos, limp, wispy, nondescript hair, no chin, and lopsided heads that swivel 180 degrees on thick meaty necks. It takes far too much concentration to figure out who's who in this fucking comic. Ash is a boy with dark spiky hair that sticks out at the sides. Misty is a girl with bright red hair in a side ponytail. How the FUCK did Yassa turn them into identical twins? The transformed Pokémon add to the confusion by looking the same as everyone else, but taller (the beautiful Adonis that is Voltorb excluded). Look at this page and try to figure out which character is which. The only visual cues you get are very arbitrary; one of them has a ponytail, one of them has furry ears, etc. Unfortunately, Yassa is a fan of closeups (which usually result in creepy wide-eyed, big-lipped fish faces), so these little clues are frequently cropped out. Her understanding of animal anatomy is no better. I can see why she'd turn all the Pokémon into humans, since her attempt at drawing a cat created a beefy kangaroo-monkey.

Yassa's terrible drawing skills are complimented by her terrible layout skills. According to her, dedicating half a page to a cheap explosion effect is an acceptable form of storytelling. Notice that the other half of that page is dominated by pencil smudges and screentone. Yassa LOVES screentone. There are so many indistinguishable shades of grey in this comic that every page becomes a box of mud. Color would have made this comic easier to read, but would only serve to distract you from the terrible drawing and layout.

The overall effect is boring. PikaSemeChu seems to be about a single character who spontaneously grows furry ears or pigtails, as he/she/it wades through a murky sea of grayscale. There's nothing visually interesting here. Even when something 'interesting' is happening, the panels are either so muddy or so poorly composed that you can't even tell what's going on. On the rare occasion that you can decipher this pile of gray shit, you'll probably be horrified by the lanky stick-bodies contorting around in what is supposed to be 'kawaii' and 'arousing.' You know, if you're not ALREADY horrified by the tall muscular Pokémon attempting to rape a 10-year-old boy.

If you're a fan of Pokémon, this comic is extra infuriating. Yassa has written out Brock, Jesse, and James, made Psyduck into the voice of reason, made Meowth fall in love with "Pikachu-san", and given Giovanni's Persian a speaking role, among other things. She basically does not give a shit. I actually question whether or not she actually likes Pokémon. This comic suggests that she really just likes the idea of ten-year-old boys getting raped by mouse furries.

After becoming human, Pikachu immediately takes every opportunity to try and rape his beloved trainer. Understandably pissed, Ash locks the damn thing into a room all day where it learns English from the most bewildering thing you will ever read. Seriously, I have no words for that piece of bullshit. When Ash comes home (in the show, the characters are perpetually traveling, where is he coming home to?!) Pikachu starts talking about sex and attempting to kiss him. Ash flips the fuck out (as he should), and Pikachu...sulks about how his trainer doesn't 'love' him anymore. And he keeps sulking. Apparently being a crazy pedo rapist isn't disgusting or hateable, it's TRAGIC and SEXY. Eventually the Pokémon just try to rape each other, but the message remains clear: don't stop loving little boys, you beautiful molester! If you just be patient, they'll come around! Surely enough, Ash realizes that he's totally in love with his pet rat.

Misty on the other hand, who in the actual Pokémon show is a shrill and implacable harpy, immediately loves the shit out of every random Pokémorph who wanders into the plot, even when said Pokémon is a villain who has spent the last several years attempting to abduct or cause harm to pretty much every living thing she has come in contact with. I think Yassa may be projecting babyfur fantasies onto the poor character. In any case, Misty gets what she deserves when her bespectacled freak-duck starts undressing her in her sleep. Voltorb gets to watch.

Yassa also likes to speckle her dialogue with... unnecessary ellipses... and... write down the characters' emotions instead of drawing expressions. I mean, I think these are emotions. 'Stoned' makes sense (although not in context), but what the hell is 'junky' supposed to mean? When she's not twisting a childrens' cartoon show to meet her perversions, she's using every trick in the bad shoujo mangaka's handbook. The end result is poor pacing and poor characterization. You are given no reason to care whether or not the ten-year-old gets raped, or how the characters feel, or what will happen next. There is nothing compelling here.

Do you like Pokémon, shoujo manga, or yaoi? Then you will hate PikaSemeChu. It fails at being all three of these. There is a very specific audience that this comic is tailored to; the only people who would enjoy this comic are the people so sex-crazed that they would jack off to ANYTHING. Who cares if it's poorly drawn and poorly written? It's Pokémon-themed gay furry child pornography! Fapfapfapfapfap!

But once you've gotten over the incredibly inappropriate themes in PikaSemeChu, you'll be bored to tears by it. The art and writing are so poorly done that you really won't give a fuck about where the plot is going. Is it sad that the wonky anatomy, gratuitous screentone, awful plot and creepy bestial pederasty are completely overshadowed by how badly this comic mutilates the Pokémon canon? Yeah, I think it is.