So far as I can tell, they have no background. They up and started a webcomic one day. In their "about" section, they do mention that the artist used to work for another webcomic which must have also not been very good, since it no longer exists. I can only assume their intention was to "get discovered" somehow. The comic doesn't have a back story or any background at all. I came across the comic from one of the comics they're apparently chummy with, after a guest art by the PicturesOfCryingChildren artist was posted.

Their downfall is mainly in their inability to be consistent, have visually impressive art, captivating writing, or any sembalance of a continuing story line. Don't get me wrong, they've improved some since their earlier days, but you can't polish a turd.

Like I said, there is no real story or plot. The intention, one can only assume, was to have one punchline in each comic and move on. They reject any sense of character development, back story, or plot progression. I found their old blogspot account, which is the only place they make any attempt to tell you about their main characters' background at all... But apparently, when they bought their official domain name, they decided that wasn't important anymore.

bad art example other art example The art... well, has gotten better since the comic's inception. There's worse art out there, sure. But there's better art out there too. When the comic started, it looked a lot like a kid in middle school got a hold of some ancient version of Photoshop and started drawing for the first time in his life. After about a year and a half, the art has changed drastically. Which is both good and bad. For the first several months of the comic's "development," if the main characters weren't so much paler than the other characters, you probably wouldn't have any idea who was supposed to be who in the comic. It was inconsistent, at best.

Clicking through the archives, you can see that at some point, they were thinking about changing the look of the main character, "Nixon," who, regardless of the preposterous name, is a female. So they had a comic which references Highlander (the long since culturally irrelevant movies/show), in which they brought in a brunette which was their proposed new look for Nixon. It ended with blonde Nixon shooting brunette Nixon. Why? What was the point in that? Then, months later, they just changed her hair color anyway... to brown. This time, without any story, any plot, any explanation. Just one comic, she's blonde, and the next time you see her, she's brunette. Luckily, by this point, the drawing abilities of this girl who is supposed to have graduated college with some sort of art degree, have finally progressed to something consistent enough for you to be able to identify the main characters.

That's another thing: the characters are all stiff. Their stances are like when you had a cheap action figure or dollar-store-Barbie when you were a child and their joints weren't fully articulated. They only moved on one axis. That's what these characters mostly look like. They look like someone replaced their skeletons with rods, and joints with door hinges so their range of motion is severely limited. They're lifeless. But, I don't know, maybe in another six months, little miss college degree will learn how to fix that too. 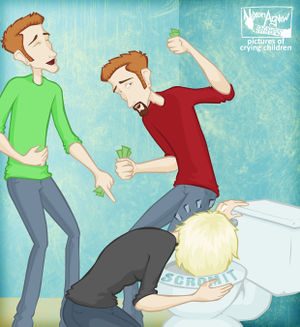 Dash's lack of dignity and greed celebrate PayPal donations as his conscience weeps and vomits.

The writing is erratic and inconsistent, not at all unlike their art. Their jokes range from puns, to pop culture references, to dick and fart jokes. They also fall back on Captain Falcon jokes WAY too often. They have comics that are single frames with no dialog at all. Then they have comics with several frames and no dialogue. Then they have comics with one frame and enough writing to fill a page in a standard book. Their format is also totally inconsistent, as you may have inferred, with comics varying in length, number of frames, size, layout (landscape/horizontal vs portrait layout/vertical)...

Most of the jokes, I feel, were merely something funny said among friends and outside of said group, the punchlines are lost. For instance, there is one in which the main characters are talking to another man who is suddenly in his underpants for a frame. Was he actually naked for a frame? Did the main characters just imagine he was clothes-less for some reason? These questions were raised often enough that they had to post a comment underneath explaining that it was NOT, in fact, an inside joke and that it was based off of a real person who does this quite often (which actually makes it an inside joke) and that it's funny because it's "random." How about you try writing a good joke next time?

Going back to the range of jokes, how can they expect to keep a reader base when they have some that are obnoxiously squeaky-clean, wholesome material and some that drop the F-bomb multiple times and tell someone to "die in a fire"? Nowhere on their page does it mention that some of their stuff might not be suitable for younger internet users.

So far as I can tell, they haven't stolen any ideas or themes from anywhere else (so at least they've got that going for them), and over the the past year+, there DOES seem to be some semblance of character identity. You do get a sense of Nixon's borderline psychotic rage disorder, and Dash's constant abuse, neglect, and apathy toward her. Recently, Nixon and Dash have gotten engaged in the comic. Which, is more a narcissistic reflection of the actual artist and writer's situation than anything else. But, I guess most women like abusive/negligent men who are entirely apathetic to their problems, so I guess that's pretty realistic. Greg has next to no development or personality, so far as I can tell, apart from the desire to Rick Roll the masses and generally be a jagoff. But, as I said, these are their only characters. It's not too hard to give three characters some sense of personality when they're your only three characters in the course of almost two years.

The artist and writer, well, they're easily accessible and post links to both their uninteresting blogs in which they drone on about uninteresting things. The artist's various online accounts suggest she went to college for art, which I still find really laughable. The writer's blog indicates that he's at least a more interesting (as a human being) than the comic is (as a comic, as toilet paper, or as anything at all). They're both apparently from New Jersey, and recently engaged. Though, the writer's blog title would indicate that he's rather indignant about that fact.

It's no wonder they're always looking for guest submissions... But at least it's not a furry webcomic.