Peter is the Wolf 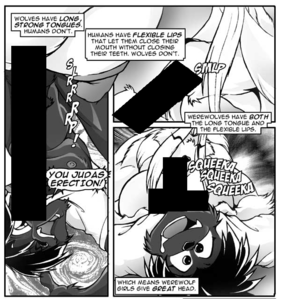 Peter is a wimpy werewolf. Everyone hates him except for his human girlfriend Sarah, whom he infects with lycanthropy one day after having unprotected sex with her. Now she turns into a huge were girl with boobs bigger than her head or anyone that's not an elephant, which is in sharp contrast with her initial waif-like appearance. Then there’s a pretty were girl named Butch who for some reason has the hots for Peter and hates Sarah. Butch discovers that Sarah’s been infected and then tries to kill her after Sarah transforms and goes on a berzerker rampage. Peter interrupts, only to then start trying to hump Peter & sex ensues. One of Peter's pack mates show up just as the pair is getting it on and shoots Sarah. When she comes to (since the bullets were normal lead, she survives it) Sarah naturally freaks out. No, not to her becoming a werewolf but about getting shot. And she discovers that she has little to no control over her actions as a werewolf.

The pack wants to execute Sarah since she’s pretty much uncontrollable. Peter tries to calm her down and then discovers that sex can tame the savage beast. So while all of his pack and family are downstairs listening in, he gets that “best blow job ever” and has furry sex with Sarah. Since the pack finds that Peter's crotch can calm her down, they choose not to execute Sarah. Now after all of this you'd think that Sarah would get angry about the whole supernatural STD thing. You'd imagine that after all of this that she'd be going after Peter with a silver gelding knife. But no... she seems to immediately take to the were life with little to no trauma. No, I take that back - she does get upset... when she thinks about losing out on cosplay costumes. Never mind that she's getting sent off to a house in the middle of nowhere because the pack can't trust her to keep control. Never mind that at least once each month she's going to become furry and that she now has a secret to keep from the rest of the world. She gets upset over freaking cosplay. Then she gets over it when she thinks about all the costumes she can make with her now buxom wolf form. (Never mind the fact that she'll never get to wear them in public without revealing the whole were thing or that she has no control over her wolf form.)

Then later she's worried about the two of them being alone in said house in the middle of nowhere. Never mind that she's already had sex with him three times, two of which have been with an audience. Luckily for her, her parents barge in on the two of them with absolutely no explanation of how they found the were safe house. If this sounds like it's a pretty thin story so far, then guess what? That's pretty much the synopsis of half of the comic that's been released so far.

BWW member MarsFire has this to add while reading this webcomic:

"When I read the story, one of the most endearing characters to me was Butch. I found myself actually sympathizing with her and hoping that she could be taken out of her situation and shown a better way. And in fact, it looked like the story was building up to that. She breaks away from her father, he gets chased out of town.She moves in with a new family who is strict against her old ways but are also tender and eager to help her heal after what we can assume was a physically, emotionally and, most likely, sexually abusive relationship. I thought this was the big event I was hoping for. Butch would take back her old name and become a proper contender for Peter's heart rather than the pack rapist.

Next page, Butch is cooking up a plan to steal Peter away and rape him to claim him.

I stopped reading at that point."

And where in the story does this incident take place?

"Chapter 13 of Book 3. On the Adult side, it's page 282. That's when the incident occurs where she abandons tracking werewolf hunter(s) and instead plans to lead the main girl to them so that they can take her out and leave Peter all for herself. As if it isn't a major breach of the Pack Laws to reveal their secret. About 234 and before it is when Butch is taken away from her father, given a new home, is treated a lot better than she was and we have a tender, character-building moment for her. But it seems the author just refuses to have her change in any way!

In other words, the authors had the chance to finally give their webcomic a decent story, but they threw it away.

Most of the storyline is about Sarah’s lack of control, which then leads to the possibility of more furry sex. Plus lots of gratuitous nudity. In all fairness, there is a non-adult version of the strip where the story is a bit more fleshed out (no pun intended) and the storyline is better, but it still doesn't hide that the main purpose of the webcomic is to have werewolves screwing.

The artwork has improved over time, but for the most part it’s still just another case of dull anime/manga style artwork. There’s nothing wrong with anime/manga styled artwork, but it’s not the beginning and ending of comic styles. It would've been nice if Rodriguez had tried to put more of his own spin on the artwork rather than going for the same vanilla style that every other anime/manga themed webcomic seems to have.

Meh. It’s not the worst thing I've ever read nor the most offensive one, but the writing just is pretty blah. If you like furry sex, then this is for you. The non-adult version isn't completely terrible, so if you like werewolves then it may be worth having just for when you've read every other thing on the internet.

This webcomic has two creators - Benjamin Rodriguez and Kris Overstreet. Evidently the webcomic started off as a gag, then turned into something bigger. Overstreet comes up with the ideas and Rodriguez draws them.

But then, I do have to admit - they don't try to hide it, nor do they make any apologies for it or go off on tangents about how misunderstood they are. And that in itself is pretty rare: webcomic artists who aren't complete drama queens or LOLcows, which is quite an accomplishment.

A more troubling feature of the webcomic is the way it brushes aside traumatic events to maintain its light pornographic tone. Sarah, delicate little creature that she is, distinctly remembers getting shot in the heart, but shrugs it off after some therapeutic screwing with Peter. Later, Butch corners Peter and tries to rape him. The biggest impact this has is that Sarah is mad at him (either because she misread the situation or she's victim-blaming) and chucks Peter in the doghouse (their pun, not mine), which really bums him out. Jean (pictured above) decides she needs to rebuild Peter's confidence with... you guessed it, some therapeutic screwing.

Coupled with its darker SFW storyline, which is about potentially executing Sarah, Butch's parental abuse, Sarah's angst about her whole life being ruined and so on, this webcomic seems to suggest that sport-fucking will solve everyone's problems. This is a lot more convincing when the conflict involves being unable to pay the plumber, rather than being put to death for your high school boyfriend's idiocy.