I saw an advertisement for this webcomic on another webcomic I read, and decided to check it out. I was expecting an "Odd Couple"-type comedy as the ad promised.

When it stopped being a comedy and tried taking itself seriously.

The webcomic's two main characters are Katina "Perki" Perkins, a vixen goth, and Candace "Candi" Charm, an otter candi raver. The ad described them as "dating", though actually they live together and share a household, and have an open relationship.

In the initial story arc, "The Sticky Wrath of Kandi Kamen": Katina, Candace, and several friends are in a shopping mall. Under the influence of sugar, Candace suddenly strips naked and dances around the mall, and gets arrested for it. Katina tries being a music store clerk to raise money for Candace's bail, but it doesn't work out, so she resorts to her backup plan of selling huge amounts of her blood. (Which I didn't think could be done in real life.) In jail, Candace is found by two unscrupulous prison guards, but she is able to fight back and make them regret their evil intentions thanks to her sugar high. Soon afterward, however, Candace is released from jail without having to face criminal charges.

Okay, the story started off as a farce. But when the next arc starts, the webcomic's tone abruptly changes and turns into a soap opera, and we're suddenly supposed to sympathize with the protagonists. When Katina was 13, a boy named Whisk fell in love with her, only to have her rebuke him in a harsh manner. We also learn that Katina at 13 was a straight-A student, never touched drugs, and rarely got into trouble. (Rather hard to swallow considering her behavior in the current storyline.)

The story returns to the present day. But the Whisk storyline hasn't been forgotten; in fact it is then told from a flashback perspective. However, it takes a goofy turn, when Katina was first rescued from a speeding truck by Brimston, then he and she conversed before all of a sudden, the scene is replayed but this time Whisk did the rescuing. (The point of all this? Your guess is as good as mine.) Then of course Katina's attitude toward Whisk abruptly changed, but unfortunately Whisk's mother wanted her son to have nothing to do with Katina. Whisk and Katina tried to see each other anyway, so Whisk's mother ended up sending her son far away. Years later, Katina finally gets contacted by Whisk...only for him to have changed quite a lot. (If the idea was to make us feel sorry for Katina, it didn't quite turn out that way. If I were Whisk's mother, I would hardly want my son around Katina either, considering how she treated him initially, as well as her practice of punching everything and everybody.)

But you ain't seen nothin' yet. In another story arc, Katina's brother Nicki returns home. And when brother and sister are together...well, it was very providential that their friend Trip happened upon them in time. But how did they end up doing such a thing in the first place? It started when Nicki was depressed when he met a salamander girl, but as might be expected, their relationship didn't work out. (At least in this furry comic, species does matter.) Katina tried to cheer her brother up by hitting up on him. In public. And-what a surprise!-everyone found out about it. This didn't occur to a straight-A student?

There's more, but why bother? The story doesn't get any better.

Originally, Jim Tarpley's drawings were monochrome with thick black lines and patches and no depth or shading, and drawn rather crudely. Monique Morgan did several strips, but sadly, only a few. Tarpley then tried adding color to his strips, then reverted to black and white. Arguably, he was new to drawing a webcomic and was experimenting with how he wanted it to look. But it takes several years before he even added some crude shading. Later he tried color again and refined his shading. 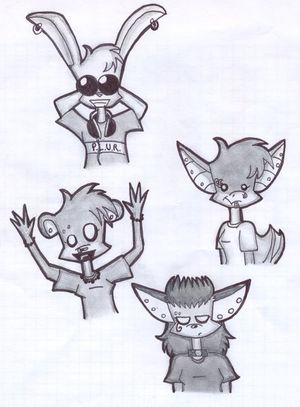 A circa 2008 example of the main characters from Tarpley's DeviantArt page.

Yet in the end the artwork was still stiff, erratically proportioned, and without any subtlety, despite years of practice. And even now, long after the webcomic has been discontinued, here is Jim Tarpley's artwork on his DeviantArt page: Jim Tarpley (calling himself "Mutt12"). Like the art in Namir Deiter, his drawing was terrible in the past and over a decade later it is still terrible.

UPDATE: Over the past several years, Jim Tarpley has been putting pictures of custom fantasy figurines that he has made on his DeviantArt page. He certainly does better with those than his comic drawings.

The author should have stuck to farce; he was okay with that. But when he tried to give his webcomic a more serious tone, he failed miserably, as described above.

The webcomic covers Katina's background well enough, but what about co-star Candace "Kandi" Charm's? Nothing. No mention of her family life. No mention of her past or what drew her to being a candi raver. Not even the story of how she and Katina met and fell in love, which would have been intriguing since they are together despite being such a mismatch-and I had originally assumed from the advertisements that that was the point of this webcomic in the first place.

Jim Tarpley indicated in his now-defunct biography that he had "really gotten serious about [drawing]" before starting this strip. Evidently not serious enough to do a good job of it. Monique Morgan was listed as a co-writer, though she only contributed a few strips to the entire webcomic. W. "Raven" Coons contributed far more to the webcomic, including several characters. Surprisingly (or not), he is not mentioned in the webcomic's byline.

The premise of two mismatched lesbian lovers could have been good. It could have been an interesting story about how two very different people could still love one another, or alternatively could have simply played everything for laughs, as it did initially. But the webcomic fails at everything; the artwork is bad, the jokes mostly fail, we hear too much about Katina "Perki" Perkins and her family and almost nothing about Candace "Candi" Charm (other than that she acts utterly goofy when she eats too much sugar and that she cries a lot), and the relationship between the two is hardly covered. What a waste!