From the about page of the site:

In case you can't understand that weeaboo gibberish, I'll translate. Once upon a time, Andeh Andy Pinkard watched an anime and read an old comic book. He liked them because they had female characters that were a) batshit insane, and b) violent. So rather than take this idea and put a new twist on it, Andy decided he should attempt to recreate it without adding anything new at all.

Setting the mood is a quote from Urban Dictionary:

Random The latest buzzword used amongst mindless teenagers as a way of showing just so utterly irreverent their predictable sense of humour is. Particularly dominant among English teens and University students, the word "random" or the act of being "random" is a desperate plea for others to recognise how totally against the grain of the norm you are and that you're really crazy and out there. Trouble is, being "random" is predictable, boring, moronic and extremely sad indeed.

Andy takes this desperation to be CUH-RAZY and OMG-WACKY-AWESOOOME to an absurd degree, as you will no doubt see in the next few links. This comic is practically the embodiment of "trying too hard". 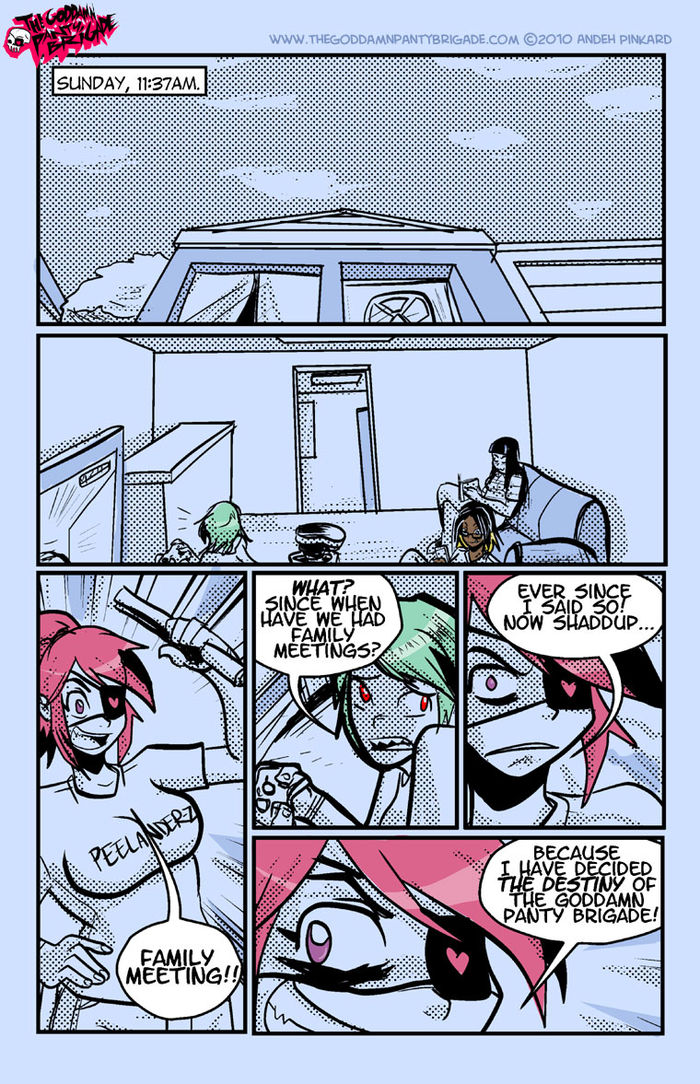 The very first page pretty much sums up what you should be expecting from this comic. There are five girls, each with one interest; because as we know, all fleshed-out and believable characters have only one interest that they quote their love for whenever they can (unless the writer actually doesn't know that much about their interest, then they just default to babbling about sex).

All of these characters:

What I'm saying is they're all essentially the same character, and that character is Tank Girl with all the charm and surrealism dragged out and replaced with weeaboo pop culture references and dick jokes. MMM YES BECAUSE DEM GRRLS SURE LOVE 'EM SOME DICK.

The Weeaboo Patrol decide to start a band, despite not knowing how to play any instruments or sing, because they are bored (OMG THAT'S SO CRAZY!). They punch some emos to assert their masculinity (OMG VIOLENT GRRLS ARE SO HOTT!) and spout some old internet memes to... I dunno, look like they've only just discovered 4chan? (OMG I POST ON 4CHAN TOO! I AM CONNECTING SO HARD WITH THESE CHARACTERS!!!) It's all pretty standard fare for anyone who's ever read a Mary Sue fanfiction; the girls go to a place, act like they think they're cool while looking like a bunch of twats, end of story. You almost start expecting Draco Malfoy to burst out of a cupboard and confess his love for one of the silly bitches.

Of course, this entire thing was a buildup to the main character flashing her laughably misshapen titties and then the next comic throws us straight into the next plot without even so much as a title page. I guess proper pacing is for SQUARES who don't understand Andy's CRAZY PUNK ATTITUDE.

After that interlude, we return to some kinda reboot or something. We get treated to Eyepatch's cameltoe as she makes YET ANOTHER REFERENCE (the same one, actually) to THAT ONE SAME ANIME. Gosh Andy, I'm beginning to doubt you're a proper weeaboo at all!

There's a half-hearted attempt to flesh out the characters a little more by giving them favourite kinds of music as well as their other one interest, but it's not enough to stop their conversations sounding like one person arguing with herself in a mirror.

Oh, and of course, yet another reference to THAT SAME ONE FUCKING ANIME. Goddammit, Andy, watch something else. That series ended a long time ago. You can't call yourself a weeaboo shut-in because you watched one show. That's like calling yourself an alcoholic because you once drank one whole bottle of wine and you've never forgotten the experience.

The story (so far) ends with the Tart Troupe abandoning their garage sale to murder passers by in a fit of WACKY RANDOM SUDDEN VIOLENCE that anyone (and everyone) saw coming from a mile away.

Protip: if the one thing you can produce is a jumbled, nonsensical mess then DON'T PRODUCE IT. 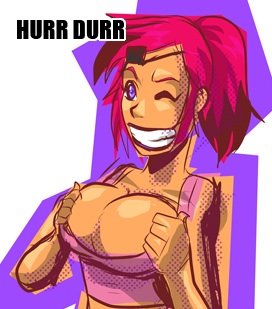 The art in Panty Brigade is about as wonky, slapdash and lazy as you can get while still being able to identify the characters as animes humans. Every panel is a mess of dilettante shading, unnecessary Ben-day dots, carcinogen gaudy colours and haphazard lines. Not only is it difficult to know what is going on, but it's genuinely unpleasant to look at, though I'm sure Andy would take that as some sort of retarded compliment. WOO YEAH, I SPIT IN THE FACE OF ARTISTIC MERIT! COME BACK WHEN YOU CAN IRONICALLY ENJOY MY SHIT SCRIBBLES!!

Also, like every other webcomic artist who uses imitation-anime to draw fanservice, Andy seems to have only witnessed the female body through the medium of Japanese cartoons. All of the characters have shiny spherical helium balloons for breasts, and god FORBID any of the Dumbass Dance Troupe have tits smaller than the size of their head. This is ANIME, MOTHERFUCKER.

He didn't write much about himself (read: nothing), but you can derive his personality from his other stuff with near 100% accuracy.

His handle is also a piece of kawaii desu stereotype by adding -eh to the end of a word with an e sound i.e. "kitty" becomes "kitteh" and "douchey" becomes "doucheh". Anyone with half a brain would assume that someone typing like that was either a child below the age of eleven or mentally disabled, but Andy seems to find it OMG CYOOT.

There is nothing wrong with social commentary and trying to push the boundaries. Comics are an art form in themselves, but there's a difference between pushing the boundaries and being an attention whore. Reading this comic, you can practically hear Andy groaning a desperate HRRRNNNGGGHHH as he strains really, really hard to be COOL and WACKY and everything else normal people find obnoxious. Comparing the things Andy took inspiration from - Tank Girl, FLCL - to Panty Brigade is like comparing Monty Python sketches to a YouTube video of a teenager in a Hot Topic shirt doing silly voices and throwing bits of cheese around. Andy essentially saw something he liked, then tried to imitate it but tried far, far too hard.

Apart from that; the characters are all the same unlikable, cookie-cutter female stereotype (omg she's VIOLENT and has an INTEREST that most people would associate with MALE GEEKS!), completely impossible to sympathize with unless you're the sort of shallow moron who'll connect with a character just because they play the same JRPG as you. The plot is entirely character driven (aka. it's just the girls dicking around constantly), which is impossible to pull off with such weak characters, and therefore falls completely flat on its ass.

UPDATE: Smackjeeves has been shut down, and this webcomic wiped with it.