Once upon a time there was a university student called Luke Page. Luke was very bored, and his recent breakup had him a bit depressed. He needed something to occupy his time so he decided to create a journal comic. He then updated said comic twice a day, and didn't put a lot of thought or effort into the lazy artwork because it was no more than a little pastime.

Over time, people started paying attention to Mr. Page's quaint little scribbles (hey, it's Smackjeeves, anything that updates more than daily eventually catches on), and he became quite excited at the prospect of his very own fanbase. Merchandise, A Forum, Fanclubs; Luke created all of these for a comic that is literally a monument to his own existence.

And thus, Luke began his attempt to sell his boring, everyday student life off as a competently written story. 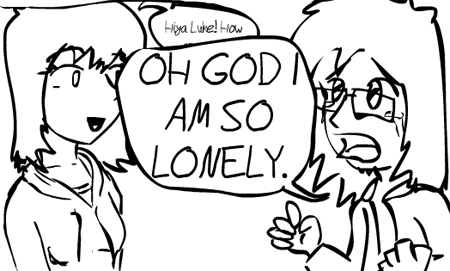 Luke's boring, everyday student life is not a competently written story, nor indeed is it a competently drawn comic. Pages of Life is what would happen if you asked an eight-year-old Tim Buckley to draw comics using only Facebook status updates as a point of reference. It is a dull, dreary little burrow of laziness and apathy. Enjoy your stay.

A good plot has a beginning, a middle and an end, and preferably somewhere around the end there should be a climax.

Human lives are not structured in the same way as a good plot. The highest, most exciting point of your life may not come along right at the end, and God knows the middle has a tendency to drag itself out. Unlike a book or movie, a human life cannot just skip the boring scenes and get straight to the action. Stay with me, I'm going somewhere with this.

Pages of Life does not have a story, a plot or any structure, because it is a journal comic. "So what?" you might think. "Some artists mainly draw comics of things that have happened to them, and they are funny and interesting!" Yes, well here is the kicker; good writers have the skill to pull highlights and sparks out of the dullest things, and good artists can make any image more attractive and compelling... But most importantly, those artists don't draw their comics every single motherfucking day. 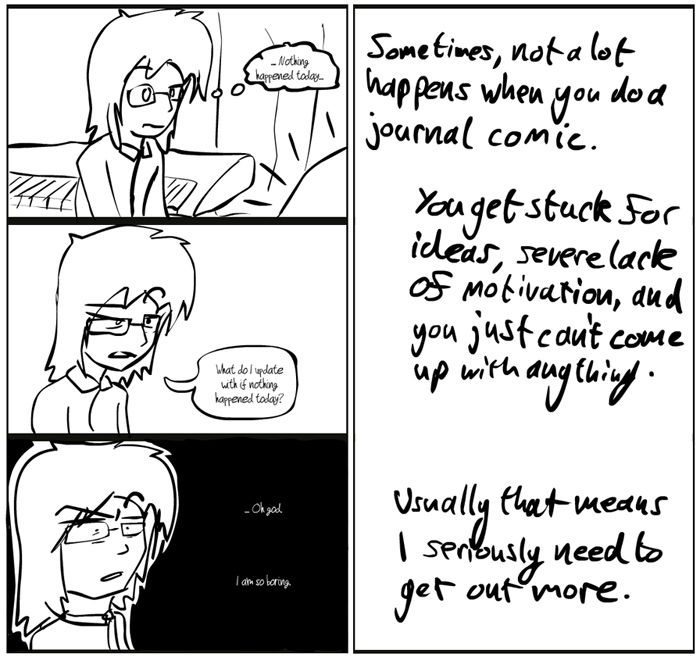 Oh yeah; no matter how dull, depressing or bleak a day is, Page will make a half-assed attempt to sculpt it into a three-panel strip and push it out the door. It's like Big Brother, but with only one housemate; a really whiny housemate. And rather than filming himself, he has to draw the dullest thing he did that day and then sellotape the drawing to your TV. And he does the drawing in fucking Flash.

Pages of Life is a way for you to receive regular updates as to the current living status of Luke Page as if he is some sort of shit tamagotchi. If you're lonely and allergic to animal hair and spend a lot of time at your PC, maybe you could read Pages of Life and symbolically adopt Luke as your apathetic, lazy little cyber-pet with no redeeming personality traits and incredibly bad graphics. But if - like most people with a life - you care very little for the day-to-day drudgery of a dull British student then this comic may not be the thing for you.

Luke uses his comic to tell us awkward truths about both himself and the people around him, which ends up giving us a somewhat uncomfortable insight into what a class act Mr. Page is. He calls Nature a MILF (and of course immediately sells t-shirts with that witty one-liner scrawled across the front). He starts dry heaving if his ex-girlfriend says hello to him in the street. He dreams about kissing his ex-girlfriend. He urinates. He chats with friends. He stares at tits. He has more dirty dreams about his ex-girlfriend. He loves his fans a big huggy bunch. He advertises his comic to store clerks. He tells girls how to dress. He flirts with girls on the internet who already have boyfriends. He obsesses over sex. He claims to have clinical depression to try to get a student loan. He has uninformed opinions about the state of the world.

These are things that a sane person should not be advertising about themselves. 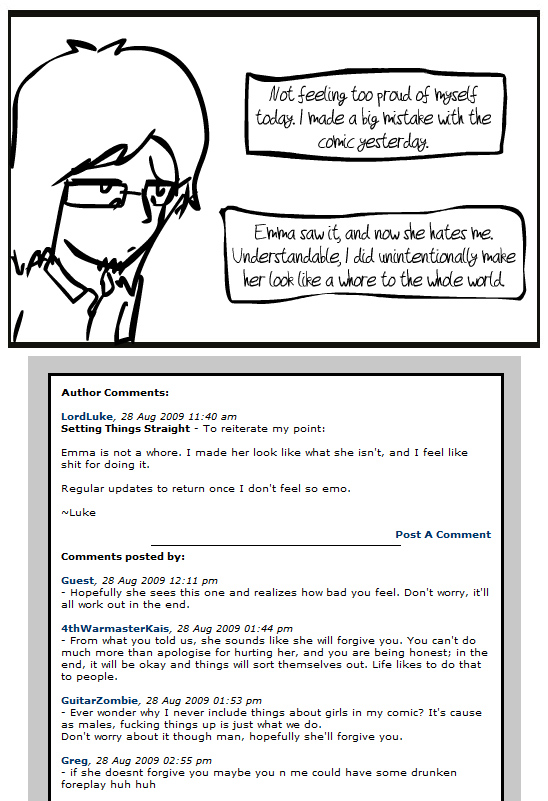 Emma? Let's remind ourselves of how this character was first introduced into the comic. 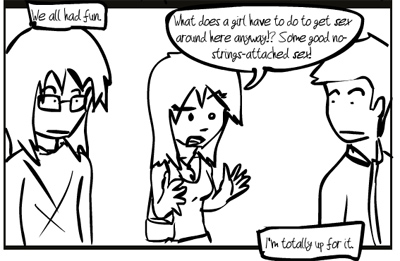 Man, you must have really fucked up! What did you do, draw a comic where she is depicted throwing her bra to people while warning them not to sniff it? Oh no wait.

Eventually realising what a monumental twat he had been, Luke ripped the comic down and sank into a slump of self-pity for a little while. Though there is a happy ending; he did apologise to Emma, with a lovely big bunch of flowers.

How do I know he apologised?

HE DREW A FUCKING COMIC ABOUT IT OF COURSE. 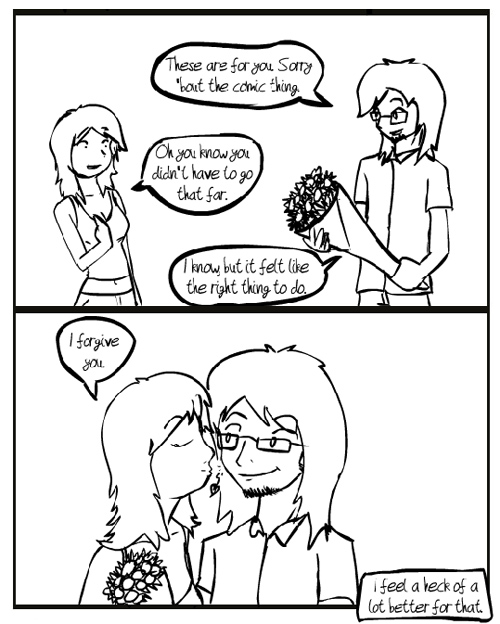 Sorry for drawing that comic of you. Here, have these flowers. Also, uhh... mind if I make a comic outta this?

The heartfelt internet attention apology definitely seemed to do the trick, though, since from that point on Mr. Page has been certainly unafraid to play the girlfriend card for some truly uncomfortable, awkward and downright sickening insights into what should be a private relationship. Yes, Mr. Page is not only willing to sell out his own existence as a badly drawn internet comic, he's willing to throw his relationship in too. What a deal!

There are only so many different ways of saying "shit" so I can't imagine this section of the article will be very long.

For a long time Pages of Life was updated twice a day, which is a schedule that does not really leave much time for putting in a lot of effort. About three-quarters of the way through the current archives the artist finally decides to update once a day instead and claims to be "spending more time on the art", but in Page's world good art = add some nonsensical shading and draw more lines on people's faces.

At the beginning the handwritten text was near-illegible and the art was so slapdash that it was often hard to tell what the hell was going on. Eventually Page created his own font for the comic from his own handwriting, though he unfortunately overlooked the fact that his handwriting is hideous.

Fortunately, though, Page has a following of low-self-esteem internet-girls that are fidgety with excitement to offer up guest comics about how incredibly kawaii and baka they are desu~ 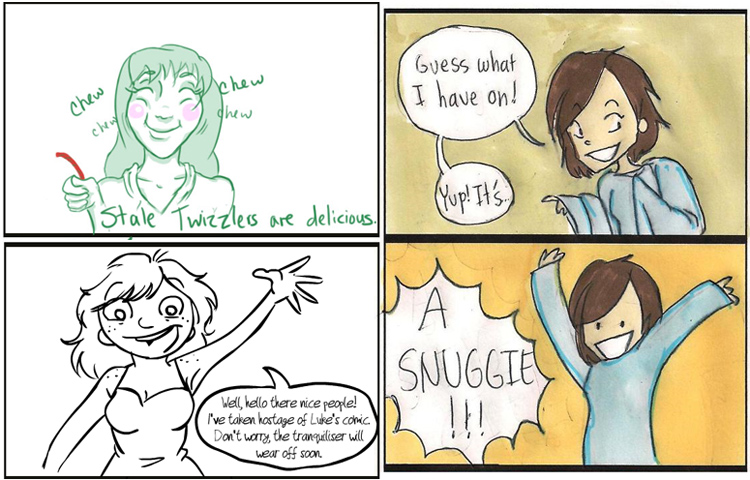 In conclusion; despite claims of 'spending more time on the art' the anatomy remains terrible, the backgrounds non-existent and his half-assed attempts at foreshortening and angles are clearly done without reference. Just because it's a journal comic doesn't mean the art has an excuse to be shit; art can be simple without being terrible. You just have to be good enough at drawing to know the difference. 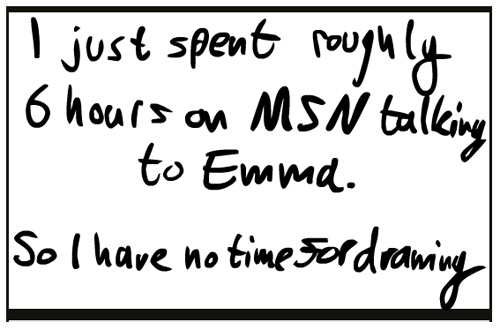 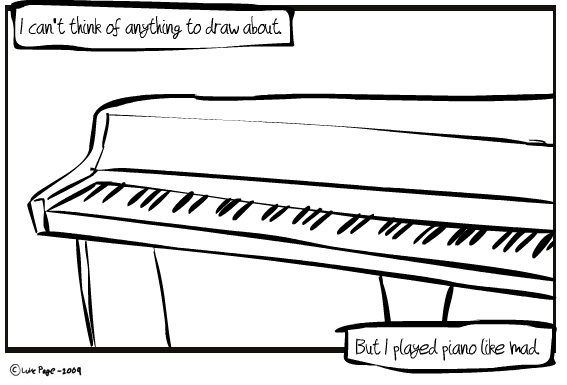 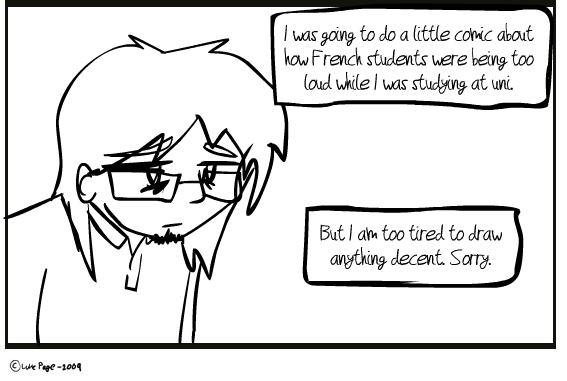 Well I was gonna do a writing review but then I drank a bunch of vodka and can't be bothered to, sorry.

Oh me! Anyway, I hope you're not the sort of person that likes reading comics regularly, because Page certainly doesn't enjoy updating them regularly. For someone who runs a daily comic he's not incredibly dedicated; often skipping updates or leaving one-panel scribbles in their place because he's 'too tired to bother'.

If you like your comics pre-planned with scripts and thoughts into the panel layout you'll be unhappy too, as Page's approach to comic creation seems to essentially be sitting down at his PC at the end of the day and thinking "Did I kiss my girlfriend today? Can I make a comic out of that again? Am I awake and sober enough to bother drawing? Maybe I'll just draw my keyboard."

Sometimes his comics are based on the tabletop roleplay games he has taken part in. The writing in these cannot really be applauded since he is essentially just doing his "repeat something that happened today" routine, it just seems more creative because there is a vague plot there (that was written by somebody else). The tabletop comics come out of nowhere with no prior warning and disappear again afterwards, making their inclusion in the comic seem odd and out-of-place. (Today I'm whining about my lack of sex. TODAY I'M FIGHTING A DRAGON. Today I want people to like me more.)

So, we've covered that Pages of Life is boring, creepy and badly drawn, but so what? It's a small comic with an even smaller following, why should the BWW bother creating an article for this? The answer lies with its creator, Mr. Luke Page, and his enormous, monumental Buckley-esque ego.

Page began his comic as something to keep him occupied instead of constantly moping over his recent breakup. The art was shit and the strips were boring but it was sort of forgiveable because people felt sorry for him, and were a bit glad that he was doing something to cheer himself up. That seemed to fly completely over Luke's head, though, as nowadays he seems to consider himself quite the remarkable little artist.

In no particular order, Luke Page has been known to;

All these things show an unforgivable lack of self awareness. Either that, or shameless greed. Probably some combination of both.

He either honestly thinks his comic is good and worth paying for (which means his ego has gotten to the point he can literally be considered delusional), or he just doesn't give a fuck and offers to sell anyone anything on the off chance someone might be dumb enough to pay. He's like one of those chubby fourteen year old boys who try to sell their virginity on eBay. 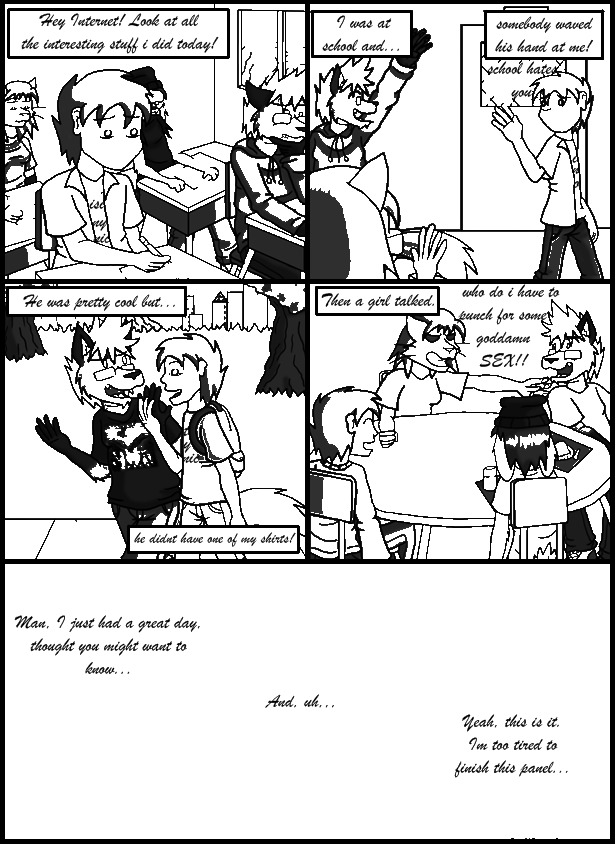 We at the BWW are very proud of our terrible comic cross-breeding programme.

He needs to set his computer on fire.

UPDATE: There have been no updates either to this webcomic or even to his DeviantArt account in years, so Luke Page may well have taken this advice.

SECOND UPDATE: Smackjeeves has been shut down, and this webcomic wiped with it.