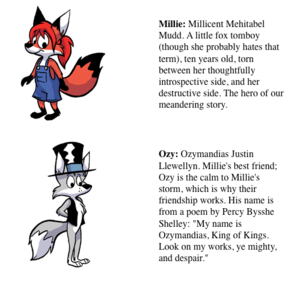 One of the first webcomics I learned about when I started reading webcomics, and it actually managed to live up to the hype it received.

The webcomic weakened a bit as it got toward the end, but not to the "jump the shark" level, and D. C. Simpson ended it with a bang, if not quite the ending I hoped. (I would have preferred Locke over Llewellyn as the groom.)

There is no overall plot, just a series of gags and story arcs.

What typically happens in this webcomic.

Monochrome line drawings with some shading, with the occasional color ones. Rather coarse at the beginning, but soon gets much better. The characters look like genuine children and adults, and are cute without being excessively so. The proportions of the figures make the characters actually look more animal-like than many furry artists manage to achieve - a major part of the strip's charm. 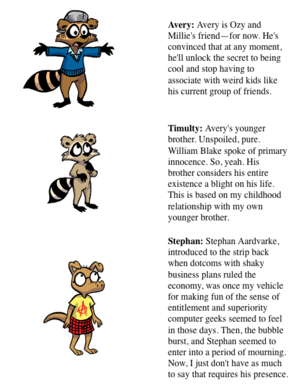 The webcomic is much like the old Calvin and Hobbes strip in the sense that the children have unusually large vocabularies for their age, but is otherwise not derivative. Unlike Calvin and Hobbes, where the tiger is just a stuffed toy made alive by the boy's imagination, fantastical elements in the strip are real - not really a surprise in a comic whose characters are anthropomorphic animals. The dragon Llewellyn and his relatives are weird but real, and the pirate world hidden in the sofa is also real - in fact, the pirate captain Locke is Millie's biological father. Locke also ages back and forth between childhood and adulthood. There is a series of storylines over the course of the strip, some of which work and some which don't. Some representative strips over the years:

1998: Ozy and Millie disprove an old quote
1999: Millie meets Captain Locke
2000: Millie tries her paw at avant-garde art
2001: Ozy is an arctic fox, which is not always advantageous in winter
2002: How our heroes' plans typically turn out
2003: Millie's plans for Career Day at school
2004: Millie talks religion (D. C. Simpson herself is an atheist, BTW)
2005: Millie shows her schoolwork to her mother
2006: Llewellyn deals with the neighbors
2007: In real life, D. C. Simpson will take this idea much further
2008: Ms. Mudd's retaliation against an unfair schoolteacher


Also, there is the annual running joke of Millie shaving Ozy, akin to Lucy and the football in the old Peanuts comic.

Dana Simpson (she no longer uses her former name D. C. Simpson) is best known as the author of the well-regarded furry webcomic Ozy and Millie, which has received much acclaim and numerous awards. Whether this person's becoming a male-to-female transgender has had anything to do with it, Simpson has also produced duds such as the bungled Raine Dog, although humorless, pretentious political comics such as I Drew This prove that even in her Ozy and Millie days she had a penchant for being overblown and unfunny.

But Simpson seems to have gotten back into her groove, finally receiving newspaper syndication with her latest strip Phoebe And Her Unicorn (originally titled Heavenly Nostrils) and that has turned out well enough, so there is hope for her yet.

Fortunately this is what Dana Simpson will always be remembered by.

The awards this comic has won:

And TV Tropes has an article on them too: