I'm not gonna lie: I like anime and manga. It's undoubtedly one of the most influential mediums of art to come out of the 20th century and pervade into the 21st century; its value as a medium is further increased here where I live because of its exotic Japanese origin. But of course, whenever something new and exotic appears, there's always someone ready to do to it what shady Chinese manufacturers have done to Apple Products: make a cheaper, lesser quality version of it while purporting that it's comparable to the original. Inevitably, Otaku-no-Yen is an example of this, and the fact that it warrants the affiliation to anime and manga is one of the many reasons why I normally hesitate to admit anything to do with the "genre" and "culture."

It's hard to pinpoint a downfall in this webcomic, though I would argue that its primary downfall was the author thinking that she could take such a bland premise - a bunch of "otakus" and their "wacky hijinks" at anime cons - and run with it for over five years.

The "story" follows a bunch anime fan pals who go to conventions. They're named Roku, Nobaku and Richard. I say "story" with profuse irony and sarcasm because this story has absolutely zero plot. You see, a conventional story must have a plot, and that plot must be a central conflict that follows the dynamic of an exposition, rising action, climax, falling action, and resolution - not rocket science, people, this is something you learn in middle school. You could argue that this webcomic is excused from that because it's "slice-of-life," but you are dead wrong; slice-of-life is a "story" too, just one that closely follows "slices" of the "life" or "lives" of the characters in it. Perhaps the words you're looking for is a vignette, but the last time I checked vignettes are supposed to be short and sweet, not some staggering. In fact, the only conflict I find in this webcomic is meta, between me and the actual webcomic itself; I was trying to make sense of this webcomic, but it said "Nope! Fuck you, baka! Suck on my kawaii pocky, uguu~!"

Have you ever noticed how many amateur artists who choose to emulate anime and manga "styles" all seem to have this weird sense of entitlement? Like they think they don't have to pay attention to anatomic principles because they're drawing a bunch of saucer-eyed androgynes with technicolored porcupines on their heads. Well, Otaku-no-Yen is no different. In this webcomic you will be so overwhelmed by cliche over-exaggerated expressions and snout faces you won't be able to think of a convoluted enough idiom to mock them with (like so.) In fact, here's an example of how bad the anatomy is. 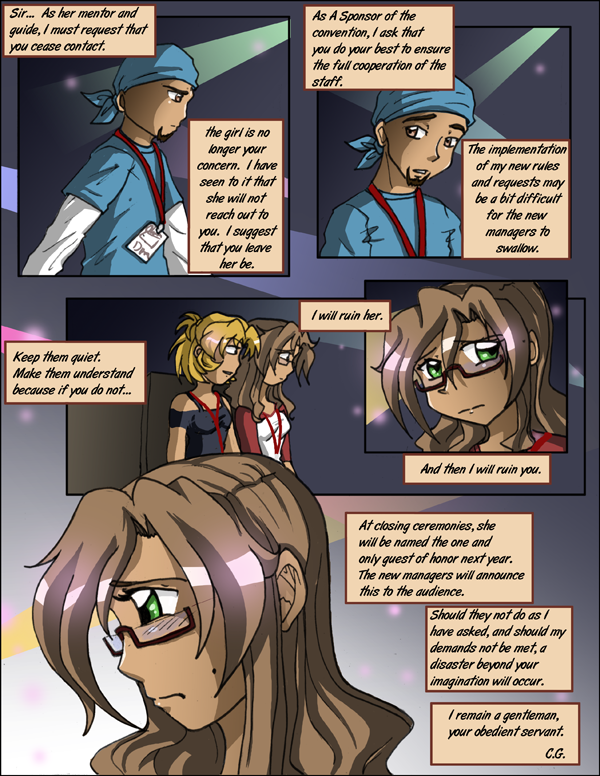 The latest and greatest strip

Believe it or not though, this isn't the worst example of how bad the art is; it was a lot worse in the webcomic's younger stages, so it has improved, but behind the implementation of bright colors and oil-shiny hair it's still pretty mediocre based on the commentary I just provided.

You'd be hard pressed to find anything funny enough to make you even chuckle in this webcomic (unless you're some kind of asspie who will laugh at almost anything.) This webcomic tries to throw in sex jokes and jabs at specific anime and the otaku culture with the grace of a flipper-handed freak child with Parkinson's trying to paint a picture. Cows having sex sure is funnay, ain't it? Even more so when its implication is that contrived. A girl walking into a conveniently placed pole while looking at yaoi? Something tells me the dumbass would've walked into the pole even without the shemale smut she was distracted by. And as you can see, that's just the tip of the iceberg; later on you see what STAGGERING improvement the humor makes with a fucking Pokemon reference. Haha, you get it? It's about Pokemon and Joey's Ratatta! So funny and novel! Laugh, you sheep! Eventually things kick off with another supposed parody, which is really just an excuse to put original characters into a different story dynamic (the author must've realized by now the nonexistence of a story in her comic.) This would be a parody if it was actually mocking whatever the fuck it was parodying instead of pissing all over the fourth wall and being overly self-depreciative. But hey, if you're throwing punches at yourself, I'm sure you won't mind if I join in.

But enough about the jokes, take a look at the characters for a minute. Roku is you typical hyper and "quirky" anime fangirl whose so high-strung she could dangle from the goddamn moon and may or may not be an avatar for the author (in which case, adding -chan to the end of her name is lingual faux pas in Japanese because you don't use honorifics for yourself unless you want to look like a self-important douche faggot.) Nobaku is supposed to be the sane man (or woman, but her sanity is only comparative; she's about as sane as Charles Manson during a clam bake.) And then there's Richard, supposedly Roku's love interest, and is just the token dude who has to put up with all this shit instead of doing filing a restraining order and moving to the other side of the country, as any intelligent person would do in that situation. Other than that, there's no quirks to these characters. If you're going to have shitty flat characters, you need to have damn good jokes to compensate. Unfortunately, there's nothing novel or funny about any of these jokes, so you need to have characters that are endearing, and these characters are anything but.

There was a particularly bad strip that caused quite a bit of controversy when it was first posted, but has since been pulled. Luckily though, copies of these strips still exist for viewing. The basic premise is this: Roku teaches a class on how to draw anime (which, knowing her, means they're just going to learn all the same tired shortcuts and shitty techniques all weebs use), but one student states that he doesn't like Anime. In fact, he's reading a copy of Macbeth, to which Roku responds "Aren't you a little young to be reading that?" Several people pointed out that 1) He's completely right about Shakespeare being better than anime, especially the other shlock titles that get mentioned, and 2) isn't it a good thing for children to read? It's hard enough to get them to do it on their own, let alone timeless stuff like Shakespeare.

But that's not the bad part. The bad part is when Roku tries to "teach" this boy a lesson... by stabbing his desk with a hobby knife. This gets completely brushed off in-comic as being comedic and endearing, even though if this happened in real life, that kid's parents would have the cops on her ass the next day. There's this implied message that anime totally isn't shit and anyone thinks otherwise is just a closed-minded bigot, but instead it makes a pretty good case for how batshit insane weaboos can be about their hobby. Now I will give the writer credit for acknowledging this was a terrible idea and pulling it... but personally, I had to bring this back simply because there's an amazingly good parody of it.

Miss Shannon doesn't seem like a drama whore. From what I've seen, she's just your typical batshit crazy anime fan. Y'know, one of those people who jump around dancing to Hare Hare Yukai or whatever while spouting broken Japanese in an anime club but then clam up like a self-pitying bivalve the minute they have to conform to society. But as long as she's sensible enough to reserve her flip-out side of her personality for those moments of camaraderie with other discreetly high-strung anime fans, I guess there's not much I'm allowed to complain about.

In the grand scheme of things, this just another one of those wannabe anime/manga webcomics. Fortunately though, it's not as high profile as the equally shitty Leet Street Boys, so I'm a little less antipathetic towards Shannon and Otaku-no-Yen for comparatively keeping a low profile, but both works still warrant the same bucket of failure category because A) both titles are just reworded puns on The Backstreet Boys and Hokuto no Ken respectively, and B) they both exemplify that nerd-brand of aggravating obnoxiousness.