Order of the Black Dog

I should point out the fact that there were authors such as R. H. Junior and Isabel Marks that have done a number of webcomics, but we only reviewed a sample of them because there were not a lot of differences between them. Immelmann, however, is a different case. His oldest major webcomic, Concession, was horrible enough to receive an Atomic Bomb rating; his subsequent webcomic Ballerina Mafia was not so hideous, but merely a turkey, and now we have this one which is still going, and it superficially looks much better that his previous creations. Will this webcomic be considered bad or not bad? I could not resist the temptation to find out, and upon completion of this review the answer will be revealed.

I have read only part of the story, but nothing I have seen has gone wrong.

The story is written and formatted like a comic book series with a cover page for each "issue", so I will review this webcomic accordingly:

#1: The Black Idol, Part 1: Good cover page, as it does a good job of illustrating the tone and content of the series. Moving on to the first pages, the science fiction setting is established, and now comes the Lovecraftian horror story. The story moves to a college where the news of the space expedition is shown on television and then we learn the Lovecraftian figure from page 4 has been moved to Earth. Of course, no possible harm can come from this alien object, right?

It turns out that the cat-girl from the college is the daughter of one of the researchers who are examining the alien relic. Furthermore, there already has been trouble at the college...caused perhaps by you-know-what? But our cat-girl hero and her new friend have decided to look for trouble on their own accord, and lo and behold, they find it! But it so happens that the alien relic is causing trouble at the research center as well!

#2: The Black Idol, Part 2: I did say that this webcomic was adult. Anyway, the cat-girl finds a way out of the chamber, but the tentacle monster got her tongue. (It was impossible not to think of that cliché!) She runs off, with her friend trying to follow her, but somebody is already on to the matter. Namely, male anthros in black. And they reveal to the cat-girl's friend the situation in the research center. Next the men in black have caught up with the cat-girl and now it's time to deal with both monsters. They succeed, but the men in black want the cat-girl and her friend to forget what they saw. But the sixty-four dollar question is, will they be successful?

#4: The Curse Of The Black Dog: The story goes back in time to when a special unit of the Cairo police has been created to investigate the then-recent cult murders. Our heroes get to work and talk about ancient legends presumably related to the cult. The story returns to the present with the men in black having to investigate the college. Back in the past, the new police unit finds the recent murders all having a black wolf in common, but also many fundamental differences between those murders as well. In the present, the raccoon man in black interviews the cat-girl's friend and describes his own background. Back in the past...uh-oh, the black wolf is making an appearance! Back in the present...uh-oh, cat-girl's friend informs raccoon man that she knows about the failed attempt to erase her memory! Back in the past...two of the policemen have been victimized by the black wolf, and one policeman decides to sacrifice himself to prevent the black wolf from doing more harm. Returning to the present, raccoon man again meets cat-girl's friend, and the friend admits that her computer successfully recorded everything that transpired earlier and reminded her of what had happened. Once more in the past, the surviving team members cannot do anything more officially, so they decide to do something about the black wolf spirit on their own accord. Returning to the present, the friend tells the raccoon man about her finding old records of the police team's work that was mentioned in the flashbacks, and raccoon man's boss tells him to research all those records. And then we see the cat-girl in bed...and the black wolf appears near her!

#5: The One Who Crawls, Part 1: It seems that the grotesque alien is now safely hidden inside a former bomb shelter. As I said, seems. And the laboratory has been doing tests on the alien, such as finding that it eats meat and absorbs rather than consumes dead people. Surprise, surprise, the pesky alien is refusing to stay put. Meanwhile, the cat-girl seems to have recovered from her earlier injuries, so her friend takes her shopping and has her buy new clothing. Back home, cat-girl is with her friend and sees a toddler girl with an older woman, but it turns out to have been a dream. Back at the laboratory, the alien is still being subject to various scientific tests. and as it turns out, it is not only the cat-girl doing the dreaming. But the scientific examinations are getting results now. The news media talks about space exploration, but for the cat-girl, the pesky black wolf makes another appearance.

#6: The One Who Crawls, Part 2: Two people meet in a park. Is this an attempt at blackmail? But it has nothing to do with money. Meanwhile, the cat-girl is evidently dreaming again...but the dream starts taking an unpleasant turn. More unpleasant dreaming? Oh, this time it's not the cat-girl's dream, and wolfie has made a visit to this person too. Meanwhile, one of the people in the park wants to pay a personal visit to the idol. The pair somehow manage to sneak in, but then the one who started the whole thing does the dirty on his companion. And what was this person's intention? Did he actually anticipate that this would result?

This should be plenty to tell you what the story is all about. Those whose interest has been piqued by the above description can click on the webcomic link and read further.

Immelmann's art was originally pretty wretched in his/her earlier webcomics, but in this webcomic he/she has done a much better job:

See what Immelmann can do when he/she puts in real effort?

The art style is similar, at least at the outset, but instead of figures that are crude blobs with stick figure limbs and pentagonal "cat faces" like Immelmann did in the past, the animal figures are now fully developed and detailed with real animal features and markings, and the backgrounds are developed and shaded instead of being simply flat stiff panels, with real perspective and detailing for a change.

And the art even gets better as the webcomic continues!

The clothing has folds and even a plaid pattern on the elephant-person's shirt, and the eyeshades in this picture show color change properly. Clearly Immelmann has now gotten serious about drawing for this webcomic.

The story does not move too quickly or too slowly, flashbacks are not overdone or confusing (a lot of authors have this problem), events happen logically, and the characters are realistic and act as expected under the circumstances. 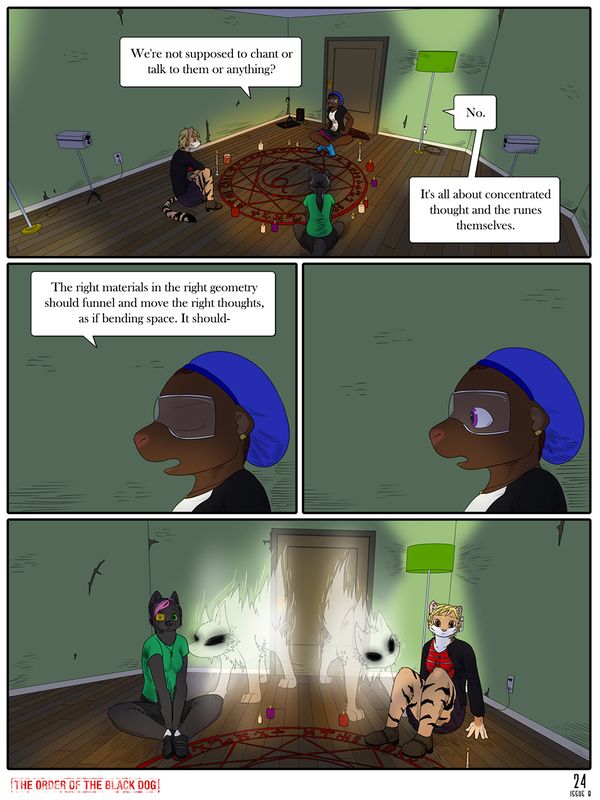 No, no, no, you silly demons! You are supposed to appear inside the pentagram!

Well, there are a few questionable moments, such as the professor allowing the art student to illicitly explore the office of the professor who had disappeared in the first place, and then to go alone into a clearly dangerous area. The professor doesn't get into trouble for it, even after the student gets hospitalized? And with the Black Idol causing so much trouble as soon as it was brought to Earth, no matter how everybody tries to contain it, the government wouldn't get the idea of putting the Black Idol into a safer location, say, on a space station where it can be kept far enough away from the public?

Order of the Black Dog Versus Jack

Those of you who see this review might think of another webcomic combining furries with the supernatural-namely Jack.

But though Order of the Black Dog and Jack have similar themes, this one does it infinitely better. How so? By far the most obvious comparison is that Immelmann uses semi-realistic animal characters and backgrounds in his/her artwork, unlike David Hopkins with his horribly-drawn art whose animal characters look ridiculously cartoony. But besides that, while Jack is essentially a group of disconnected stories, Order of the Back Dog is one single, logical narrative. As for the characters, other than the Black Idol itself, there are no starring characters, but the ones who exist are credible, unlike Jack who is an emotionally maladjusted, inconsistently-behaving Grim Reaper character.

However, the biggest difference between the two webcomics is their very atmosphere. Jack is dark, maudlin, and depressive, while Order of the Black Dog shows a normal world threatened by the Black Idol which was brought in from outer space. In Jack, when even the normal world looks distorted and depressing, when Jack or any other supernatural creature appears on Earth, there is no sense of change; the appearance of an angel or demon is as banal as the appearance of the mailman. But when the Black Idol or black wolf appears in the regular world, there is a real sense of things being suddenly different. Horror is more effective when it contrasts with reality rather than appears to be a normal part of it.

Immelmann describes herself and her comic right here. Did I say "herself"? That's right, Immy has, like D. C. Simpson, switched from a male to female gender.

Beneath one of the strips, one person commented that "The entire comic is going to be a circle of terrible things happening to furry people that no one is able to stop like Concession was, isn’t it? Peace out." Immelmann made no answer, but one could say yes, that is the case. So why did Concession warrant an Atomic Bomb while Order of the Black Dog is listed as one of our Not Bad webcomics?

One can clearly say that Immelmann has matured, at least as a cartoonist, male-to-female transgender or not. Concession was originally meant as a furry parody of the business of movie theater concession counters which sell snacks, then it soon became a combination of wretchedly bad jokes and schlock horror with gore and pederasty, unrealistic characters, and a story which made no sense. Ballerina Mafia stuck to jokes, but like Isabel Marks, Immelmann sucks at humorous writing. But whatever got him/her to do this, Immelmann suddenly decided to come up with good entertainment for a change. You may or may not like the genre, but Immelmann is now making a real attempt at a good webcomic with good art, a logical storyline, and believable characters. There are a few mild laughs, such as the Cairo policeman talking about creating a secret society with a secret handshake, but Immelmann does not try to choke us with terrible jokes like he/she did in the past.

Well, Immelmann, I have one thing to say to you: Congratulations.