This was brought up on the forums as an “emergency action notification”. While it is not exactly as bad as the person said it was, it also wasn’t exactly good either, as you’ll see later on in the review.

Normally, a reviewer would say that it’s been bad since day one. But I think a better word here would be "stagnant".

The misadventures of two fat mermaids and their equally as fat friends. Simple enough as it is really.

For this review, I will compare the artwork done by Blake and Sarah. 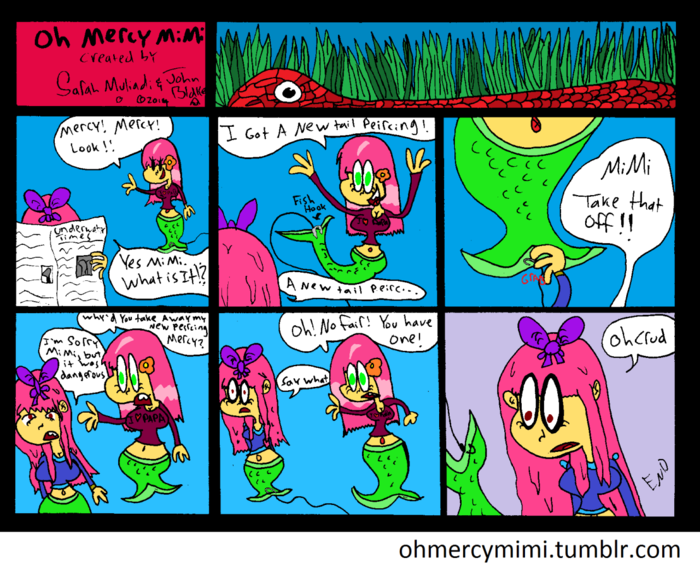 Here he tends to go for the style you see on Breadwinners and any of AnimatedJames’ cartoons. Now alone, already sounds like a blessing in disguise. Combining the laid back, geometrical style of his animations with the zany at times off-model animation that Breadwinners has seems like it has potential.

The problem here though is that he tends to be very inconsistent in the character designs (which I will get to later), changing every scene they’re in. As a result, It makes it looks like it was drawn by a first-grader.

And the exaggerations? Listen, I understand you want to make it seem like they're fat, but to me this gives off the feeling that their mermaid cousins of Jessica Rabbit. (Which now that i’m thinking about it, actually wouldn’t be such a bad thing...) Lay off the exaggerations will you? 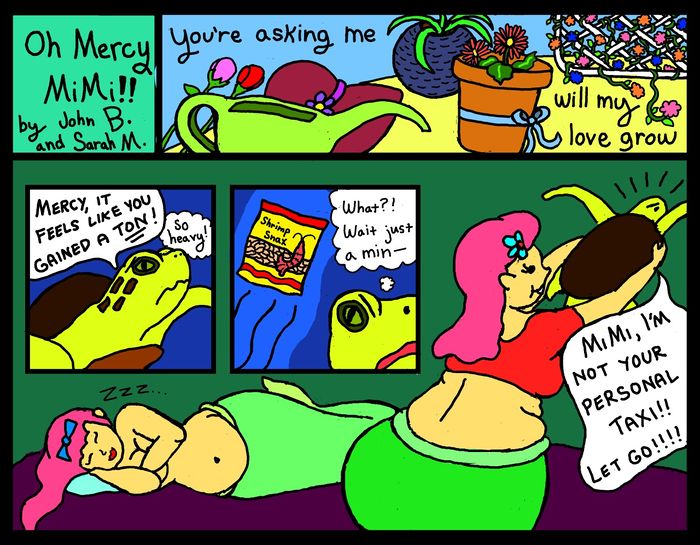 Sarah’s work combines a semi-anime face with a more realistic body. While not as creative as the other writer; it looks more professional both in its quality and its consistency.

But nonetheless it is still held back by this one glaring flaw...

The characters (with the exception of the sea animals... and two of the main cast.) all look like fat mermaids. So, here's the deal: Fat people are fine for comics, I myself will allow you to put a fat character in your comic, but if you're going to do it...

AT LEAST ONLY DO IT FOR ONE CHARACTER!

I wonder what they were doing when they were designing the characters: Maybe they were playing the ever popular game Choose A High School Cliche’s Face and Add A Fat Load of Mass?

This basically describes every character. You have the main character who has an alter-ego, the ditz, the quiet boyfriend, the twins’ mother, (who also works as a stripper) the rock and roll star, the crazy jealous woman and the emo guy.

And there you have it! I’ve saved you countless hours of time of having to look up a copy of one of your high school drama films you used to watch ten somethin' years ago!

Here's the deal; I understand that they have done two three part stories. But since two is still two, I will only be talking about the writing for the strips themselves...

It’s not good to say the least, let’s use this picture as an example. 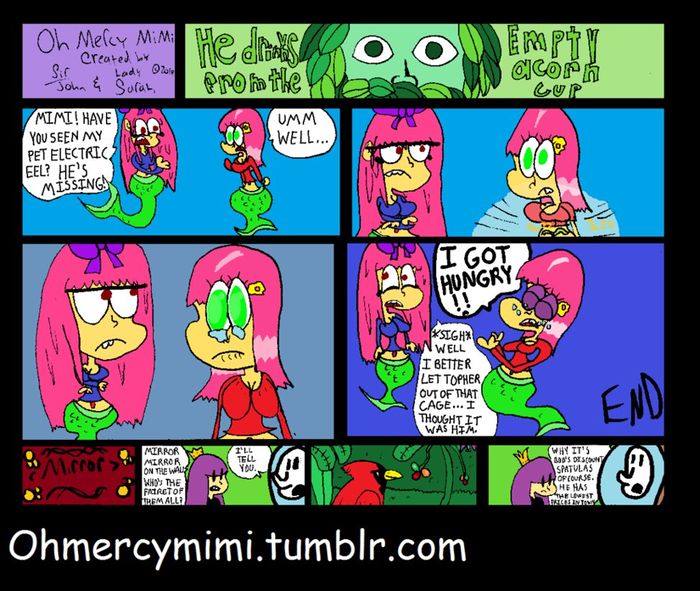 So, the joke is that MiMi (the mermaid in question) ate the electric eel because she was hungry? Now to be fair, it does start off pretty decent. But it all comes crashing down when MiMi confesses to eating her because she got hungry.

This in turn makes the joke sound unfinished, where’s the punchline? Where in what way am I supposed to laugh? Why not have her say that she thought it was a bread stick or a rotten carrot? But no, she confesses to eating the eel because... she got hungry.

Way to be an anti-joke chicken comic. Way to go.

But that’s not the only joke that has flunked to pass comedy school, here’s another one from later on in the series. 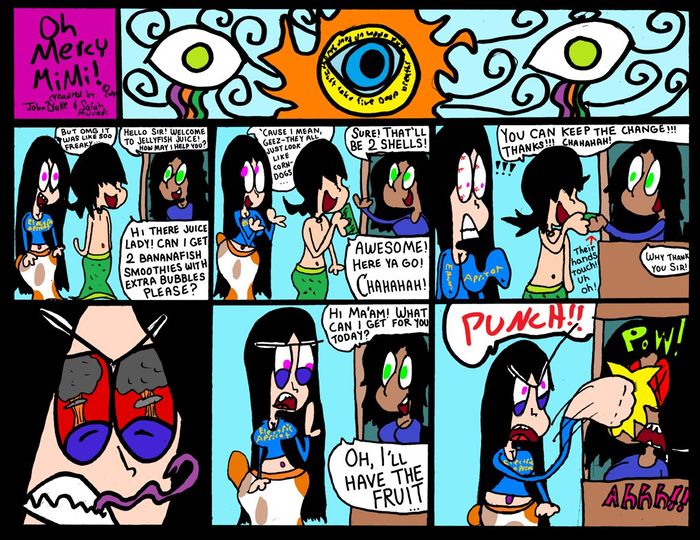 Here, the punchline is set in place; but it is so cheesy it makes SpongeBob look like tomato sauce. She’ll have the fruit punch? What are you, Corny McLameJoke?

Another problem I have with this joke is that you can see it coming a mile away. The girl is a jealous crazy bitch who will go apeshit if she sees her boyfriend holding hands with another girl. You know what’s going to happen.

In short: The humor is funny only for five-year-olds, which is probably what this was for anything.

John Blake is the man behind another comic, Jim and Sally, owns a indie record label, has been drawing since most of his life and has been influenced by some of the best names in our earth. (Tex Avery, The Beatles and John K to name a few) He has not really caused enough trouble to get us interested.

Sarah Muliadi has a college degree at art, a singer-songwriter, homeschooled and god knows what else. She’s basically a jack of all trades. She, like John has had no drama as far as we know yet.

It’s not really a total disaster per se, but really; once you get it down, it's basically just a bunch of high school teenagers if they were under the sea, fat and... that’s it. I wouldn’t say skip it completely, because it does have the potential to improve,(there might need to be a complete overhaul of the idea) but it’s best you read the later comics. (The quality starts to improves around the 12th comic or so)