Of Conquests And Consequences

This webcomic has been spoken of for a while on the forum – but for some reason, nobody ever bothered to actually review the webcomic... until now.

Think of Twilight or Dominic Deegan: a pair of jokers come up with a unique settting, culture and race of people the they think are totes original, and thinks it's so perfect that she has to set up a whole evil empire of strawmen to demonstrate their superiority, and make a webcomic about that.

Ya... this webcomic was never good. 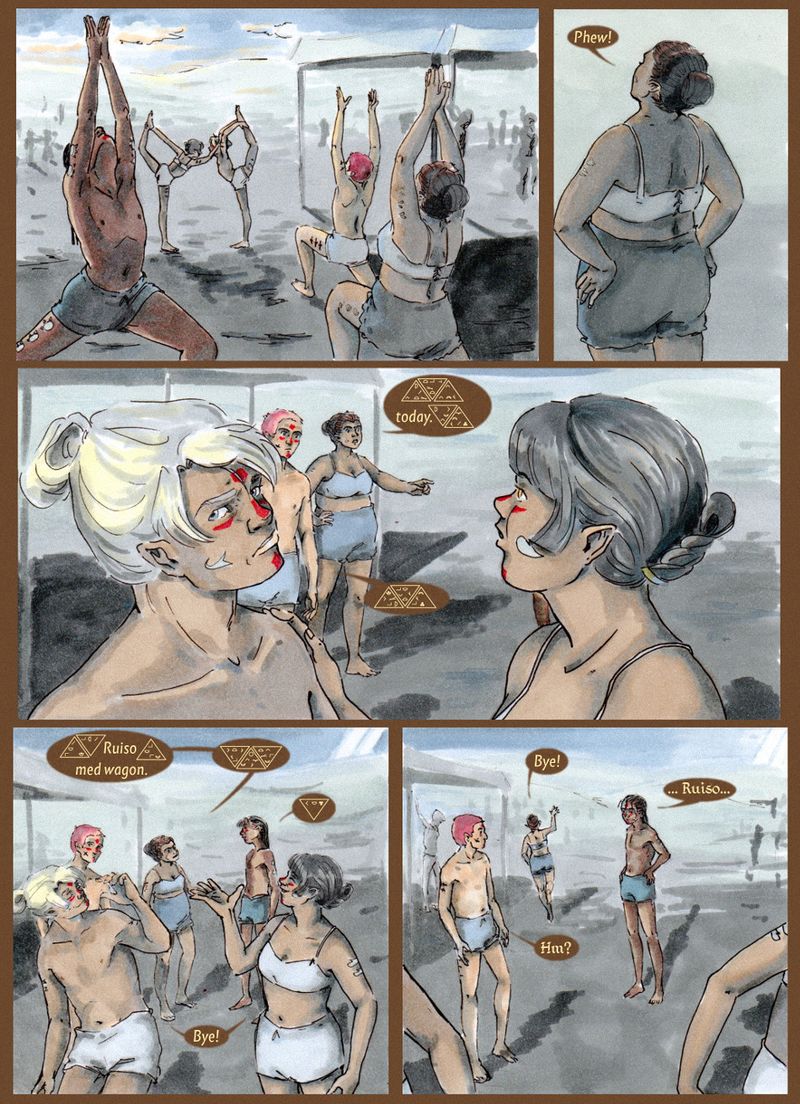 I don't know what Joolita's artistic background is, but she's good. She's a good artist. We're talking college art student grade, professional work here – it often appears as if done with watercolors. Oh, and everyone has elf ears, but act and appear human beyond that. Equally, everyone in the Mary Sue race have these little face tattoo marks that are never explained in the webcomic itself, but seem to indicate clan, caste and occuption. Sure, it might be explained in the cultural guide, but... again... that shit's broken.

The webcomic has good color composition, everything looks skillfully handrawn – though at times, early on in the webcomic, the faces could look a bit janky, however now they all look quite good.

The only real bugaboo this reviewer has about the art is the Mary Sue race itself. You see, them's brown people. But their anatomy? It's all over the place. Some of them have dark hair done up in rasta braids, some are blond with strange white patches of skin and blue eyes. Equally, the anatomy of the Huzsan Mary Sue people's haplogroup seems to be oddly Caucasian.

What's a haplogroup? Think... race, sort of, but not quite. Its the way that people from Poland tend to look different from the French, but are still both what you'd call white europeans, right? The physical characteristics that differentiate one people group from another. Now, the "empire" is all white folks – and the Mary Sues are all brown, that's easy enough to see in the art, though as shown in the above art example then some of them are browner than others (which is never addressed in the comic).

The Mary Sues all largely have body types that quite frankly just look like recolored white people.

Tell me the girl on the left doesn't look like a white girl with a brown flood fill? Or this guy here. It's a question of mainly how the faces are drawn, and this reviewer suspects that it's a product of the artist being Polish and simply not being good at drawing anything other than the same kind of white people that she lives around. This isn't really a critique of the art – ya ok, it is, but the point is that this clash probably isn't something the artist does on purpose. It's something that can be improved upon, for sure, and it doesn't detract that much from the webcomic, but it is noticeable.

As a final detail, then this of course wouldn't be a Mary Sue YA-wannabe product if there weren't a few cute slender men to gawk at. AFAIK there isn't any official fap-bait made of any of this, but I would be very surprised if the artist doesn't have all kinds of fap-bait hidden away.

The webcomic's plot so far:

That's where the webcomic got to at the time of the review – and honestly, it seems as if the webcomic has completely floundered: the webcomic might've been supposed to be about this prince fellow learning the ways of the Mary Sue people and fully integrating (because converting the evil white man, making him reject his whiteness, and turn to the glorious ways of the brown people is a classic SJW trope) – but at this point, there are far too many minor sideplots and side-characters in play.

If it had been more focused on the prince, on his struggles, then it might actually have been worth a read. You know... if the webcomic didn't have overall terrible writing.

This reviewer will assume that at this point all readers of this review will have understood that this homemade culture is entirely made of Mary Sues, right? Because the writing sure reflects that. Fuck me, they even made up an entire language, because they are so damn special.

A battle with brown-skinned desert-fighters in loose clothes with curved sabers vs. pale foes clad in heavy metal armor with longswords and lances? You have one guess at how that goes. Because metal armor apparently doesn't protect against arrows, or swords.

Or take the captured prince, who (by his own statement) has been trained almost from birth in math, geography and what have you – but he doesn't know what soap is, because of course he's an uncultured pig. He's supposed to be stupid enough not to know that you can get a sunburn or heat-stroke.

The Mary Sues do yoga and martial arts, while the moronic white people... don't.

The evil empire (which is never explained or developed, only ever referred to as "The Empire") thinks that the Mary Sues only have women fighters who castrate all of their own men – and of course the evil empire thinks women are stupid, but we're told that female fighters are a rarity among the Mary Sue people?. It's as if the webcomic can't really decide.

This is arguably the greatest sin of this comic: The 'bad guys' are written to be come so incredibly incompetent that they complete fail to be a threat in the comic. A prince who's been trained since childhood to fight with swords? You would think he'd know how to fight, right? And for a culture that knows how to make steel weapons and armor, do in animal husbandry (breed and raise war-horses) and cook up enough industry to make an army with that, would also know what fucking soap is, or that staying out in the desert sun would be bad for you. This is piss poor writing.

But of course, the mary sue people must remain perfect and above such silly things: "Oh we're not enslaving you, we're adopting you – oh, and you're still my man-servant, now do what I tell you" – as if that puts the Mary Sues on some kind of moral high ground.

You get the picture. The maker(s) of this webcomic have made an entire homemade middle-eastern culture from scratch, complete with a homemade language, titles, religion, customs, all that jazz. They have a page on the site for a Cultural Guide – however, at the time of this review, the page is broken. The character page, the about page, and everything other than the archive page and the pages themselves are broken. Not particularly impressive. It certainly doesn't make it easier for anyone to read into this homebrewed race of Mary Sues, though every page does have a glossary of commonly used homemade words that you see in the webcomic. In this sense the homemade language seems completely arbitrary. They might as well have written it in wingdings.

On a sidenote: The reason that the website's broken seems to be because the CMS software used to make the website, Grawlix, is some old discontinued shit that hasn't been updated since early 2019 and isn't being worked on anymore. Basically, they used some janky shit to build their site, and now it's broken beyond repair. Oh, the days of simple HTML.

The writing also bears the hallmarks of the makers of the webcomic not really understanding words. They explain in the glossary the term "Agni" – which is their moonspeak word for "Clan Mother" (oh did we mention that these Mary Sues are of course a Matriarchal society?) – then they note that "Clans are structures with the size and population of a small to medium country." That's not how clans work. As people groups, clans are defined as sub-sets of tribes, or similar groups of people "not large enough to be a tribe". You can have tribe X, made up of clan A, B and C. Many tribes and their territories can then make up a country. But of course, this is the make-believe world of the makers of this webcomic, so who cares what words normally mean, right?

Still, this is all about the overall writing. For the actual dialogue, most of it is reasonably passable, though there are awkward bits, and so much of it is wasted on inane drama that honestly doesn't move the plot along anyway, if we're still to assume that the main plot of the story is that of the adventure and tribulations of prince dumbass.

Since the webcomic's about page didn't work at the time of the review... not much info is available. However, the artist at the very least has linked a [DeviantArt account – there, it's possible to see that she's Polish and has been drawing stuff related to the setting since 2012, five years before the webcomic went online.

However, via a convoluted bit of websluething, a Tumblr blog was found that reveals that there is also someone called Munen involved, who does more in writing and keeping Joolita busy.

So ya, seems we've got a duo – one draws, one does website and writing. Nothing new here.

This webcomic... looks great. It does. Too bad that it's written so incredibly poorly. Of course, how else would Joolita and Mugen be able to demonstrate the amazing superiority of their Mary Sue people?

Honestly, it reminds me a lot of R.H. Junior in a way. You know, a talented artist who makes good-looking webcomics, but gets bogged down in pushing some kind of message. Sure, compared to a lot of other webcomics that this wiki has reviewed where the message was a political or religious one, this is one of the lighter offenders; but nonetheless, it's still not terribly impressive to see these desert people dance around stupid whitey who cannot use soap.