NOTE: This is an old review from our previous wiki. It was was deleted at one point; the details as to why or what state it's supposed to be in have been lost. It will most likely be deleted again because it's not a good review. We've left it online in case something can be salvaged from it provided we decide to have a critical XKCD review on this Wiki. Whether or not XKCD should be reviewed at all is still under discussion.

When I did my review of Cheshire Crossing not long ago, I made a reference to XKCD as having the World's Laziest Cartoonist as its creator and I fucking meant it. Normally, I would not attack XKCD because its writing is passable enough and it does not pander to the bottom of the barrell, like some webcomics out there. However, I lambasted the shit out of Cheshire Crossing for having lousy artwork and passable writing, so XKCD is now fair game.

"XKCD" is a word with no pronunciation. Most folks just spell out the X-K-C-D. It is known around the internet as being the only comic on the web that's more nerd pandery than legendarily nerdy Dresden Codak. It constantly makes reference to obscure math theorems, obscure scientists, and a bunch of emo crap that shows how hard it is to be a man of science in love (awwww...). In fact, it's SO fixated on nerddom, that if anyone ever had a hard time explaining how obnoxious people who claim to "fucking love science" are, they should just point to XKCD and call it a day.

And the whole thing, is brought to you, boys and girls, by

There really is no continuous story to XKCD. This is both a good and a bad thing. On one hand, constantly introducing new, topical material to the reader can be good in keeping things fresh so as not to bog down the piece (but it gets bogged down anyway). On the other hand, with no continuous story, there is no emotional investment. Hell, are there even any characters in this thing? All I've found so far was stick figure guy with a hat, stick figure guy with out a hat, and a smattering of stick figure girls (only discernible by their differences in hair) I don't know these characters' names. I just know they have lots of conversations about the most obscure and pretentious crap ever. I can't identify with these faceless sticks who don't have any real constant stories to tell, other than the fact that they're bored, have trouble relating to each other, and LURVE ALL THINGS SCIENCE!

Like I said, it's the portrait of "science fans".

I wouldn't say there was ever a downfall with XKCD. If nothing else, there's been more of an increase of quality over time. The writing, after about strip 200 or so, gets better. Other than that, the crappy stick figures have been this way since just about the beginning of the strip.

According to the XKCD site, XKCD is written by Randall Munroe, a graduate of CNU and former NASA roboticist. He made the beginnings of XKCD as scribbles in his notebooks while he was in school, and decided to scan them to put on the internet. The first 20 or so strips are evident of this, with their terrible sketchbook look.

I don't think a guy like Randall Munroe meant to be "internet famous" and have his comic get thousands of hits a day. He doesn't strike me as the highly egotistical Ryan Sohmer/Tim Buckley type. I get the idea that he is a science geek who just got lucky. His comic gained in popularity after folks linked to on Digg.com and all the fake science fans of the interwebs finally found someone who spoke to them.

Spoke to them through really, really shitty stick figures.

I don't think he's a bad guy, but I think Munroe is an opportunist to the fullest. Every science type on the internet is sucking this guy's dick for simply putting the word "Fibonacci" in his comics, and he's only happy to take it all in. He receives ad dollars, revenue from merch sales, and undoubtedly money for public appearances. He gets showered in praise and rewards, and all he has to do is put out childish scribbles in order to keep the gravy train going. Choo choo, motherfuckers.

Munroe's work, nay very existence, is a slap in the face to all independent artists who ACTUALLY PUT EFFORT INTO THEIR DRAWINGS and that is very sad. 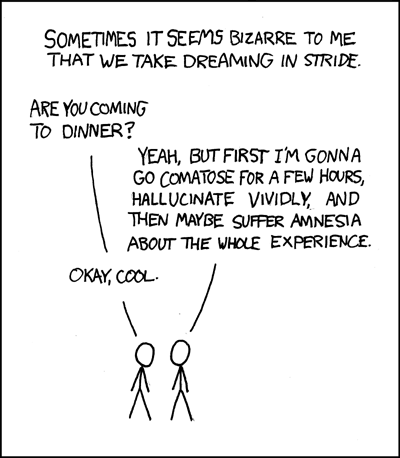 This was lifted from the latest XKCD strip as of this writing. This comic is not popular because of its art, it's popular in spite of it and it shows. I said Randall Munroe was the laziest cartoonist in the world and this is why. A first grader could have drawn that inside of 5 minutes FLAT. Sometimes, Munroe tries to apply ACTUAL CREATIVITY and uses colors or interesting layouts or whatever the hell this is, but for the most part, the art of this comic is stick figures. Fucking. Stick. Figures.

Now I know what most readers are thinking. Something along the lines of, "Oh, cut him some slack, Norad. He's got a technical degree. In PHYSICS! People with technical degrees aren't artists!"

Anybody know a guy named Scott Adams? Yeah, he was an engineer before he was a cartoonist, so shut the fuck up.

Munroe demonstrates a mild ability to draw more than stick figures, but he just doesn't because absolutely no reason to do so (other than out of self-respect as an artist, but it's pretty fucking clear this guy does not consider himself an artist in the very least). He works on XKCD *FULL TIME* and he still doesn't draw more than stick figures. Why's that? All the "science fans" out there are all too happy to haul him up on a pedestal every time he puts out one of his sorry ass stick figure pieces, so, really, Munroe has absolutely no incentive to improve. He sells t-shirts and gets ad dollars on those stick figures alone, so he doesn't have to do one fucking thing differently. It's like getting free money.

However, I'm not here to criticize Munroe's business model. I can't. That shit is rock solid. I am here to rip the hell out of Munroe's complete disregard for art in his comic. Sequential art is a big part of any comic. It's how we identify with the characters and see the world in which they live. It's quite literally the face of any given comic. But XKCD has no face. XKCD only has blank, faceless human forms made compulsively with no love, attachment, or identity.

The first 200 strips are garbage. I went through them meticulously marking all that was wrong with them and they all fit into a few categories: science nerd-sterbation, pretentious science nerd-sterbation, emo whining about relationships, stupid scribbles from his sketchbook days, and shit that should be submissions at emo central itself: PostSecret.com.

Even the material concerning relationships still reeks of the hapless science geek mentality. It's like trying to express romance in the form of an equation. It doesn't fucking work. Any attempt at expressing any sort of emotion in this comic comes off as awkward and whiny. I suppose it's interesting to see a man of science grapple with the one thing in the universe that defies logic and science, and definitely the readers lap up every ounce of it, but that fucking stick figure art kills any emotional attachment I could have with these characters or the situations therein. No, drawing hearts does not fix it, Munroe. Drawing people with faces does. Maybe.

Like I said, this comic is the very picture of "science fandom". XKCD is sooooo fixated with its nerd-groping that nothing else matters. Not the art. Not the characters. Nothing. There are some who say that the art does not matter, and that the writing is powerful enough to carry this comic, but when a creator provides readers with this...

... and calls it a "comic", I'm forced to ask what's the point in making a webcomic if it's all about the words? If you like writing text, Munroe, they have these wacky things called blogs. Keep your text as text and leave the webcomicking to creators who can draw worth a damn.