With that in mind, let me introduce Nivlek by Chris Farrington, or “Kelvin the Lion” as he likes to be called. Excuse me while my eyeballs roll so hard that they fall out of my skull. You see, furry fetishism was just a gateway drug for Chris. The scraggly little spliff behind the bike-sheds. Nothing that anyone but his mother would get worked up about. However, once he learned that there are people that would not only tolerate his other fetishes, but would actively praise him for it, he started hitting the hard stuff until the insides of his nose fell out and not even a doctor could find a good vein! 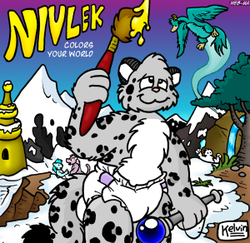 To imply that this mess has a story would be misleading. The word “story” suggests that there's some sort of plot, as opposed to a series of random brain farts Chris uses to shoehorn in his multiple fetishes, which is what this is. The comic revolves around the most blatant self-insertion character ever seen outside of Tim Buckley's skull. “Nivlek” is “Kelvin” backwards you see. Yes, real clever Chris. Using an anadrome of your name is lame enough, but your avatar's? Please.

Anyway, Nivlek is a snow leopard that can make it snow on demand for no apparent reason, and he bumbles though a number of increasingly retarded storylines that Chris probably made up as he went like a fucked up bed-time story. These will likely be about:

Mix that shit in with a load of 80's and 90's references, and you've got this comic!

It would be easy for me to say Nivlek has always sucked because that would be the truth. However, that wouldn't be fair, and besides, I wanted to talk about my theory. Before Nivlek, Chris had drawn a number of other comics, foremost of these being a cute and unimaginatively named furry strip, Macropod Madness. Sure, it had its share of slightly odd storylines, but for the most part, Macropod Madness was nothing horrible that could be read without the reader feeling the need to stab their own eyes out… at first. Even that has suffered the mold of Chris' degradation, although not to the point that Nivlek has. However, he did show a bit of originality once (if you call ripping off reality TV shows original) with another comic 11 Will Die, where Chris bumped off characters at the whim of other artists until there was one left.

No, the rot set in with the creation of that fucking snow leopard. Thanks to furries being a bunch of horrific sycophants to possible producers of wank material, nobody told Chris to stop. If they did, the "troll" would be shouted down by hordes Chris' equally-perverted fans.

I don't know much about Mr Farrington other than he has issues. Many, many, many issues.

If the subject matter wasn't bad enough, the art is the bow tying up this box of shit. While the characters have something resembling human proportions, they all have this weird children's cartoon look to them. That coupled with the content turns the creepy dial up to eleven! To top it all off, the art steadily gets worse. Nivlek starts with full color comic pages with detailed backgrounds. The color doesn't last long, but the full comic pages remain. Over time, the number of panels decreases, and the backgrounds disappear. The characters are also not as well drawn as they once were, and it reeks of laziness.

As I mentioned before, all the stories seem to be made up on the spot to satisfy whatever gets Chris' little solder up that day. This is made obvious by a time travel storyline wherein one of the characters doesn't recognize Nivlek when she was introduced, despite the fact they already met in the past. There was clearly no forward planning involved. All this isn't helped by Chris' lack of writing skill. Now, I'm the last one to criticize a person's writing, but even I know there are things you do not do. In fact, the first page is an itemized list of literary faux pas. He even manages to break the forth wall in the very first panel. Way to go champ!

I honestly don't know what to say. Through all the weirdness, it's not as bad as Kit n' Kay Boodle, and that's not saying much, but that's the most positive thing I can say about this train wreck.