Neokosmos is by far one of the most embarrassing things I have ever read. I didn't say it was the worst thing I ever read, I also didn't say I was embarrassed to read it, I want to make it very clear that this Webcomic should be considered embarrassing on the authors' part.

According to a very reliable source this Webcomic was inspired by some cartoon called Akira, but I've never heard of that before.

It was always bad. I hate to cop out like that. 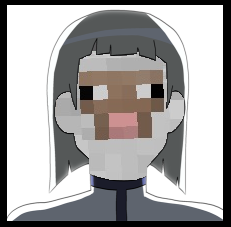 If you thought that Homestuck meets Steven Universe would be too autistic to be true, then get a load of this.

The art in Neokosmos is bad because it was drawn by professional artists who have degrees in art and work professionally as artists. I think the most offensive part is that Shelby can actually draw worth a damn if she really wants to. She's not a master, but that's still better than anything she's making today.

I don't know if it's because they tried to make a panel every day, or if it's because they just didn't care, but the art in Neokosmos is just lazy. There's no tone or shading, which is a poor decision for a story that takes place in a spaceship with dynamic and blinking lights. Yes, there are things going on in most frames, but that doesn't make it complex. Detail in composition doesn't make the frame complex on it's own if it isn't stylistically complex. This conflict of interest makes the composition unclear if any of the detail actually means anything or not. 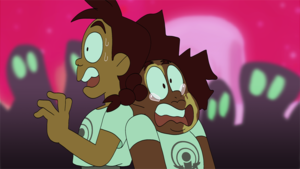 Shelby Cragg is a professional illustrator. She went to a university to learn how to draw. These are the characters she can create.

There is a string of frames from here to here that are visually interesting, even if they don't make sense. These are vibrant in both color and tone. Why can't the rest of the webcomic be more like this?

There are two main characters. Fans, and possibly even the creators, will tell you there's three, but one of these three doesn't physically appear in the webcomic until the very end before the hiatus. The main character is some guy who only accidentally begins the plot, and her friend, who is a short, fat, and annoying elite hacker with mad skill (make the lights flicker) who will to anything to figure out how to open the door. These two have no motivation or stake in any of the outcomes. Then there are these tree people who live upstairs. Their personality is that they are hippies, but also little kids. They are wacky and so random when it comes to saying the words. Then there are aliens, who wear lab coats, and have epic science going on. There's also a giant beetle who has a super rad stick that makes marks on the ground.

Did you know that between these awesome characters and their epic going places, there is an actually interesting character? I even remember his name. It's seven. I don't know why, he isn't the seventh of anything. Seven is mentally disturbed, it's played completely straight, and he has psychic abilities. That's really is an interesting combination, because it means he has to find peace within himself in order to balance his mortal boons. He falls down a hole and never returns.

In the original write-up of this review, I went into a long retelling of the story for no reason. It took more time than I would like to admit, but it wasn't over an hour. That really doesn't do it justice because the plot is bad from a complete conceptual point of view. There is no clear endgame.

There is no way of knowing even from the first one hundred pages how we know when and if the main characters are successful in their journey or not. Which sounds like a minor complaint, but it really kills the Webcomic because nothing else really goes on. Tye just kind of saunters from room to room and makes no headway in finding her friend. I think that was the plot. It can't be exploring the ship because she already knows about the ship. If she doesn't, then why does she know where she is going?

I can't tell why or where this is supposed to go. The webcomic died in the middle of explaining what was going on, so I guess no one will ever know.

The creators behind this webcomic clearly put a lot of effort into designing the characters and the places they go. But it means nothing because it's not clear where they are supposed to be going.

The Webcomic starts out with mountains of text that doesn't explain anything, and dwindles to a few lines every five pages that try to explain what's happening, but doesn't. Your characters and plot mean nothing if you can't integrate them into your story with good writing. The dialogue is color coded, which takes away from the writing, because some colors are harder to read than others.

They are hacks who ape off of their professional work and yet do not understand the appeal of the work they are aping. Shelby has been involved in some weird drama over the past few years, but the extent of the drama is only revealed in pastebin articles and deep lore forum post that you can only find on the waybac, so it's hard to prove any of it.

I really liked how you can flip through the pages with the keyboard arrows. No other Webcomic aside from maybe Jerkcity does this and I like it. Good job.

This webcomic no longer exists as a webcomic and now only exists as a book that you have to pay the authors to read.