This was brought up on the BWW forum, along with several other webcomics. I took it upon myself to cover this one, as it was relatively easy to write a review for it. Plus I always wanted to do a review of a webcomic so horrible that it earns an Atomic Bomb rating. ;)

Can this thing ever go up?

Not applicable, as it is a series of gags.

Rather crude drawings with no shading and inconsistent proportions, with monochrome characters and color on backgrounds and props: 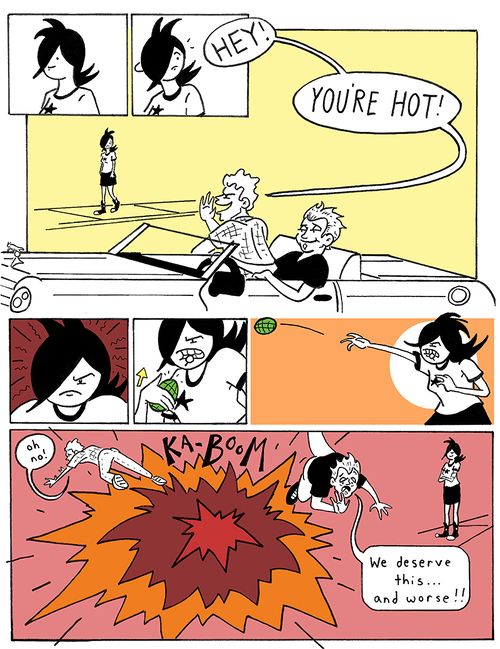 The very first strip...and most of the subsequent ones.

Later on, flesh tone colors would be applied to the characters as well: 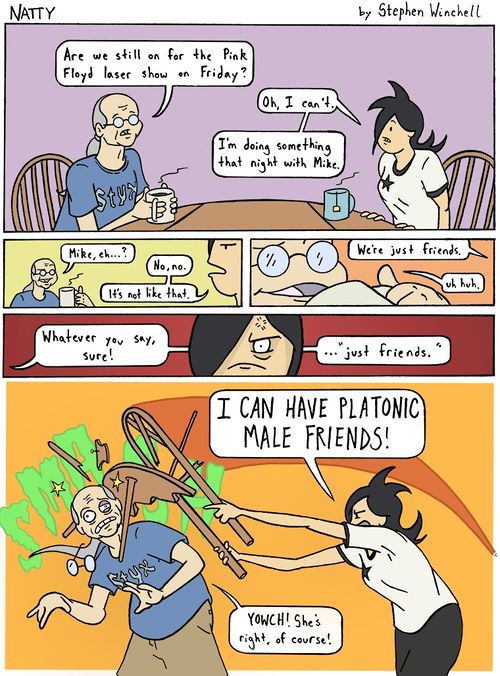 Oftentimes the violence gets more graphic and gruesome; I picked these relatively moderate examples for the purposes of illustration.

As illustrated above, the first strip is about males doing something mildly offensive to the protagonist Natty, then she reacts ultra-violently, and the male says at the end that they deserved her harsh reaction. And what is the second strip? The same thing, only with Natty's sister Honeycomb. The third strip? Natty's hippie father justifying that sort of behavior.

Let's cut to the chase: most strips have this same message. The male character almost always says at the end that he deserved that reaction...assuming he isn't killed outright first. It's the same joke over and over again, and like in the now-vanished Morning Glory, it was shocking the first time, but upon repetition gets very old very fast. But Morning Glory was at least honest about being nothing more than shock entertainment; this webcomic is meant to be a non-ironic morality play.

And how can I be sure about this? There are a number of strips where Natty is talking in all seriousness about numerous celebrities who have done terrible things to women. (Shockingly enough, the author didn't mention Bill Cosby, Garrison Keillor, or Al Franken, all of whom, unlike the ones mentioned, were supposed to have been good moral pillars of society.) Some of these claims are definitely true while the others might be spurious, but that is not the point. The point is that we're supposed to see the protagonists' rude and violent reactions as genuinely morally justified. In other words, if somebody says something you dislike, it's your right to kill or maim them-at least if you're one of the protagonists.

A violent reaction would certainly be justified toward someone who is a genuine danger to you or somebody else. But that was the only example of this that I saw in the entire webcomic. Most of the acts of violence are the result of expressing the wrong opinion or making rude comments or asking discomfiting but legitimate questions or cheering the wrong ball team. In none of those instances could I find violent reactions even remotely justified. You're supposed to sympathize with Natty (or whoever else does this) in the end, but I never did.

The author describes himself and his webcomic. This webcomic looks like it is drawn by a teenage edgelord, but in fact the author is a thirty-one-year-old man. What is his motive for doing this webcomic? Evidently it is to show off what a white knight he is to the world, supposedly standing up for women oppressed and harassed by privileged males. If I were a woman, I would find the author's attitude patronizing.

UPDATE: Recently the author has gotten that idea (see below) and has deleted this webcomic.

What's This About Bugs Bunny?

The author claims in his description of his webcomic that the violence was inspired by professional wrestling and Bugs Bunny.

This actually triggered a discussion on our forum...the part about Bugs Bunny, that is. Unlike the protagonists in this webcomic, Bugs Bunny may use violence at times, but only against those who deserve it, and when it is called for. Situations include when Elmer Fudd, Yosemite Sam, the Tasmanian Devil, Marvin the Martian, or some other villain is trying to do him harm and he has to defend himself. And even then, his method is normally to defeat the villain by escaping or frustrating them rather than killing them. Examples include destroying a robot that Elmer Fudd uses to try to kill him, stealing an explosive device that Marvin the Martian uses to try to destroy Earth, having the train that Yosemite Sam uses to try to run him down end up crashing into a river instead while Bugs makes his getaway, or otherwise convincing the villain to throw in the towel. In one cartoon where Bugs Bunny is insulted when he sees a sign saying "50 cents for a rabbit", he does various bad things until he is pleased to see a sign saying "$1,000,000.00 reward for Bugs Bunny". Then he finds himself in prison and realizes it was not worth it.

A cartoon character far more in line with the webcomic's protagonists, as one commenter pointed out, would be Screwy Squirrel, a 1940's MGM cartoon character who proved to be completely unlikable and was literally killed off after only five cartoons.

Seeing this webcomic does bring to mind the scene in Sabrina Online where Sabrina Skunk's boss Zig Zag hits up on Sabrina and gets punched out for it, and is chastened afterward. Yes, there are women bosses in real life who commit sexual harassment, but we criticized this scene in our review based on the fact that the story went soft on Zig Zag because she was a female with a big bosom, and if a male boss had behaved in the exact same way, he would have been depicted as a definite villain. Yet Zig Zag and Sabrina remain friends in the story afterward, which would be unlikely in real life.

But Sabrina Online was essentially a sitcom and not really meant to be taken seriously. The author of Natty says that his webcomic is neither satirical nor feminist, and the situations where his protagonists act ultra-violently are meant for laughs. Except that I found nothing funny about ultra-violent actions directed toward people simply because they are rude or have the wrong opinions or call a person out on their bad manners. And these people react to this violence directed at them with words of how they deserved it, and it's not even meant to be ironic. Of course in real life, when someone directs violence against someone, that does not convince the victim that they are wrong, but that the person who had directed the violence against them is a psychopath and is the real criminal. Most readers will get the same message too-namely that Natty and her relatives are not fighters for truth and justice, but monsters worse than the people they attack. 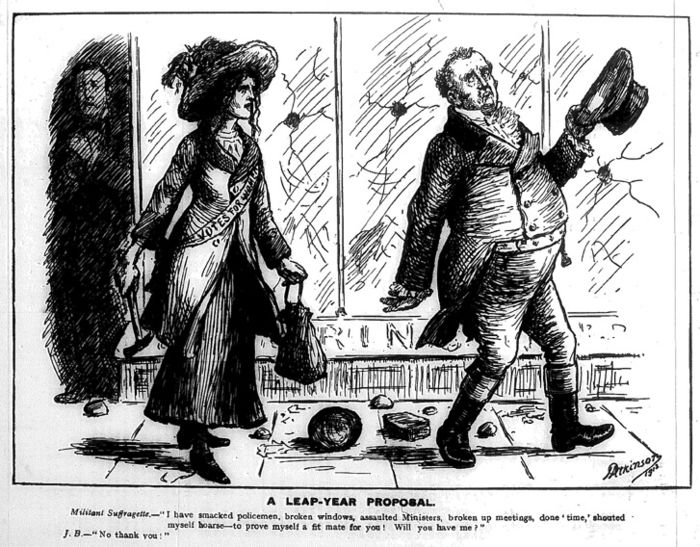 This cartoon was purposely meant to show disdain for militant suffragettes. Stephen Winchell should read this and get a clue.

UPDATE: What Stephen Winchell has recently said on Twitter:

I made a comic called 'Natty' and to be blunt: I never should have & I am deeply sorry for making it. It was never my place to speak for women, I never truly knew the frustrations I would portray in the comic. Sure it was well intentioned, but we all know about the road to hell.

Whatever finally made this person see the light, my heartiest thanks to them. Not only has he stopped this webcomic, he even deleted it. Thus, I gained enough respect for Stephen Winchell so that I decided he no longer deserves the "douche" tag.