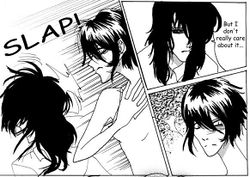 She slapped him so hard she broke his neck and dislocated her shoulder.

This is a webcomic that made me feel somehow nostalgic. In my early years on the internet I was regularly on a large German language Anime and Manga community. And oh boy, I was confronted with crap like this a lot. The amount of 16-year old girls who fall into these kinds of warped rape fantasies keeps you wondering if this is a natural part of puberty, and you pray to all known and unknown deities that they quickly outgrow this phase. Myo Min Myo is a prime example of the levels of wrongness a bad idea like this can grow to.

When I first saw the title I prayed again to all known and unknown deities that this is not a fucked up yaoi-version of the book Mio min Mio by famous Swedish children's book author Astrid Lindgren. But luckily, both works share only the similar title, and Myo Min Myo is just a fucked up yaoi and shota manga.

Actually this comic has three stages of downfall. Stage one was when I first saw the main protagonist and immediately thought to myself: "Hey, this girl looks like the manga version of something I would draw!". Turns out that this "girl" is a man in his late 20s. Big Oops. The second stage was when the comic started exploiting the shit out of a suicide attempt for pity. The third and final stage: The protagonist rapes a homeless kid. 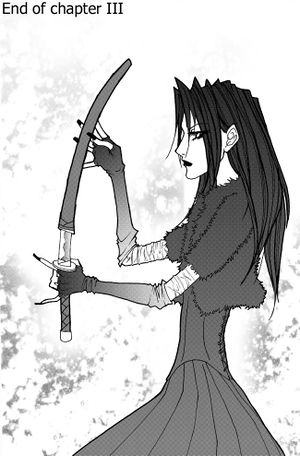 The shortest possible plot synopsis is: Child (or teenager) gets raped by a lunatic fashion designer, weird shit happens, The end. That is actually all that happens in the webcomic, but I'll try a more detailed synopsis:

The plot takes place in magical wonderland of Tokyo. As we all know, Japan just consists of Tokyo. We meet "Manabou", a psychotic fashion-designer who decides it would be a fancy idea to commit suicide during his fashion show. Yep, the anorectic bleeding woman is in fact a man nearing thirty. We swiftly move on to the next, very important place in a yaoi-manga: The hospital. Or so we are told. It doesn't really look like a hospital. Actually, it doesn't really look like anything. This "Hospital" is nothing but an empty room with a bed and a coat hanger.

Despite the fact that he tried to commit suicide, Mana gets quickly and easily released from the ICU. He wanders the streets of Tokyo, where everyone seems to be high on crack, and there he meets his future victim lover, "Myo". Myo happens to be a contortionist (check the corresponding square in your sexual fantasy bingo sheet) with the amazing ability to break his spine and arm in at least three different places at once without screaming in pain. Just have a look at these two examples to see what is wrong with the anatomy.

The stupid story in short goes like this: Myo happens to also be your run of the mill uke, who is a bit... naive, trusting and just plain puppy-eye stupid. Myo follows Mana to his home where he is boozed-up by Mana and left in Mana's bedroom. Mana is acting weird and showing the paaaaainful scars of this past. Oh, and then... 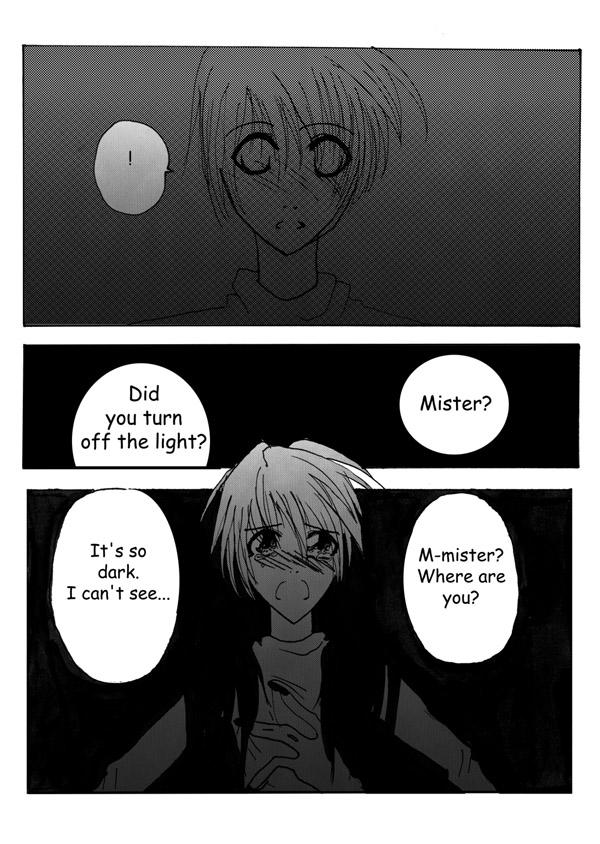 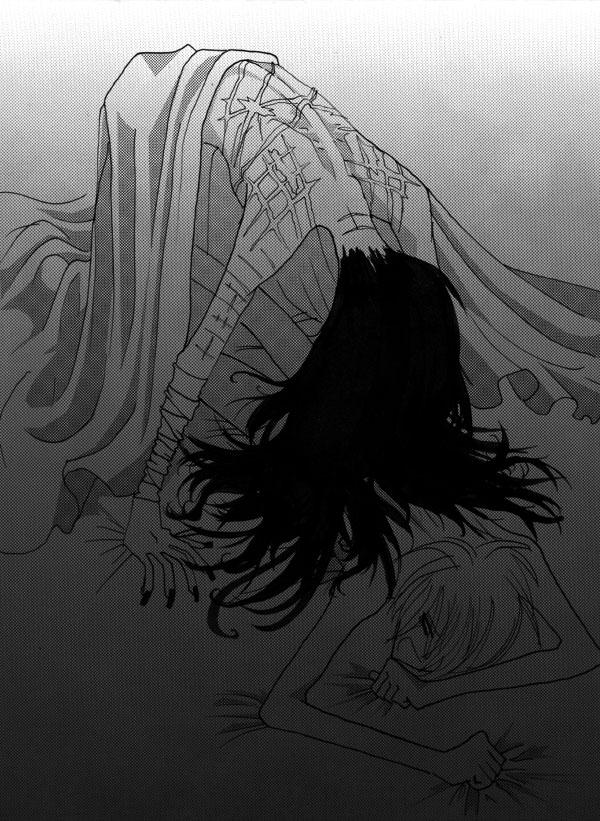 So, this is the basic set up for the story: Mentally fucked up (I have the feeling I will use this term a lot in this review) cross-dressing, katana-wielding fashion designer and pedophile rapes a beggar/teenager who for all he knows is homeless (it seems like it at first and I think that's actually what is was originally meant to be) and then falls in love with him or something... I don't know; The webmanga has 159 pages in 6 chapters and you never get the feeling that Mana really cares about Myo in any way. But even if he did, the premise would only be even more sick.

In the following chapters, we see:

Seriously, read this page. It is hilarious. 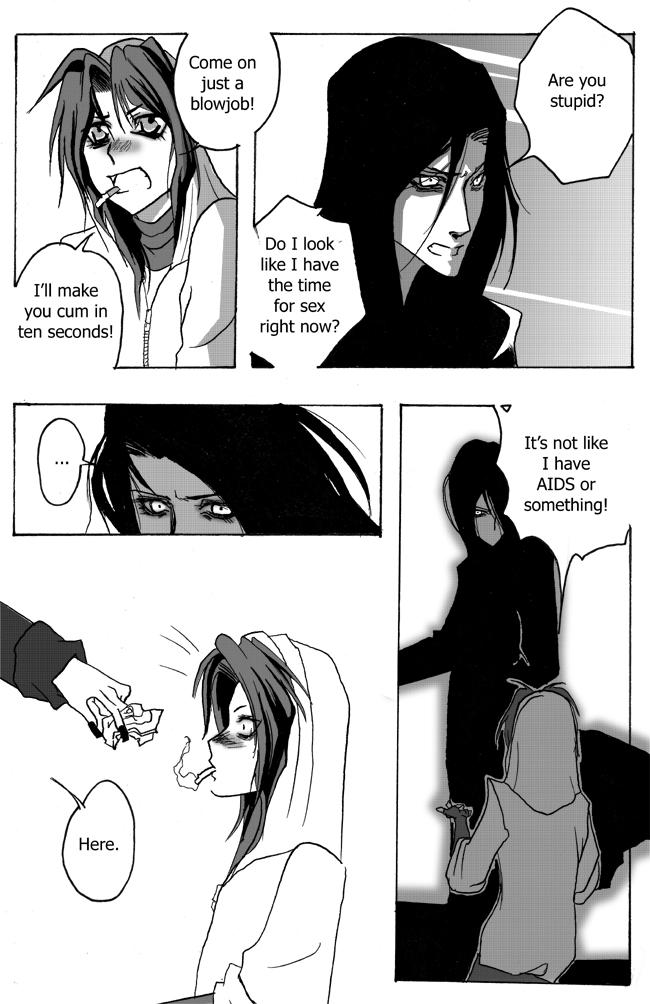 Actually, I can summarize the entire comic in one paragraph:

The story is about a cross-dressing, self-mutilating, anorexic, katana-wielding, pedophile fashion designer and suicide risk who, on his way home, sees a little boy contortionist who is begging for money on the street, so he takes him home and rapes him. Then the boy gets beat up on the street, so the guy takes him home and tells him that if he doesn't go to school he will rape him again. Then he meets his pop star cousin whom he raped and almost killed in the past who tries to rape him back for revenge. Then the guy goes outside and pays another little boy to suck his dick and beats a teen-aged girl while the first little boy he raped meets some criminal on the street who is about to rape him again.

Or, an even shorter summary:

This is his "Rape Me" pose.

I already mentioned some of the major flaws in the plot synopsis: firstly, you can't tell the genders apart. Okay, you can argue that Mana is a cross-dresser, but cross-dressers are not transsexuals. So Mana should still look like a male under his makeup and evening gown. And another great and obvious flaw: the faces all look alike. The male faces are a bit longer than the female faces and have smaller eyes. Still, the only real differences between people are their hairstyles or accessories.

Mirre's art style has some appeal. There are some panels I actually liked, specifically those where she drew costumes. And she actually has a nice grip on black and white art. But when it comes to everything else she seems to totally fall apart. She didn't bother to draw houses, buildings or backgrounds at all. Perspective wasn't friends with her either. It is all just so god-damn lazy and lumpy. She even smashed her lumpy drawings together with photo backgrounds of random skyscrapers.

Actually, she also makes all the mistakes that professionally drawn mangas make: wonky anatomy, same face syndrome, lumpy backgrounds if any at all, traced photos for backgrounds and almost female-looking men. And, to be honest, I can't blame her for that. She was sixteen when she started the comic and she just took poorly drawn professional manga as a blueprint for her own webcomic, warts and all. Which, in her inexperienced hands, multiplied to a parodic degree. I could almost say it's the fault of the manga industry that churns out lazy crap into the market that causes us to end up with trash like this. Almost.

Other flaws include: Broken anatomy, lanky limbs that look like everyone in the cast is related to slender-man, use of dramatic effects to be lazy and just having a laughably flawed, derivative manga style that looks like it was drawn by a sixteen year-old... which it was. 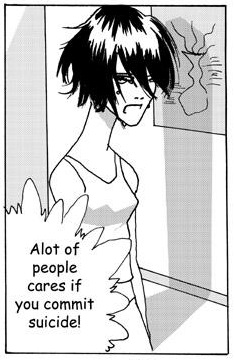 What else can I say about the writing which hasn't already been pointed in the downfall and the plot synopsis? It is horrendous, illogical and even offensive. The characters are just cliché-ridden cardboard cut-outs. Mana is the tormented psycho-emo-asshole-trans-seme-bishie, and Myo is the puppy-eyed-naive-misery-rape-victim-uke-bishie. That's it. And the supporting characters are nothing but that, supporting characters. The same way a beam supports a house or the wall of an ally supports a tired crack-whore. Nothing more to say about them. The only character halfway interesting in my opinion is Kana, the girlfriend of Myo's brother and model who gets abused on the stage by Mana. And I lean pretty wide out of the window when I say that it might have been a more interesting story if it was told from her perspective. Watching how the little brother of her boyfriend slides into an abusive relationship with a psychotic asshole who also happens to be her boss. This would have been kind of interesting. But nooooo, that would haven't been creepy lovely-dovely rape-love story anymore!!!

As I said, the story is what you can expect when a 16-year old girl who has basically no idea what she is writing about is the author. Here are a couple of descriptions of the comic that she wrote:

The story about a celebrity that tries to kill himself, instead he finds the luck by falling in love with a young boy. Warning: Contains shota and other materials that some readers may find offensive.
I am currently 19 years old and been working with onlinecomics since I was 14, but Myo Min Myo is the only one that I haven't lost my interest in doing. I have always loved stories that are dark, and with Myo Min Myo I wan't to break this shota/yaoi-vision that's so unnatural and instead, show a more depressive version than just sparkling eyes and soft gay porn.

Well sweetie, you have certainly succeeded in your goal. Sadly, the result was fucking awful. In her attempt to create something dark and brooding she created something ridiculous. She went too far in focusing on topics like rape, pedophilia, suicide, depression, self-mutilation, anorexia, incest and so on, making the comic disgusting instead of depressing. She combined that with bad art, no pacing and awful English to make it hilarious instead of engaging. And yes, as you may have noticed from the quotes, her English is atrocious. She can't spell, her grammar is a joke and her dialog is forced and unnatural. On one hand, it isn't her fault since English his not her first language. However, knowing that this is the case, she should have had someone proof-read her work before posting it, so really, it's still her fault. In the end, reading someone agonize over his depression in comic sans, using the wording of a Ukrainian immigrant, as he sheds a tear from his oversize animu-eyes is anything but moving.

The comic is a prime example of what is wrong with certain parts of the manga industry and how it can influence their fans. Luckily, the author seems to have figured out herself that her story goes nowhere and stopped.

But, unlike other reviews on this site, I am delighted to say that this one has a happy ending.

This review was never finished by its original author so I recently came back to put some finishing touches on it and publish it. I looked to see if the comic had updated since I last checked it, and when I saw that it hasn't, I moved on to the artist's DA page to see it there is any more of it there. But lo and behold what awaited me there.

In the years since Myo Min Myo's abrupt ending the artist has been hard at work at improving her craft. She has all but abandoned her old Anime-inspired style for a more realistic one and now produces almost professional level art. Here, look at it-

Check this fly shit out 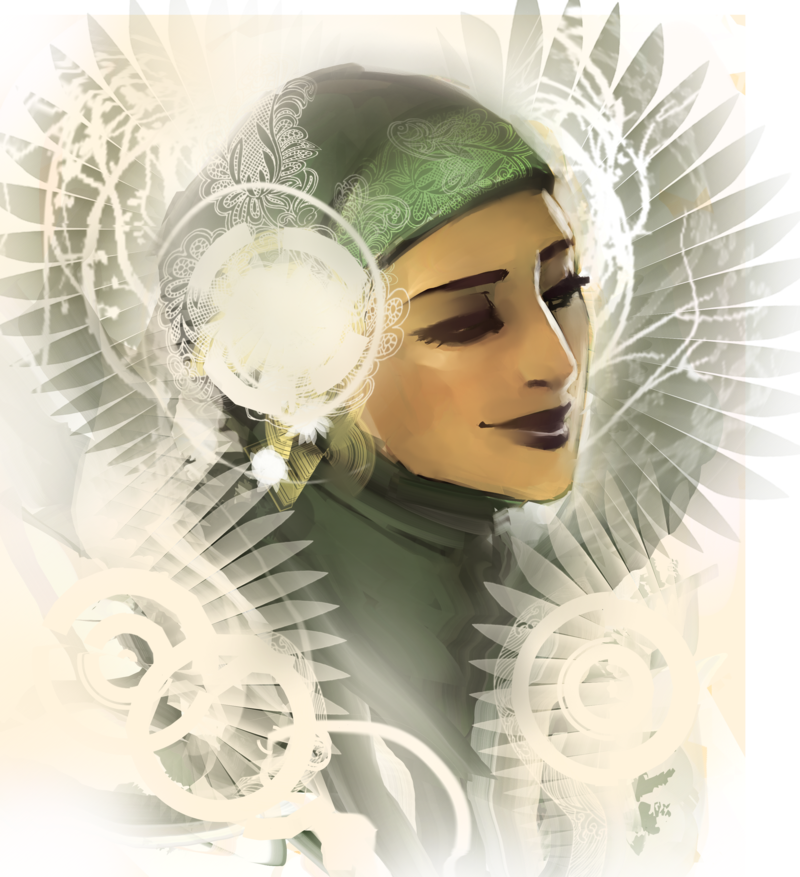 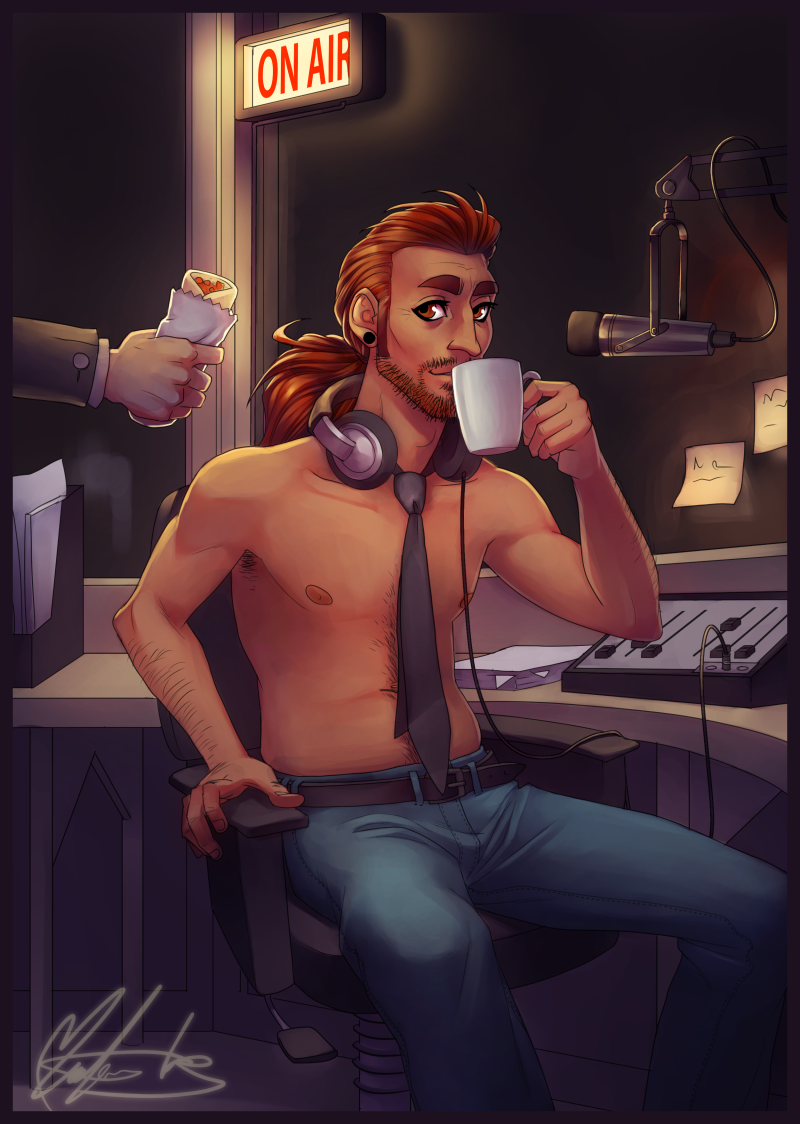 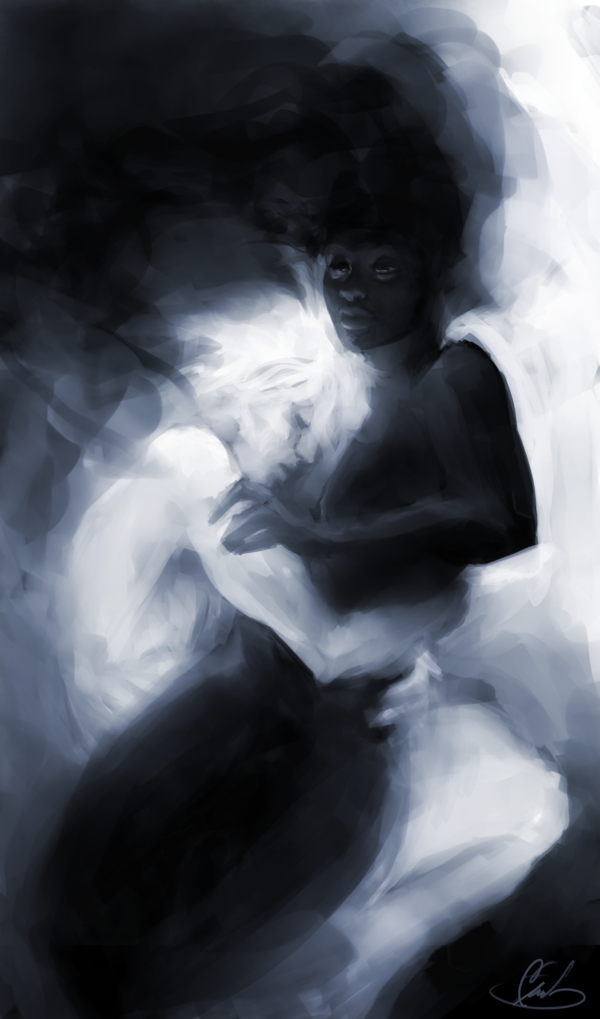 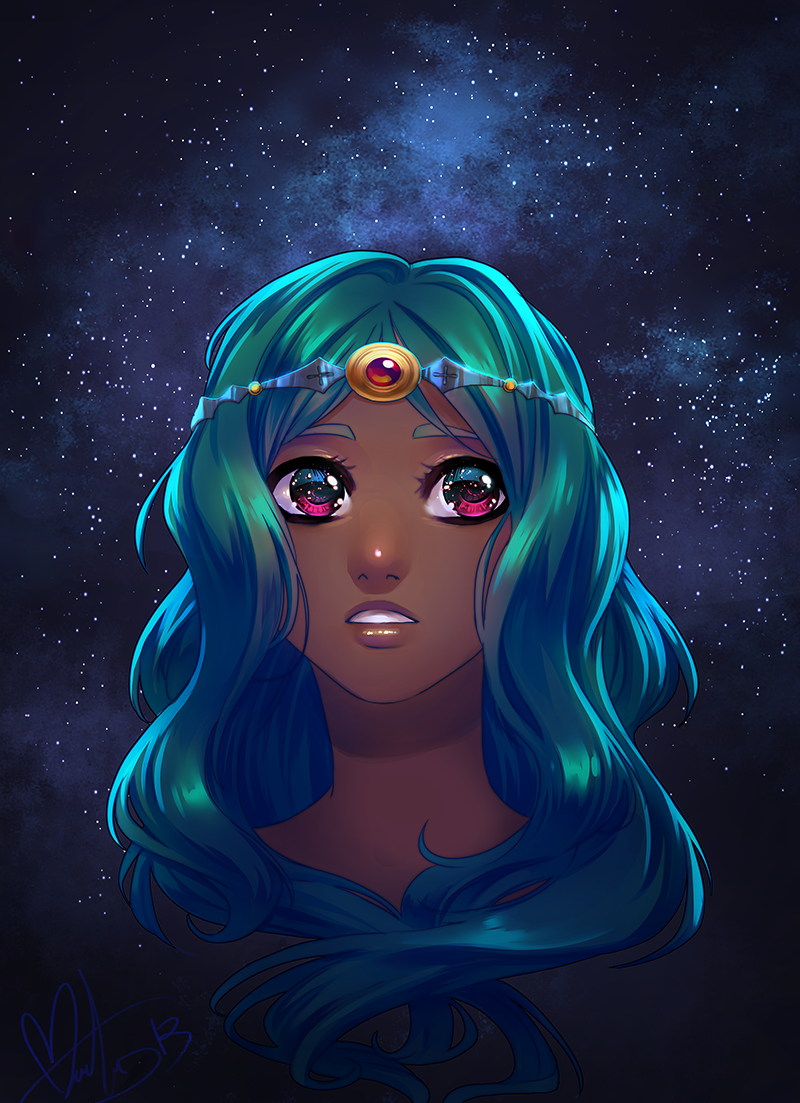 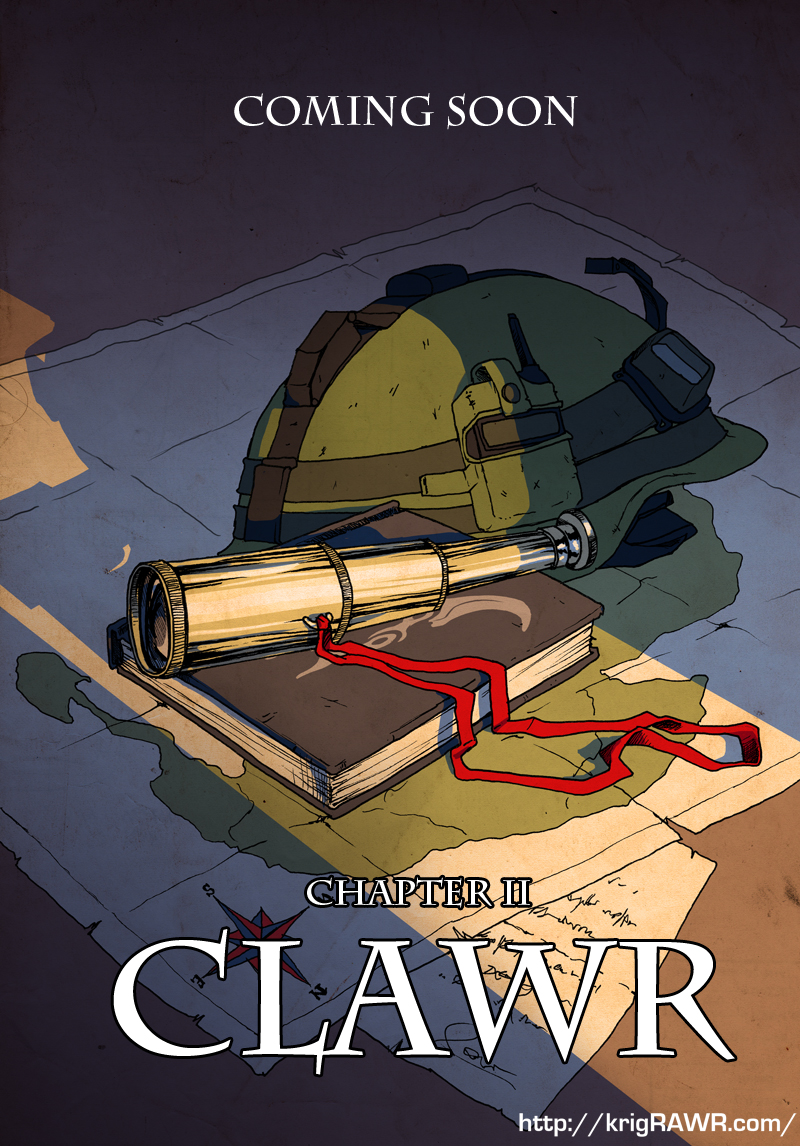 It really warms my heart to see this kind of stuff. It proves that, with a little hard work, anyone can improve. And it doesn't take decades either. This person went from making one of the most ugly, most disgustingly stupid and offensive comics I have ever seen in 2011, to being a real, talented and versatile artist by 2013 that most of our review subjects can only aspire to resemble.

Just compare that to someone like Tom Preston or anyone else we have reviewed here. Look at them as they stagnate, year after year, brushing off criticism and making up more excuses about why they can't, shouldn't or don't have to improve their art.

So, in case she ever stumbles upon this review, I would just like to say:
Good job Mirjam! I wish you luck in the future and hope that you never, EVER try your hand at writing another yaoi story.

And thank you to whoever deleted this abomination.