My life with Fel

OK, first of all, this comic is hosted by Smackjeeves. Whoever thought a hosting site without any preliminary quality control would be a good idea? Oh, yeah, suits bent on more ad revenue. Moving on...

As far as we're concerned, this comic is slowly turning ever more popular amongst furries. Of course, we here at the BWW don't believe in proportional correlation between the quality of a work and the size of its fanbase; more often than not that just means it has something people either can fap well to or are into generally. MLWF is no exception to the rule, indeed, it has a lot of FM junk so a team-up with already known franchises such as the ones of the Katbox wouldn't surprise me.

Originally I found this at DA and thought of it as the work of a really, really talented person with much to share with the world. And he was Mexican, so the kinship also helped a lot in my expectations from this guy.

In this webcomic, we're introduced to a oh sex-ay :D~, genetically-enhanced, half-tiger girl name Fel, and her deplorable lover-manchild. It's not until the second chapter where we're getting offered something that can be called a plot. Fel is the result of the latest undercover gub'mint experiments at genetics. She was made for only one purpose: to be sold as the brand new super soldier of the future. And all that in the late noughties. Whatever. After this vestige of plot, which happens to be after a tiring toilet humor and fanservice chapter, we're still stuck with a comic which promises more than it can actually do.

There's nothing to object to here. Indeed, the art is this comic's (sadly sole) highpoint. Fernández is no noob smearing some doodles on paper and scanning them in. There's polished anatomy, experimenting with different, diverse styles in individual strips and other nifty stuff. Just look at this. He's a very talented artist with a lots of potential. Unfortunately he's utterly wasting it on hollow softcore comics. 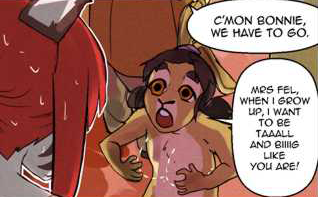 "I want to be a good little wife-slave with fat jugs, cook and clean for a Man-God Master of my own as well as please every and all sexual wishes of his when I grow up, like every woman should be and do. Because otherwise I will be culled."

Let's see. Fap material? Check. Trifling Internet memes? Check. And that's about it what this comic has to offer. Not that this gets less annoying or wins on variety as it continues. This in itself makes some pretty bad entertainment, but it's aggravated by the fact the author and the male main character share a lot of visual traits, giving the impression MLWF is unadulterated self-insert wish fulfillment. That in turn means Fernández essentially created an imaginary girlfriend for himself, which is quite worrying from the real life perspective and even more so if you publish, brag about and finally want people to pay for it.

That Comic!Fernández is an A-grade Gary Stu goes without saying.

The second sin is the endless resort to shallow pop culture references and Internet memes in lieu of actual jokes.

One is drawn to the conclusion that Fernández has no clue about how to write humorously (or at all) as every single of his attempts at jokes consists of pandering to some subculture via references. He doesn't really try. It's a ref you already know from somewhere else, and this guy hopes you like this just because it's the same motherfucking thing repeated just with different characters. AARGH.

Lastly, Fel and, come to think of it, everybody else aren't characters rather than cardboard cutouts. She, for instance, is nothing but a living sex doll for Comic!Fernández. Indeed, she's as willing as the normal plastic variety Fel what with her only worry and ambition in life is to serve as a good fuck for Comic!Fernández. Makes you wonder if Fernández ever had deeper (as in profound, get your mind out of the gutter) interaction with women.

"Dios mio, the Internet killed all my girlfriends!"

Since the day she got her ass handed to her and had to hide in his garbage dumper she's his unconditional sex toy for the rest of her life. Then again, if someone heals you with his God Sue miracle powers the spark of love may kindle, but that doesn't exactly make a good read.

Edit 2013: It seems like the plot has leaned more towards story-telling than simply referencing internet memes at the turn of a hat. Though, the plot still has several flaws, such as a proper definition of what is happening, or contribed conceptions about diverse subjects such as real life, or sexuality. So far, the references have been reduced, and the author has focused more on plot development in the last months.

If you check them, he pretty much tries to develop characters by simply showing us how is a normal day for each of them. To be frank, that doesn't help us understand the character besides his jobs, and hobbies. Which, can be very one-dimensional, and pretty much covered in a single paragraph in an "About Cast" page. One example is the gay dude's page, which if the guy is not your archetypical gay perv by night, he lives a "double" life as a family doctor...I think it's a family doctor. But it stops there. Who is really him, how did he got there, what are his motivations for life, etcetera, etcetera, etcetera, is pretty much absent.

Indeed, only one of the characters actually got a factual character development, but ONLY because she got featured in several DIFFERENT activities alongside OTHER characters in SEVERAL pages. The fox girl is shown to have some sort of crush, or admiration, for goddam-sweet tits...sorry, the raccoon girl because she (take note): shares similar hobbies, similar traits, AND there was an archetypical childhood incident with Damngood Gazoongas raccoon girl which marked her just like in any anime at hand. Only one, out of a bunch of characters, some of which are ascended extras we never paid attention to, or give a fuck about.

That's not character development. He just accidentally got only one character's CD right. And it was accidental. Take that for granted.

Hmm, where did I see this face before?

Alonso Fernández AKA "Kenno Arkkan" is a 20 year old student of graphic design from Jalisco, Mexico. Well, and webcomicker. Duh.

Update: So, recently, Mister Ahmehkmahowngurlfwends decided it was time to milk his fans in a more direct, and totally not so romantic way via e-begging...Ehrm, uh "Patreon". To be honest, the rewards he's offering for a considerable amount of money is not really worth anyone's money. Look, concept art, is nice, and a whole book made of it is nicer. But paying almost the full price for a artbook is not worth it. Specially if it's accessible through a private blog. ALSO, and more importantly is his promise of "artistic advice" for paying almost the full price for actual lessons.

Mr. Fernández is a young man with amazing prowess and potential...

...that is amazingly misspent on My Life With Fel. web This comic's an utter waste of time and talent for him. Reading through it makes clear he's regrettably lacking in the writing department as his humor is neither creative nor original. However, as an illustrator he can be very competent and successful.

Of course, a webcomic's fanbase is a potent brainwashing tool which can turn all its believers (what also include sufficiently self-absorbed creators) into arrogant junkies with their heads so deep into their own crotches that they don't realize what is actually going on in the real world.

Let's hope Mr. Alonso realizes this soon and starts making something worthwhile with his actual talents.

UPDATE: Smackjeeves has been shut down, and this webcomic was wiped along with it. UPDATE UPDATE: It has its own website now LINK UPDATE UPDATE UPDATE: In 2022 it finally hit its Epiloque art, hinting that the comic might come to an end