This webcomic was listed on the to-be-reviewed section of the BWW forum. Easy to see why.

Go, the title character, is stranded in a desert, but he is discovered and retrieved by a ship known as "The Chainless". So what will the ship's crew do with Go? And what sort of ship is it anyway? An ugly fucking ship, that's for sure.

But just as Go attempts to remember what had happened to him beforehand, he finds himself being chased by some guy with a chainsaw. Is this comedy? Action? I have no idea because it fails so spectacularly at both. However, Go finds a weapon with which to defend himself, and utilizes it by... Setting his arms on fire? Then the fight is called off because it was all part of a test that happened because the writer obviously didn't plan the plot ahead. And Go is patched up, and after he got to display what a "badass" he is (if your idea of cool is the same as that of a 13-year-old), they agree to let him join the crew.

So what's next for our heroes? And what sort of people are they, anyway? "Nothing interesting" and "The typical assortment of obnoxious 'wacky' characters".

They plot to loot an abandoned laboratory for whatever salable secrets it might contain. Unfortunately this mission starts out unpleasantly when they find everyone there dead, and soon turns worse when they are attacked by some more Mario characters that have undergone a cringe-inducing attempt to make them look cool and edgy. Whoa, what has everyone gotten themselves into? They've gotten into a conflict with a megalomaniac plant creature who had lured "The Chainless" to the laboratory with the intention of escaping the desert. Fortunately, our heroes manage to destroy the creature and even refuse to take anything from the laboratory and let it burn up completely, not willing to unleash the dangers it had contained out into the world.

The crew are back aboard "The Chainless", though Go learns that none of the crew actually understands how the ship works.

Interesting, right? Not really. Maybe if it was written by someone with a speck of skill. But it wasn't.

Their next destination is the desert city of Twisters Borough, but the city's law enforcement division are not pleased to see them again. Nevertheless, they are permitted to enter anyway. So do our heroes enjoy the visit? Surprise, surprise, trouble awaits them. At a bar, Captain Mortello talks about her childhood, and how she ended up being a pirate ship captain. But before any more reminiscing can occur, all of a sudden the trouble starts! Said trouble comes from opportunist thugs looking for fame and fortune, but our heroes show them a thing or two (mostly more macho posturing), and the thugs back off. Our heroes depart... but a previously unknown enemy is found to be after them.

This time our heroes visit a fortress where a faction of warriors from a Koopa army (pink bob-ombs, as it turns out) had been hiding out, wishing freedom from their military duties (The consequence of smart bombs being too smart!). The pink bob-ombs' former masters have just arrived to retrieve them, but our heroes fight them off. Then McCoy takes a respite to tell Go the story about how he happened to come upon Shyguy and ended up raising him. Black bob-ombs arrive to capture them, and the king bob-omb tries to negotiate with Mortello. The king tells her that he could have deserted as well, but chose not to, and he scorns the idea of bob-ombs desiring freedom, as their kind were created specifically as fighting machines with no other reason to exist. In spite of this argument, our heroes still choose to deactivate the bob-omb king, and as it turns out, Shyguy had not been merely sitting on the sidelines and in fact proves ultimately crucial in defeating the king.

The other pink bob-ombs mourn the one who sacrificed himself, but as it turns out, the bob-omb has been reincarnated thanks to our heroes' bravery and cleverness (can you say "deus ex machina"?). A happy ending? Nope, a new enemy arrives and joins forces with the one from before.

Our heroes now go to a go-kart race. Before it begins, Go tells Palma the story of his romance with Blair and why it ultimately failed. Uh-oh, here come our heroes' enemies! Detective Jack Fabes intends to arrest Sasha Martello for her past crimes while she was part of a gang of vicious brigands (prior to being captain of "The Chainless"), while the ex-bob-omb king wants to make good by retrieving Palma and Go from the "Chainless" crew, while the third enemy has a less-defined feud with McCoy. So now what is this all about? No matter, shortly afterward, the story abruptly ends for good. The author describes his or her original intention for the storyline, but has decided not to bother finishing it.

An action scene-or rather a sad attempt at one.

Morgenstern first tried to draw the webcomic on his or her own. This was the result. Scribbly thick outline drawings with crude colors and some shading. Many pictures depict motion, but everything is absolutely stiff. 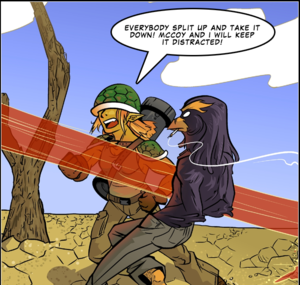 After realizing he or she couldn't draw, Morgenstern hired someone called "Obfuscobble" to do this webcomic's artwork for a period of time. This was obviously far better than the original, and mostly made me sad that it was being wasted on such a stupid webcomic. 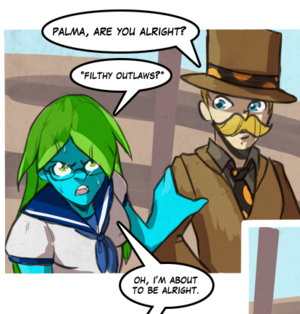 Eventually another artist called "Thedandmom" took over, who was not as good as the previous artist, but still far better than Morgenstern.

In the "Reactions" section (link above), the author proclaimed that this webcomic had the potential to become "big-big", which presumably was the reason he or she eventually hired talented artists to take on the art duties. But this webcomic is so fundamentally stupid it would never have made it big, let alone "big-big", even if Morgenstern had hired Rembrandt to illustrate it.

With the oddball assortment of characters the story started out with, I was expecting a humorous adventure. That probably had been the original intention, especially when the characters' speech balloons had been originally tagged with corresponding Nintendo symbols (a mushroom icon for Go's dialogue, for example), though that was later dropped. But evidently in mid-stream, Morgenstern decided to change his or her mind and play the whole thing straight after all-which doesn't exactly work when you are using characters plucked from a video game series.

But let's say we disregard the scenario's basic absurdity and view the writing on its own merits. Basically, I got the impression that the author was making things up as he or she went along, and pacing and events are erratic. The author admitted in his or her comments beneath each strip that real-life matters were getting in the way and things had to be delayed or rushed accordingly. In the end, the author indicated that he or she came up with a defined storyline with a definite conclusion, but had decided not to bother going through with it. All things considered, who could blame Morgenstern for this decision?

If there were any links that said anything about this webcomic's author, they are gone.

First, let me acknowledge that my familiarity with Nintendo is limited. I know the old Mario Brothers and Super Mario Brothers games, but do not know a whole lot about Nintendo games otherwise. I had to consult the Mario Wiki to get a little more information on the basis for this webcomic. And after doing so, I had to wonder just what had been Morgenstern's big idea in the first place.

Let's take Go, the webcomic's title character, who is identified as a Toad. And what is a Toad in the Nintendo scenario? This. A species of people who either have mushroom head covers as part of their anatomy or simply wear mushroom hats. In the case of this webcomic, Go's mushroom top is simply a hat, as he is shown wearing other types of hats in the story (illustrated above).

And what about Captain Sasha Martello, who is identified as a Koopa? She isn't anything like any sort of Koopa according to the wiki I read, but is instead a humanoid woman with pointed ears who is in fact wearing a Koopa-style helmet. She is really a Koopa in name only and looks more like poorly thought out eye candy than she does anything else. One would get the impression that Mortello would at least be reptilian like the Nintendo Koopas, considering... 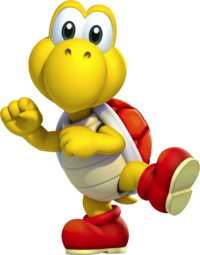 ...that McCoy is identified as a Raven, and from all indications he is an actual avian character and not, say, someone in an outfit. He even has bird feet that look and grasp like bird feet.

Next, we come to Shyguy (who has no other identification in this webcomic). There is a running joke about whatever is behind Shyguy's mask-but we never see Shyguy without the mask.

Whoever and whatever Palma is supposed to be I can't tell you. I could find nothing in the Mario Wiki that looks like her to me so some bigger fanboy will have to let me in on the secret. (Fanboy's Note: Since you asked so nicely, Palma is most likely based on the Pianta from Super Mario Sunshine. The blue skin, the green hair and grass skirt all seem to fit the description of a Pianta. Not a perfect fit, but hey, who is in this comic?)

Other video game-based webcomics listed here, such as Press Start To Play and Ask Altair, were meant to be humorous (they failed, but still). But Mushroom Go, if it were ever meant to be humorous, it's so unfunny that I can't even be sure if it was ever the case. When you take a look at the main cast described above... how is it possible to take a story with these characters even remotely seriously? One is reminded of Jack, which uses silly cartoon animals to convey deep and meaningful stories (or so David thinks, anyway), and this idea has been shown here to be just plain ridiculous. Mushroom Go may not have had such pretensions, but it has the same flaw of trying to make serious entertainment using inherently non-serious material. It just doesn't work. Most of all this webcomic reminds me of any number of Sonic the Hedgehog I've seen on DeviantArt, populated by trying-too-hard-to-be-dark-and-edgy recolors made by 13-year-olds.

Even if you're a big-time Nintendo fan, give this webcomic a miss. Play with your Wii instead (no pun intended). Hell, play with anything else at all. There are a million better things to do than waste time on this crapola.