Remember the 'shock jock' explosion of the 90s? Those guys took over the airwaves late at night and aimed to offend the most people possible by making edgy jokes about popular culture and yelling their opinion the loudest they could. They were the IRL trolls of their day. The main jokes were occasionally funny just because of how blatantly gross they were, but the part you mainly tuned in for was the hate mail section. The people who took the shows seriously were even more obnoxious than the hosts. Now imagine someone is still doing this today, on the Internet…with gruesome illustrations…..and he thinks the bad jokes are the best part. I'll bet you thought those shows were harmless.

Thank you MachChunk for that intro, and thank you for having recently stumbled upon this rather lovely gem. You see, he wanted somebody with some extravagant style and grace to write a review. Unfortunately that certain somebody has yet to arrive, so instead you got me reading this! SO THANK YOU SO MUCH FOR LETTING ME REVIEW THIS!! >:O This comic is fairly short and consists mainly of 1 panel gags, but that still don't make it any easier to read. Most if not all of the time we're treated to sex puns, toilet humor, and puns... DEAR GOD THERE'S NOTHING BUT PUNS HERE!! The writer however often states that "Morning Squirtz" is "The thinking man's fart joke", but of course you need the brain skills of a 5-year-old and up to understand anything here he has to offer. "Tee hee! He farted. Oh look, now he's taking a poo!" As for the downfall of this fine comic... the first comic here. 'Nuff said.

Lemme just say that there is no story, there is no plot either, it's puns stacked upon more puns! We've got puns like The EX Men, a literal pooper at a party, and ...dear sweet Christ... I'm going to try to limit the number of links here folks as this stuff is vile and the creators are damned proud of it (I'll get to them later). There's nothing here worth reading if you're looking for something intelligent, no plot, no story, not even some character development! It's just horribly made puns piled on top of human waste, literally! 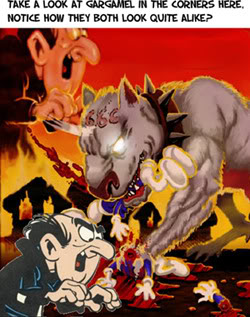 Here's something I can really get in depth with, and I am going to post examples so fairly warned be ye says I! OK, let's start with one of his more recent ones here. Excuse me for a moment while I catch my breath here as this is making me want to vomit. Aside from being blatant furry pornography involving classic cartoon characters; the art is muddy as the bottom of a river and just as ugly. The artist here seems to know a little bit about form and shading/lighting, but his figures are still lifeless and stiff. This is the anatomy you'd expect from a Barbie or a Ken Doll, and the coloring skills of a 15 year old who has just discovered Photoshop. Let's also not forget his facial anatomy in those last examples. Even when he's making puns involving cartoon characters it's completely half assed. That or he's secretly a tracer. Actually, scratch that, he is a tracer as you can see the image to the right here. You know... it doesn't take a lot of skill to trace something and color it differently, in fact it's downright easy considering what you can do with photoshop, for all I know he did exactly what I did there only he painted over the image there. It wasn't even a challenge for me to do that, so it goes to show how much effort is needed to make these comics. In the end however, when it comes down to things like drawing proper anatomy, the artist fails spectacularly as his women look like all their internal organs are about to be violently expelled from their mouths and/or bowels (I suspect the latter in the case of this comic), his males look like robots made from silly putty, and everything else looks like it might of accidentally been used for toilet paper.

The pathetic thing is that he can put a lot more effort into his work, but he won't, and even his best still looks pretty awful. Part of the problem also lies in the content of the comics where the artist has to draw the writer's sick imagination of toilet humor, the drawing of turds is hardly the thing of legends, but what's really interesting is that often at times the comic panel is animated. Albeit they are very poorly animated, often at times the only animation is a flashing glowing background, and again this "talent" wasted on this crude and disgusting humor.

The writer is damned proud of his pile of shit, but really he shouldn't be as his writing is downright juvenile and unintelligent. No more links to "Morning Squirtz" BTW as what I've posted here should have already given you a good idea of what to expect. Although I'll give you a short list of what you can find.

It's a treasure trove of pure unadulterated shit that's fueled by pure egotism and the desire to be more popular than the other guy (whoever that may be). Again like in my review of "Awful" this is all shock and awe comedy, only it starts to lose it's appeal after strip #2 which to Awful's credit took several more strips to get to that point. Danny boy here is (literally) throwing shit at the wall and hopeful that something sticks. The end result however is a daily dose of "Morning Squirtz" which I take is a term for chronic diarrhea and that seems to be a serious medical condition.

The writer of this comic has an ego to match even the most horrible comic artists out there. He's often spotted on a lot of forums and communities plugging his shit wherever he may go. Now... I will admit that sometimes if you want to have your comic noticed, you'll go out and show the world your work, but that's a total risk as often at times people don't like it when you set yourself up as a whore. However people can be forgiving and after a stern warning they can offer their opinions and some advice should they not like what you've got. Our friend Dan however is as thick as a cement block wrapped in a delicious adamantium and diamond coating, normally a good comic artist will respond to people with open minds and a polite demeanor. Dan however has this response for his critics:

LOL I write fart & dick jokes I'm not a pretentious rear end who worries what others think. I like my comic our fans like our comic & even a few people here have liked the comic. I'm hardly intimidated by 15 year olds who tell me I cant take criticism. At every step of the way someone has told us we can't make it any further & yet continuously we prove we can.

"I write stupid shit because I don't have an intelligent thought in my head. My fans say I'm good so I must be good and the only reason you don't like it is because you're not mature enough to share my refined tastes in this visual equivalent of toilet water. Now if you'll excuse me, I'm going to don my logic armor and bang my head against a wall for 5 more hours. 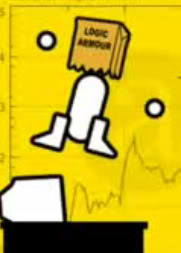 Oh, and let us not forget how at every moment in which he feels threatened about his place in the webcomic community he'll mention his awards! Yes folks, he's won some rather fancy awards, which ones you ask? No, not an Eisner award, not a Harvey, nor a Kirby or even a Reuben! He hasn't even been nominated for any of those things, what he's won is Drunk Duck's "Most Deliciously Offensive Comic of 2009!!!" Which in reality is his butt buddies giving him praise, which also means that in the world of comics in general he's got nothing. Even if one of the judges for an award that matters would somehow even come across this "fine intelligent work of art", he'd make a quick dash for the bathroom and burn the computer he was using while trying to rip his own skin off with a potato peeler while chanting "S-so horrible, the shit just won't wash off! I gotta... I GOTTA BURN IT OFF!! Where's the melon baller, I must remove my eyes." Aside from the award we've got him clamoring about how his comic is "The most controversial comic there is out there." No... no no no no no. My friend, THIS is more controversial than anything you can ever hope to achieve by having another turd joke or some cartoon character licking another one's asshole. Our current president had more controversy for putting mustard on a burger, my friend. This is more insulting & offensive than anything else, and a waste of time to anybody taking a passing glance.

To add more to this heaping pile of ego is his DeviantArt mentality. What is "DeviantArt Mentality" you may ask? Well how many page views do you got? Not very many I'm guessing, so that means you're a terrible artist! I get 30,000K views! I'm hot shit mother fucker! You... you're nothing. Do you see now? It's the thought of "If more people watch me than anybody else, I'm AWESOME!" Which isn't saying much, a lot of people love to watch car wrecks on the highway in order to look at the body parts smeared all over the road, and how totaled your car got as it rammed head first into that oncoming semi truck. As for the artist, I'm pretty sure he fully supports what his idiot partner does so he's just as big of a douche-bag as he is. Both seem to be childish, thick headed, misogynistic, racist, pot smoking, egotistical douche bags who need a good slice of humble pie. I'm afraid however that this may just add to their already over inflated ego, as they both come off as poor neglected children who thrive on this negative attention.

He is deluded to the point that he has accused the administrators of The Duck Webcomics (the same site that gave him his worthless award) of being part of an elaborate conspiracy against him.

It's a bit easy for me to say that this whole thing is sickening. So instead I hope everybody vomits up a glorious rainbow! 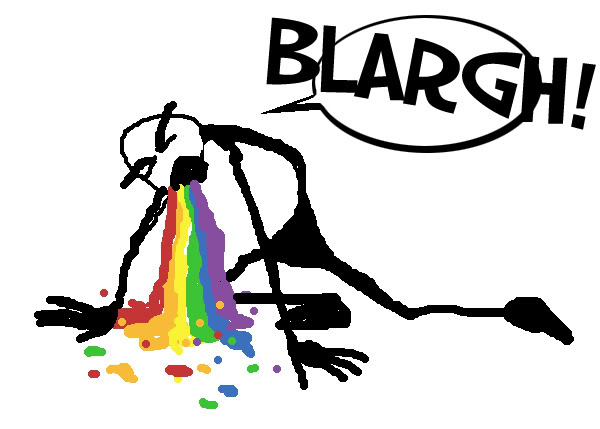