The story is basically a look at the life of an NPC in a sitcom kind of view. The world of this comic is in the gaming "multiverse" where each video game world is linked to another. The main story for MNC: AiGC (acronym for the comic's title because it's so damn long) takes place in the Pokemon "Unobtainium" video game where the titular Glitch City is located in the OhNo region. Basically all we're doing is watching main characters Chris and David as they live their life in Glitch City… In a sitcom-esque fashion. Now most people laugh at the bad puns and "wah wahh waaaahhh" moments in sitcoms, but instead of laughing I found myself clawing my eyes out and screeching unholy terrors at my computer screen. Now I'm not knocking the concept of a game NPC sitcom, no no it's an interesting idea but the thing that made me explode with rage is the way it's executed in MNC: AiGC.

It's bad, no bad can't even begin to describe this. While Boles adds a little bit of shading it's still not enough to salvage this garbage, it's like throwing sparkles on dog crap and saying it's nicer to look at. It just doesn't work. The entire shipwreck is drawn in what looks to be MSPaint in the early phases but then Boles proceeds to add little photoshop magic in the later comics but the textures he threw on the hair and the shirts makes it look like misshapen blobs are attacking the characters, making this piece of crap even WORSE than it already was. To make things worse, between 2007 to 2010 nothing improves. Hell Ramsoomair improved his art within a three year span but Boles goes nowhere with his. Aren't artist supposed to progress with their art as time goes on? 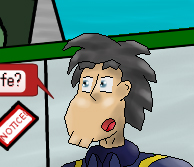 What the hell is wrong with this guy's chin. Seriously. LOOK AT IT.

Normally, bad art can be easily made up for with great, no, not even great just GOOD writing. Too bad the writing in MNC: AiGC is just as awful as the art. Each portion of the story boils down to Chris or David doing something normal, but with a silly twist! A twist that I wish would break my neck to put me out of my misery from reading this crap. For example, "Oh Chris you bought us a couch, but you spent all our money! Oh you rascal, you!" There are some parts of the comic that turn into larger story arcs… But they all end up just fitting into the original formula and sending everyone on a wacky adventure to fix whatever the crap went wrong. "David, you're supposed to watch Ashley's pet Vulpix but you accidentally let it out!" And about five pages later "Oh David you rascal, you!" It was all so funny that I laughed till I cried! Truthfully I just skipped straight to the crying part.

All in all this webcomic is a waste of space on the internet, unfunny and horribly drawn. Unless you like subjecting yourself to incredible amounts of mental and emotional pain, then I would recommend that you steer yourself far away from this webcomic. In conclusion MNC: AiGC and train wrecks have two things in common, they both have mangled bodies strewn about their scenes and they fill the hearts of whoever looks upon them with great mixtures of sadness and horror. Stay far away from this.