Misfile is a Transgender webcomic with a little automobile racing thrown in to mix it up. It revolves around Ash, a guy who got turned into a girl when an angel ‘misfiled’ him as a girl when he got busted for smoking pot on the job.

The downfall of this is it focuses on the daily lives of the characters instead of more interesting things like racing (which is pretty bland). I also believe that there is an issue with the amount of transgender crap in the strips. No one wants to hear about your period, your bras, or any of your other feminine stuff for that matter. The rare interesting transgender parts are usually skipped over within a week (it’s the only webcomic that shows how his life changed by being the opposite gender). I find the biggest crime they committed is the fact that this could have been pretty interesting webcomic but it went terribly wrong somewhere and it’s past the point where it could be corrected.

The story is done in books. Every book includes a race at the end and that’s pretty much the only thing you would ever want to read. Sadly the books are about 10% racing and 90% slow and boring daily life stuff. Unfortunately even the boring life stuff is hindered by transgender BS like ‘Boy gets his first period’ and ‘I still like girls does that make me a lesbian?’ luckily all of the bathroom and locker room stuff is done by the first book, and there is no explaining why a guy is suddenly a girl to everyone (in the story the change made it so he was always a girl and only he remembers). The other characters usually get a small part in each book (it’s almost always Emily, the other misfiled girl, or the angel).

The characters are pretty much bland and unoriginal. Ash, the boy who became a girl fills the tomboy role, Emily, the girl who lost 2 years of her life in the misfile fills the role of the nerd and the romantic interest, the angel is a slacker and all of the other characters have so little purpose there is no reason to mention them (but I will mention their flaws). Ash’s dad is a Gynecologist who can’t have a real relationship with any woman and “never forgets a vagina” but can’t remember their faces. Recently they added another girl to the mix; her job is to be an annoyance to the reader and nothing more.

Animu line drawings which have gotten better over time. He has an odd quirk about drawing girls with their hands at 90 degree angles to their bodies when they talk a lot. There isn't much variance to the art, it’s all hand drawn, there’s no copy paste panels and there isn't any color (with few exceptions). On the bright side it’s better than a lot of other stuff I've seen. 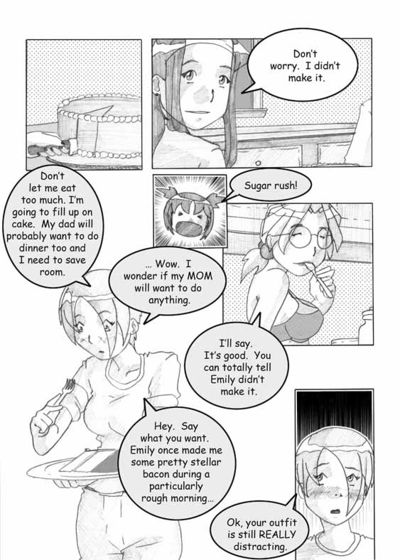 It's difficult to imagine these people even having a gender to begin with, let alone being transgender.

The story moves too slowly and is uninteresting. The racing scenes take so long to develop that all sense of speed is lost. The webcomic has way too much dialogue for its own good.

Truthfully I don’t know what this author is like but I know he’s a father and lives off of this webcomic. The previous reviewer complained and called him names but I’ll give credit where its due, he likes the webcomic and puts in hours doing it. I won’t say anything bad about him but he does have a fairly good idea to get donators; he sends a free pin to anyone who donates 10$ or more, and has a different donation pin every month. If you miss one you’ll never have a chance to get it again.