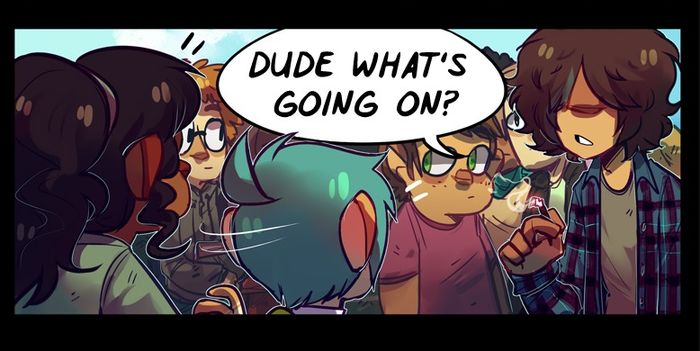 Well, he didn't make this webcomic. It was that other creepy socially awkward guy that you might've mistaken for the other guy, 'cuz he also sits at lunch alone and he likes to rant about how evil Jerry Only is, and that Michale Graves will always be the better frontman (Danzig is not part of the big discussion 'cuz he's a big-time MTV sellout, y'all).

He made this comic. 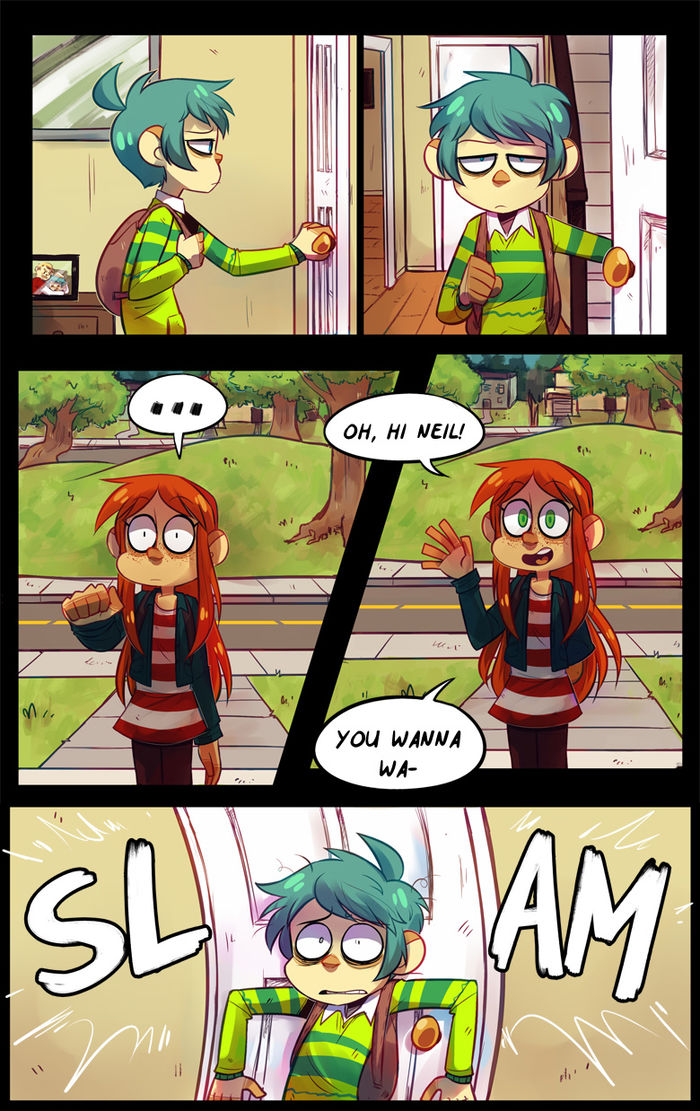 So the story's about this blue-haired punk boy named Neil, going through "hell" as he attends his first day of high school in America.

Neil is a bitch, and that's the best way to describe this bitch. When he's not scribbling down doodles of shooting down his school, he's being a disrespectful little tard, calling women bitches and fat, shouting like a maniac in his classroom, and slamming doors like a fuck. And that's the main protagonist of the story, people! This is him, so does that mean I'm suppose to like this guy? Personally, I'd like to give this guy the good old-fashioned American History X curb stomp, because Neil may just happen to be the biggest piece of shit in webcomic history. This is why I can never feel for Neil whenever misfortune comes his way – 9 out of 10 times, he deserves it, and for good reason.

Which is also why it doesn't make sense how Hannah Mills could possibly like this miserable fuck-up.

Hannah's this happy-go-lucky ginger girl who, without any explainable reason why, finds Neil to be a very likable guy and tries befriending him throughout the comic, only to be bombarded with a typical "FUCK OFF" and a door slam to the face every time. This is not how you write girl characters, because real girls don't act like this. Go up to any girl and scream out loud in their face – I can guarantee that you won't be seeing them anytime soon. Not much else is known about Hannah, as the writer has yet to write anything significant about her character.

Dion Selinn is a stoner. But not Devon Sawa or Seth Rogen-stoner funny, just a stoner. So interesting, man.

The rest of the characters are just incredibly unlikable, like shit.

The level of vulgarity Milk Toast and Maple presents is probably one of its biggest scars. When it comes to writing (comedy specifically), there's a set of strict rules you have to abide by. If you plan on using vulgarity in your writing, it has to be balanced with the same amount of jokes you put in. But the problem with Milk Toast and Maple is that it doesn't have any jokes. Well, it tries to, but I don't recall any funny or memorable jokes ever – this webcomic's a comedy right?

And what's the vulgarity, you're asking? It's cursing –and I'm expecting one of these characters to say the N-word already.

Cursing alone can actually be funny if you do it at the right time or very sparingly. But if you're just excessively cursing for the hell of it and out-of-context like a 12-year-old, it gets old real fucking fast.

Vulgarity aside, the other big issue is the dialogue. The writer doesn't bother experimenting with any puns, alliterations, assonance, whatever – he just writes away with the bare minimum in mind so he can get through the story quicker, instead of giving his characters unique dialects. The pacing also goes by too fast – squandering any potential chance that these characters had for participating in an interesting conversation. Let these cynical shitheads breathe, and make them talk for once so they can let their emotions out, and maybe not be cynical shitheads anymore! Some of the best dialogue could come from that type of stuff! 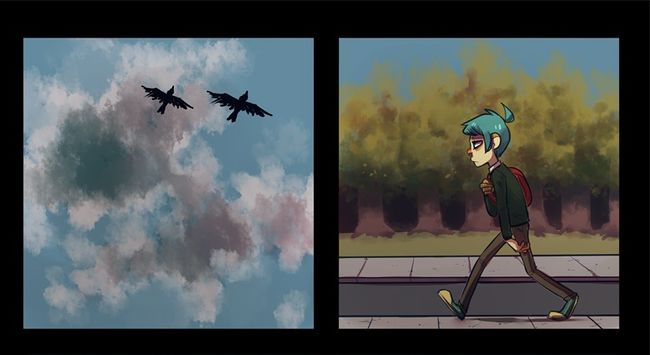 The art is where this webcomic actually gives a shit.

In an age where unoriginal dweebs get out the trace book and copy Adventure Time, Gravity Falls, or whatever cartoons grown men like to watch nowadays – it's always a treat to see something with its own original touch. Granted, your average punk-rock contrarian shithead will take one glance and point out how it's derivative of Jamie Hewlett's work, but Ami still manages to barely pinch in his own style (unlike some artists.) 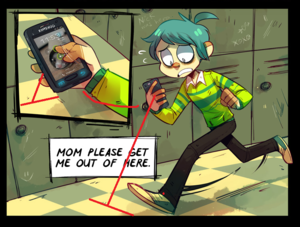 The coloring is great, the lines are broad and dynamic, the facial expressions (while frequently exaggerated) match with the character's mood and dialogue.

But of course... you want your greasy examples.

Every one or two pages, you'll find those common little flaws that your average webcomic artist starting out will look over. Examples like doors that look flat, floor tiles that are incorrectly aligned, streets with awkward perspectives... And I don't know if it's just the character's style, but every single character has a dark nose. It looks cute I suppose, but it also looks awkward – like everyone caught the swine flu or somethin'.

However, when you're dealing with art that obviously has a high level of skill behind it, minor mistakes like the three listed can sometimes be excusable. Not every line you draw has to be a perfection of straightness, and not every human's anatomy has to be drawn scientifically accurate. I am not condoning doing bad art, but I'm not denying that it's not an artistic dishonor either – professionals do it all the time. Take a look at the backgrounds from Scott Pilgrim's Precious Little Life and tell me how many straight lines you see. Or look at some of Jack Kirby's artwork and tell me how realistic the poses are. I bet you didn't know comic book artists purposely don't add in details to their backgrounds sometimes, because once the comic resizes from 11x17 to 6x9, you can hardly notice.

Ami states that he suffers from PTSD, so apparently he's a war veteran. I'm not gonna bother going too much through his history, because this is a webcomic review and I don't care. 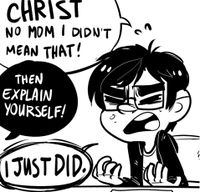 You know, Dante has a point here.

I mean, aside from just copying some Asian nerd's homework and bringing your own lunch, high school's not the time to exclusively listen to "Three Cheers for Sweet Revenge" and "The Black Parade" on your limited-edition Marilyn Manson iPod Nano. You're supposed to be getting laid, dude. Or at the very least, getting baked and not act like you're going through a premature mid-life crisis.