I originally found out about the works of Mr. Hiwatari through the article on this site by crookedglasses dedicated to Ki’s Webcomic Contradiction. I loved the article so much that I HAD to check out the comic, and it is still one of my favourite articles here. However, when I finished reading the comic, I couldn’t help but feel a twinge of sadness after such entertaining insanity. Either that, or it was indigestion. But, lo and behold! In the sidebar is a list of other comics by this insane little mastermind! And so, out of morbid curiosity, yearning for the insanity that was Contradiction, and a bit too much boredom, here is my binge read of Hiwatari’s Other Comics!

On Page 8 (or Page 7—the Title Page is labeled as Page 1) where our leading man demonstrates that he has no concept of boundaries and our protagonist does NOT get a restraining order against him. 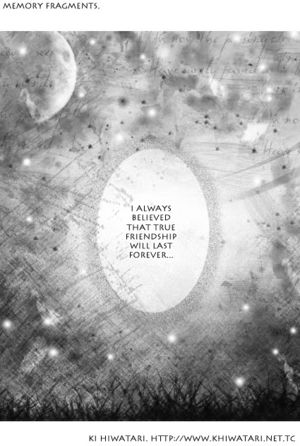 It’s not a good sign when the first page made me snort.

Once upon a time there was this Bugsy looking girl (my sis and I thought Bugsy was a chick as kids, deal with it) who moved away from Chibamachi as a kid, but has recently moved back for high school (because Mr. Hiwatari loves him some high schoolers).

She flashbacks back to the night before she moved. Then this kid comes up to her and says that he’s been watching her every day for a week (well, that’s not creepy at all), and only now decides to talk to her. This scene tries to be heartwarming except the comic just established that this is their first time meeting. Anyway, the kid gives her a ring to remember him by. …The guy she just met. Uhhhh…what? 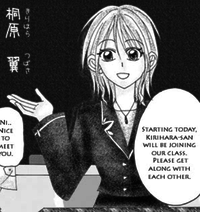 Also if that teacher isn’t a chick, I’m going to be so mad.

After finishing her flashback, Little Miss Bugsy is like “gee whiz! I wonder if I’ll ever see that guy again” and then he’s the first person she meets. Oh, uh, I mean…who is this mysterious stranger?! I’m sure he is in no way that little boy from the flashback—okay, no. It’s the kid. It’s the kid all grown up. I mean, their hair is greytoned the same. Mr. Hiwatari is trying to make this a dramatic plot twist, but no. It’s obvious from the get go. And knowing this revelation doesn’t excuse anything that’s about to happen.

Okay, so this guy is Masato Narumi, but I’ll be calling him Creepy SonofaGun. Little Miss Bugsy asks for directions and Creepy SonofaGun kisses her. That’s right. He sexually assaults her in the middle of the day. Need I remind you that he’s only met her once when they were little? For, like, an hour at most? WHAT THE CRAP DUDE?!

Wait a minute… It’s like Contradiction all over again! :D

So, naturally, our protagonist DOESN’T QUESTION HIM AT ALL, and just acts all indignant over something she should report to the police. She goes to class and guess who’s sitting beside her! That’s right! The man who sexually assaulted her earlier that day! Ah ha ha! Such comedy!

So, after class, Creepy SonofaGun glues a piece of paper to his finger just so he would have an excuse to stalk her and our protagonist takes it in stride. Okay, joking aside, after all that’s gone down, this comic does not have the right to try and make this a cute scene. I mean, this guy refuses to back off! Where’s a Hiwatari Stu when you need one?

Ah! Right on cue! :D And he has a girlfriend this time around—wait, WHAT?! You mean there’s a Hiwatari Stu that can actually be a part of a functional romantic relationship?! Wow… That’s a first. But that doesn’t stop our protagonist from crushing on him and I honestly don’t blame her considering Choice A. But Creepy SonofaGun is like “no! Sexually assaulting you means I have dibs!” and grabs her arm. 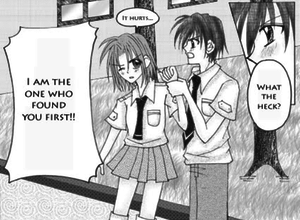 Creepy SonofaGun is about to tell Little Miss Bugsy what he should have told her before he tried to make out with her, but she cuts him off. Because Mr. Hiwatari wants his bloody plot twist. Later, on a Field Trip, Creepy SonofaGun puts his arm around Little Miss Bugsy because he can’t take a hint. I mean, call the teacher for help, dang it! But then our protagonist then falls off a cliff (somehow) and our lover boy breaks her fall. I’m beginning to sense a pattern, Mr. Hiwatari.

Little Miss Bugsy is freaking out because Creepy SonofaGun might be dying from internal bleeding. If it were up to me, I would let him die (or at least call a police ambulance), but since this is a “romance” comic, that’s not going to happen. She opens up his shirt, looks at his neck, and deduces that he’ll be okay because “[He] Looks like [he] is already healing”. …I guess he’s Wolverine now…? That’s when, PLOT TWIST, she notices that Creepy SonofaGun has the same ring as she does, meaning the creepy guy is the creepy kid from all those years ago!

WE DIDN'T SEE THAT ONE COMING!

But, in the tradition of Mr. Hiwatari’s protagonists being dumb bimbos, Little Miss Bugsy’s like “how did you get this ring? HUUURRR DUUUUURRR!” …Granted, it wouldn’t surprise me if Creepy SonofaGun stole the ring from the rightful owner just so he would have an excuse to force himself on someone. If that’s the case, then this entire page is bull.

So, Little Miss Bugsy sparkles a bit, before the REAL plot twist is revealed…Mr. Hiwatari wrote a teacher who actually cares about her students! 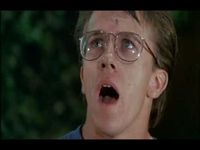 This comic has all the proportion issues found in Contradiction. In the interest of not repeating what crookedglasses already said, I’m going to focus on a different aspect of the artwork. Mainly, the Vague Backgrounds.

This is another criticism that can be applied to most of Mr. Hiwatari’s work, but it’s a bit more noticeable in this comic. The reason why his backgrounds come across as vague is because he doesn’t draw nearly enough establishing shots.

For those of you who don’t know what an establishing shot is, it’s basically a wide shot showing most of an area so the audience can keep a mental note of where everything is in relation to everything else. Like, how far apart two characters are standing, how many chairs are in a room, etc. Establishing shots are not always necessary but they are still bloody important for clarity. Establishing shots are very important in comics/manga because, unless you’re someone like tracyjb who draws every single detail ever in every panel, you’re going to want to just one or two objects to imply there is more outside of the panel, and fill the rest of the space with speechbubbles and gradients. 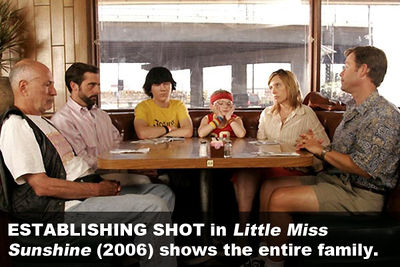 An example of a typical establishing shot.

And this is the problem with Mr. Hiwatari’s work. I’m guessing that he learned how to draw based on looking at his favourite manga titles. So he learned that you can get away with only drawing a few things to imply the characters are in a location without showing that location off. But he never learned why those artists could get away with it (the comics had an establishing shot earlier). Hence why I’m criticizing his Vague Backgrounds. Because while he sometimes has decent establishing shots, he doesn’t have nearly enough.

Take this page for example. She’s on a playground, but the only reason I know that is because she’s sitting on a swing, and there’s a vague shape of an elephant slide behind her. How close is this playground to her house? Is it in her backyard? Is it in the middle of a park? Are her parents nearby to supervise their five year old? Where did Little Creepy SonofaGun come from? Who knows? All we know is that there’s an elephant slide by the swing set.

How about this page? On the previous page it showed that this was somewhere by Chiba High School (entrance maybe) and that there are bushes. Apart from that, I have no idea where he is in relation to the school. Is it a crowded area? Is it a parking lot? Is it behind the school? No idea! He’s just standing beside a nondescript brick wall.

You could really do this with 90% of the pages in this comic, but I’m going to skip to the comic’s biggest offense, which is this page. Now, in the plot summary, I said our protagonist is falling off a cliff, but I was taking some liberties here. Truth is…I have no idea. We never see the cliff. We see Little Miss Bugsy’s foot slip, we see her fall over sideways, then cut to something unrelated, and then she’s on the ground in a different location. Did she fall off a cliff? I think so, but without an establishing shot, I have no idea.

Now, while the Vague Backgrounds are a probem in most of Mr. Hiwatari’s comics, he seems to have learned his lesson in his later work. (In My Sparkling Prince-sama he does almost the exact scene, but he actually draws the cliff this time.) So, yeah. Bit of an irrelevant criticism.

One final nitpick about this comic’s art specifically is the banner at the top of the page. Click on any one of this comic’s pages and you’ll see the banner image (A.K.A. this one). Like me, this was probably the first image you saw before any of the pages. With that said…um…spoilers? Like, on this page it hints that this comic’s Hiwatari Stu might become a romantic interest, but that’s completely undermined by the banner at the top of the page showing Little Miss Bugsy and Creepy SonofaGun as a couple. So…yeah, no. Make the banner something else if you don’t want your audience to figure out your “plot twist” before the end.

So...what kind of characters are in this story? Let's take a look: 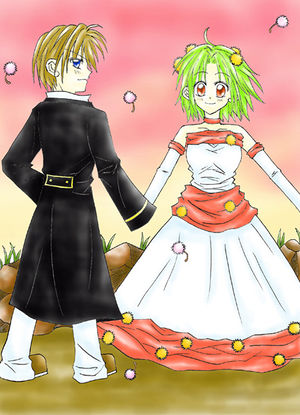 Are they standing in mud?

Tsubasa Kirihara (A.K.A. Little Miss Bugsy) – She is absolutely unnoteworthy except for making you want to scream “CALL THE COPS, WOMAN!”

Masato Narumi (A.K.A. Creepy SonofaGun) – AHHH! Get our protagonist a rape whistle because this guy is climbing in your windows and snatchin’ your people up. If Turbulence is what happens when you ramp up the Abusive Jerk by 200%, then Memory Fragments is what happens when you turn up the Creeper Who Seems Nice at First by 200%. I mean HOLY CRAP! I thought Toshino from Contradiction was bad, but he doesn’t even come close to Masato’s level of creepy! How is this kid not in prison yet?!

Kazuya Takeura (A.K.A. This Comic’s Hiwatari Stu) – It’s actually kinda nice how little presence this guy has. Less is more, I suppose.

Sachiko Koba (A.K.A. Teh Girlfriend) – Leh gasp! A character that has less of a presence than our protagonist? Amazing!

Sae Matsuyama (A.K.A. The Teacher) – Mr. Hiwatari, are you feeling okay? I mean you wrote a slightly sympathetic teacher character… What’s your temperature?

I don't really have anything to say that I haven't said already about Mr. Hiwatari. If you want to know my opinions, then read the Le Diable and My Sparkling Prince-sama reviews.

I actually had no idea going into this comic whether or not it was going to be bad, since it was the first comic I read purposefully for this Marathon. However, even though I was going in blind, it didn’t take long for this comic to prove that it deserves to be on this site. My first impressions of this comic were mostly me screaming at all the creepy stuff Masato does. But after taking some time to reflect…this comic is kinda funny. Not the funniest “so bad it’s good” comic, but it was pretty amusing at times. Give it a read if you’re curious.