Woohoo! Today we launch! This is the section of the comic that I hope everyone will find sucks. Not just suck in the same old sucking way either, MegaTokyo promises to suck in new and exciting ways. Piro and I have spent years in the field of researching suck. To you, our audience, we make this one pledge, above all else - we shall not fail to suck!

And since those humble beginnings, this webcomic has always kept that pledge. 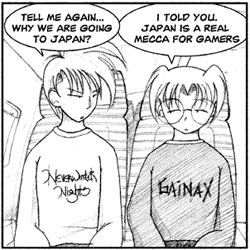 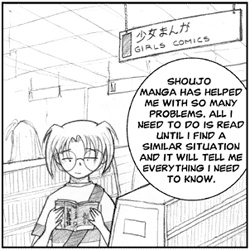 When real men have problems, they read comics made for Japanese schoolgirls.

Megatokyo centers around two guys. Their names are Piro and Largo. One is an obnoxious, pretentious anime geek. His name makes it sounds like he's going to set fire to his house. The other is an obnoxious, unpretentious stupid gamer. His name makes it sound like he's going to play an agonizingly slow symphony for us on Guitar Hero: World Tour. They wind up trying to go to E3. They get kicked out. Piro gets Largo drunk, and while he's so incapacitated Piro suggests they go to Japan. Which they do.

Early on, it's mainly situation comedy, based on two westerners in Japan, with one of the major tropes being alternative viewpoints. Largo, as a slightly idiotic gamer, and not speaking Japanese at all, sees Japan in an extremely exaggerated and stereotypical way, with Godzilla rentals and refueling stops, a Sony private army with PlayStation-branded tanks and guns, and hordes of zombies (who are, in reality, obsessed otaku out for some amateur paparazzi action).

This was contrasted by the straight man viewpoint of Piro, who is somewhat lost in his own world of shoujo manga and dating games, but tends to see things in a more realistic way. (With the exception of Ping, the Sony PS2 sex toy robot accessory.) At this point, all this was in good nature, and reminded me of the way Calvin and Hobbes comic strips depicted imagination. However, as Fred took over the story, things took a 180 degree turn. No longer are the obsessed otaku "seen as" zombies. They actually are zombies - though mundanes may see them as regular otaku. Nothing demonstrates this more than the recent storyline, where this "Horde" (almost handled as a metaphysical threat now) has inexplicably destroyed an entire real world school building, full of students.

Much of the later story weaves around Piro's love triangle with Kimiko, the super-nice voice actress who mostly lives in the real world, and Miho, originally a hacker / troll gothloli girl, who had messed with Piro's feelings in an MMORPG. We're not seeing much of Erika nowadays, but Miho has been unveiled to be some kind of eternal vampire queen. As of June 2014, Megatokyo is mainly a "split world" story, with a "magical" or "true", and a "mundane" world, separated by some kind of veil. Naturally, the protagonist Piro is strangely and inexplicably (probably it's his awesome beta male EQ powers) gifted in stepping over the rules of the magical world, and the veil that separates the two. This, of course, is an overused bad anime trope in itself. How surprising.

"Largo was interesting because he seemed to be completely unaffected by the hidden 'emotional statistics'. You, on the other hand, were very adept at working with them. So much so that I thought you really were a female player." - Miho

There are signs of an attempt to equate the "supernatural" world to the metaphysical reality of fictional characters and stories, which COULD be an awesome idea to build upon, and is somewhat reminiscent of the Neverending Story, but the execution is incredibly bad, and whatever drops of genius might be present are lost in a sea of cheap melodramatic anime tropes.

Fred Gallagher's art redefines horrible. This is because Gallagher is lazy, not because of any lackings in understanding art. In fact, he was actually an architect for many years. In case you're wondering, yes, that means you have to take four years of art classes, alongside working in extensively detailed drafting and precision drawing. This does not help his case. In fact, it makes it worse. A former architect should be able to draw better than this. Furthermore, Mr. Gallagher should have some experience with using a pen or some other type of inking tool. His comic doesn't show said work. Unless, of course, you buy his inked-and-colored comic books from DC Comics, which is hardly fair, considering that buying his work at a premium does nothing to alleviate from the fact that Gallagher's lazy, long-winded writing is as bad as his lazy, hamhanded drawing. 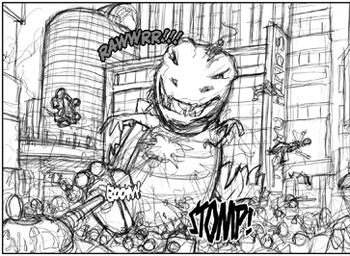 Erasing sketch lines is for losers who actually give a shit about their art.

The first thing you'll notice about the art in Gallagher's comic is that his characters do not have tongues or detailed, three-dimensional mouths. Rather, they have two-dimensional shapes where their mouths should go. The second thing you'll notice is that all of his characters have the same basic style: Not enough detail in some places, too much detail in others. His eyes look like a four-year old's on the females in his comic, regardless of age. The males look the same as the females in all appreciable ways, save for the eyes, which are beady and incomplete-looking. Gallagher's side profiles almost invariably have snoutface, a trait of American manga-kas who try way too hard to imitate Japanese cartoons.

In short, unless Gallagher has some kind of cognitive mental disorder, there is no reason for his wispy, irregular pencil strokes, inability to ink his comic, inability to draw three-dimensional mouths, and inability to stop imitating anime artists in every way possible, excepting their best qualities. Notice that the linked drawing does not have snoutface. Apply that to the rest of your comic, please, Mr. Gallagher, as most of your work lacks that facial detailing, and should not. Well, hell, although I guess you're just slavishly imitating Japanese artists, right, so you can appease your Japanophile fanbase? And they'd leave if it didn't have that inherently Japanese look? I guess you've painted yourself into a corner. Great job.

Moving from art to writing in Megatokyo is like moving from an oil refinery to a slaughterhouse. The former merely stinks, the latter is literally repulsive. Unlike a slaughterhouse, though, his writing isn't necessarily terrifying or traumatizing; it's more like Chinese water torture, slowly dripping like a broken faucet from his characters' malformed lips, entering your psyche one swollen word-bubble after another, slowly driving you to insanity with its ridiculous inanity. The writing is shit, is what I'm saying.

It helps me to think of Piro as Phil Collins and Largo as Peter Gabriel. At first they formed a band called "MegaTokyo." It was reasonably awesome. They made great albums like The Lamb Lies Down on Ginza and Foxgirltrot. Then Largo left. Piro would direct the band to making shittier and shittier songs, until eventually the band sounded like a bunch of obnoxious whining pussies who couldn't get laid without writing out long-ass ballads for their girlfriends.

That's where MegaTokyo is right now. It is at the Invisible Touch phase of its career. Soon, Gallagher will have the band caricatured as puppets and they will sing tirades against the ineffective Reagan Administration. Then Gallagher will go solo and make even shittier solo albums, even bitchier and somehow more popular (but only among fangirls and gay men) and these songs will be even lamer. It will suck, and we will all wish we were dead for being alive when the horror occurs.

Imagine the most pretentious vampire fantasy dreamed up by a socially awkward schoolgirl, add some Harry Potterism, gamer lore, elements stolen from some of the most pretentiously enraging anime ever conceived, and an extra dose of modern japanophile orientalism (ie. cultural appropriation and condescending racism galore), some serious beta male pride (think "yea man, we betas are so awesome, very emotionally mature, wow, such EQ, damn, why don't women appreciate us"), and you get the writing of Megatokyo.

It manages to be sexist in the worst way ever, degrading to BOTH sexes at the same time (a feat it undoubtedly learned from the enraging "emotional" anime and manga it tried to copy), and horrendously racist while attempting to be an homage. Yea I get it that this is supposed to be the "idealized Japan that exists only in the mind of an American japanophile", but it manages to do this in a particularly offensive way, with whatever irony it first had, lost in the process of Becoming A Serious Emotional Comic. 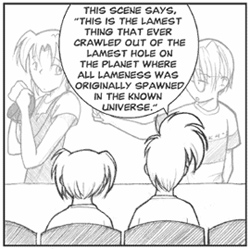 Since Rodney Caston left, there's been no good news to report about Megatokyo. There's no sense of humor left in his absence. It's quite clear that Caston was the Enkidu to Gallagher's Gilgamesh, in that he inserted a bit of life and humor to the lives of Megatokyo's buttoned-up, stolid characters. Since most of this review regards Mr. Gallagher's work, rather than Mr. Caston's, I will summarize by saying this: Freddie Gallagher needs to get a life. Or, barring that, it would be nice if he gave his characters a decent one.