Magick Chicks is accessible thanks to Pixie Trix Comix, a site infamous for sponsoring most of Giséle's current works, as well as Candi (boooooo!) and other likable targets for this site.

This webcomic is a direct spin-off of Giséle's Eerie Cuties. The plot revolves around 3 characters recycled from Eerie Cuties. They had been kicked out of Charybdis Heights School for having caused a big genderbending and bimbofication catastrophe. The school's Headmaster was forced to get rid of them somewhere in the next chapter. And the "somewhere" in question? This webcomic.

Since the very beginning, this webcomic never was good. After a couple of chapters, it started showing the same downfall Eerie Cuties had: fanservice-for-quality, which has turned out to be Giséle's trademark since the beginning chapters of Ménage à 3. Also, the characters are the type of airheads you would only feel attached to if you were 15 years old. 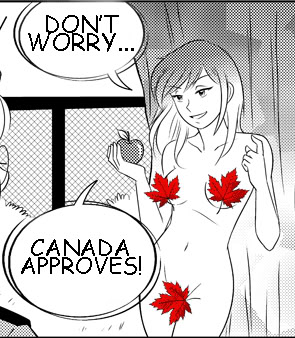 Having been expelled from Charybdis Heights School and the Eerie Cuties webcomic itself, Melissa Hellrune and her two stooges, Jacqui (a black girl in heat, permanently) and Cerise (probably the only somewhat capable brain in the group), are now attending the Artemis Academy. This is also a school of horrors: as far as you can derive from a couple of lines between Eerie Cuties and this webcomic, it is a training facility for moe monster and witch slayers. Having lost their place as the most popular girls in school after being transferred to Artemis, they, sadly for us, begin their long and tiresome track to recover their former status. Sadly for them (sympathy? I don't have it. Remember how Penny has complexity?), things are different here, as Artemis is a girls-only institution. Uh-Oh!

Their popularity at their former school was based on how much boys liked them, which becomes their defining flaw as they become the new girls on the block and wonder how to kick the current pop queen off her throne. Apparently, this bone is difficult to gnaw, as she shows how is she the queen bitch by humiliating them and even challenging them.

Let's talk about the three witches. First, we'll start with Melissa Hellrune. She's a kid desperate to bully everyone on sight, which was easier for her when she was the pop queen at her former school. Jacqui can literally smell guys, and immediately leap at them the same way groupies did to Mick Jagger. And then it's Cerise who's somewhat capable and smart.

Originally black-and-white pictures, then later on color was introduced. The number and size of panels would vary in each strip, as was the case with Eerie Cuties. 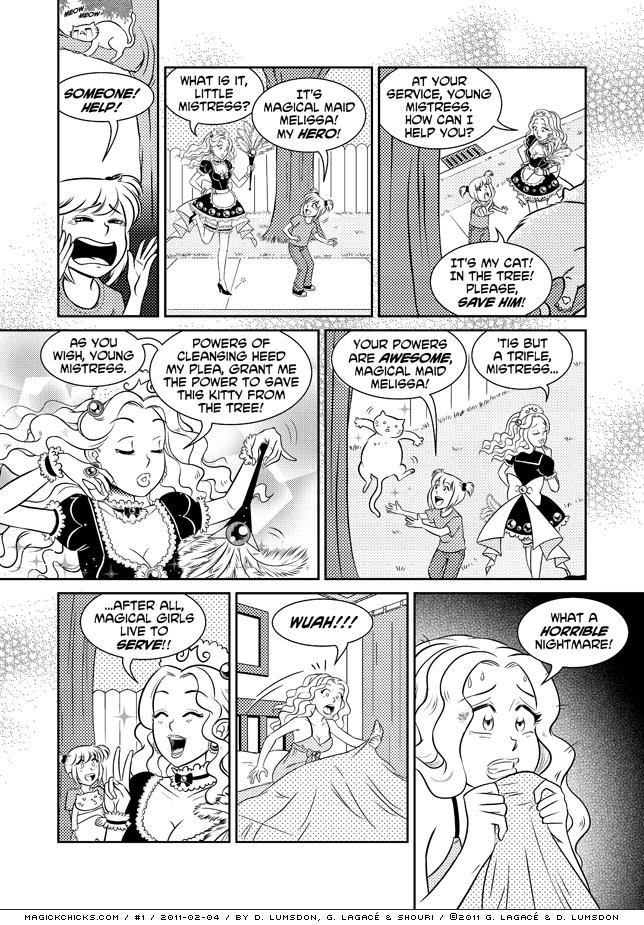 The initial strip. Sadly, the rest of the webcomic proves to be a lot less innocent.

Oh man, Giséle turned to be quite a capable artist by successfully mixing up America's favorite, Archie, with manga style. So, sadly, there's nothing to complain about on this section.

So sad, my sarcasm sense is hurting. Although, I think it's being sarcastic...

TurtleSheen riding in on my board to do a little ninja-addition here. Word on the street is that Giséle is a good artist. Though still mostly tight, her art in this webcomic becomes lazier as time goes on. Her apparent boredom with the non-tits and other non-chest (yes, it goes on for 4 pages. Lust, profiteering, or a little less shame about the male body? You decide) part of this webcomic shows up in coalescence of faces into a single form. In uniformity, these faces look more like The Wotch: CHEER! than Cool Cat Studio.

All of those three jokes this webcomic has for main characters were some secondary characters at another (bad) webcomic. They were simple, bland, dumb. And they keep on with those feats for this work. Their only ally at the new grounds is another sideshow boob from Eerie Cuties, Tiffany Winters, a sad and clumsy as heck daughter to a family of moe monster and witch slayers who is only not any more pathetic because it would undoubtedly make her less moe, and way more useless than she actually is. All Magick Chick characters share something in common: they crave for attention. However, our title characters only rely on bare looks to get it rather than skill and charisma as their opponents do.

I'll makes this short (nope, really I won't), at TV Tropes there exist a nice article about how does the villains of the story makes the story what it is. The villains should be someone sly and dangerous, but more importantly someone SLY. These kids are not. In Eerie Cuties, they were just some pop airheads villains just like the ones you find in 00's cartoons. If you ever watched the villains in those cartoons, you'll easily notice they're dumb and cowardly as heck, making the plots easy to catch and the heroes work less to succeed. The problem is that the plots weren't as involving or scary. They don't make you respect or hate those guys. You simply were astonished at how stupid they're even to be the bad guys. Thus, unless you were 8 years old, you wouldn't care for it.

That's what they were at Eerie Cuties, and they're no better in this webcomic. However, they're now the "heroes" instead the bad guys. The actual bad guys look badass. But they're just a bunch of nymphomaniac, bishie kiddos craving for sex with anyone on sight.

I don't get how a group like this even gets their own show. It would be like giving Toad from the X-Men: Evolution series his own show. Seriously speaking, these characters were your stereotypical dumb villains in their original environment. Here, they're just stupid, and mediocre as long as we're forced to watch them going from mediocre to cool.

The writing has is the plenty of Bishie as the main "villain" of the series hits everything that moves. Indeed, expect from this lots of bishie/lesbian/gay yiffing.

Until we are given a real reason to like these three stooges cast as fuckholes, liking them is just shaming yourself. 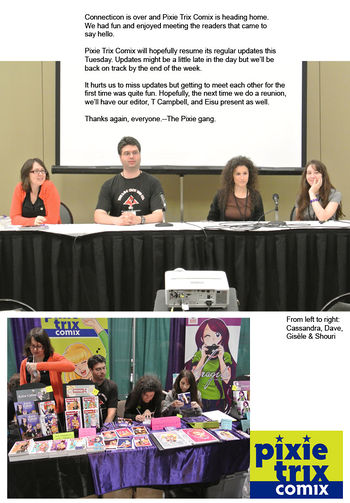 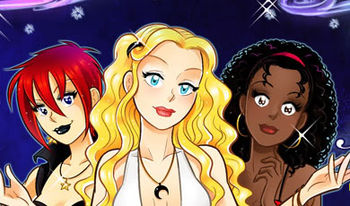 Tempting, but you could get incarcerated just by asking them out; or thrown into a boiling cauldron.

At first I though this could have been some kind of story about personal development, as the intro to the webcomic shows us that the main characters are afraid of being the nice gals. So, after being "punished" by making a MFG huge mistake, they're exposed to an environment which actually demands the best of them all. With a base like this, we're expecting them to realize their own mistakes and fulfill their principal's aspiration to make them become better people.

They don't. They don't even start to.

As a site member once said, "What's wrong with this woman!?" That pretty much is what describes my reaction to this. I'm not a paragon of morality, but I'm clear about how wrong is to sexualize children for the sake of boosting sales. At Ménage à 3, it went out of control by introducing a mary-sue for the sake of having everybody yiffing together. It practically ruined Eerie Cuties which started as a nice and pink story you could enjoy with your children, turning it into underage pinups. This is just an extension of another story for the sake of having more additional spank material for sale.