At first I was going to toss Ménage à 3 off as another nerd fantasy comic when I found out it was written by a girl (Giz) so it got my interest as why a chick would write one of these annoying generic things that are only set out to appeal to guys she probably wouldn't give the time of day. So I decided to inspect the comic.

The story is about a nerdy guy named Gary who looks like Dilton from the Archie comics and whose roommates fall in love and decide to find a place of their own. So surprise, surprise two attractive women answer his ad and end up living with him (one being a pervy, bisexual rocker girl and the other a big-boobed French Canadian) where they have plenty of Archie and Three's Company style situations. All with almost everyone acting like drooling morons and getting into unrealistic sexual situations.

The comic was pretty much mediocre at first, but once the girls get into the picture, the fanservice really goes into hyperdrive. 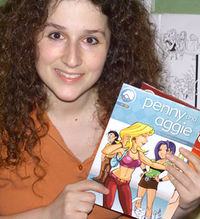 The author. Back when she was loved and well-respected by everybody alike

She's canadian, a Graphics Designer and genuinely worked with the industry as a penciler/inker for Archie's comics, America's favourite!. I mean it. Though we can't really tell if she's got any experience working with EDITORS, since she could have been working from her home instead of having to meet one at any time.

Actually Giz is a pretty good and has this Archie-meets-anime style that for the most part works. She knows what perspective is and has a good grasp of anatomy.

Admittedly, the artwork is better than that of the old "Cherry" comic book.

This alone would have me just pass Giz as another no-imagination type who watches too much anime and hasn't gotten laid, but then I started reading in a little further and realized that no self-respecting woman would write a character like Didi as anything more than a one-time joke. Didi is the previously French Canadian who nothing more an excuse for Giz to show tits jiggle and bounce and have the other characters poke and drive their faces into all while speaking in broken English that would make an amateur fansub company jealous. This alone could be saved if Didi acted like a person who was actually aware of her surroundings and had an expression other than “durrr” on her face 50% of the time. But no, she’s just fuckbait who takes any grabbing and drooling as if it was no big thing. For example there's a scene where after letting Zii touch her tits only to have her dive in and cry all over them, she wonders if this is "female bonding." I'd understand if she was from another planet, but you'd think someone her age would have some sense.

The same could be said for Zii as well. Though Zii is flat as a board, she’s portrayed as an ultra horndog who loves throwing people into sexual situations and getting as many grabs off Didi as she can. Being comfortable with your inner perv is wonderful but having this little respect for the personal space of others would get your butt kicked in real life. That finally leads us to our virginal, 29-year-old who looks like he’d be carded for an R-rated movie, Gary. Let’s just say that this guy is the ultra-nerd. He cries like a loser, gets pathetically horny and then gets no joy when the situation arises because he’d rather jerk off to porn than touch a real woman. Giz tries to give him an excuse for his hang-up, but it doesn't feel realistic. At least with The Forty-Year-Old Virgin, they gave humanity to the main character’s hang-ups by addressing his belief that because his last few sexual relationships went to crap, that he convinced himself that he breaks every relationship he touches that it’s better to be alone as well as his fears that the girl will laugh at him or he’ll do a bad job or get her pregnant. Gary just drools and is a total wet blanket in every situation that few people could stand being around for more than ten minutes. He even takes the fun out of zombie movies by telling you how they’re nothing more than rip-offs of a plot from the Smurfs.

One thing which can infuriate people with common sense (or just the concept of personal space) is that the character Zii is granted Mary Sue-like powers to bend the very reality of the world around her to her will. Frankly, this character is so poorly build up (just like the others), that we can only loathe her exploits rather than admire them. She's a womanizer/maneater, bisexual, metalhaed...and those are just adjectives. She's pretty much that old guy who never achieved anything in life, and tries real hard to make up for it by hanging at that old workers' cantina hitting on divorced, widowed old women for comfort. Except, she's made to be the one who gets to stay in bed the next morning, instead of heading out for another unfulfilling day at a dead end job. The whole comic just switched to help Zii fulfill all her dreams and desires without properly telling the audience all the sacrifices she's got to do. And the drawbacks from a person who makes genuinely straight men fuck each other and have this torment their life and own identity afterwards. As addressed earlier, she actually tries to force people with a defined sexual orientation into trying things which later, as numerously portrayed in the comic, ends up causing more harm than good. Didi loses her best friend. A guy who enjoyed cold meats is tormented by sausages. A married woman divorces her husband over her child's trolling of Zii on the internet...I swear we have seen that one before. Well, it's not that bad, breaking the fourth wall, one of her shenanigans end up with a character being scrapped from the series, and starting another one written and drawn by a much more competent author. Now we just need this to happen to all the original cast, and we can call this madness out for good.

But I can tell that even she doesn't fully have her heart into pleasing nothing more than her fanbase, because she likes to show moments of not-worksafe slashiness (without showing penis) with Gary’s ex-roommates who get some nice sexy scenes probably to keep her sanity. Sure there’s a fairly graphic scene of Didi having sex with her boyfriend, but her nipples are covered and she’s all miserable afterwards (probably to give the readers hope that attractive men can’t make girls happy). It seems that Giz is trying to fulfill some of her own fantasies or appeal to people like me. Sorry but I’m not interested. I like good writing, characterization, and a reason to see your sex scenes when I can just go over to Y!Gallery and see better stuff whenever I want to.

A sad thing about this story is that it must be noticed the whole thing promised a approach of the Geeks =/= Sex stereotype. In late years, we successfully received that through the Big Bang Theory sitcom. What they did Gisele could have been capable of exploiting if she hadn't decided to shit on her own characters for the sake of sexy shenanigans. Gary in the beginning of the story was shown to us in a Steve Carrel's 40 years-old virgin esqee, a man with a self-imposed inability to engage in emotional or sexual relationships with women. He was shown as capable of telling friendly flirting from the seductive type. However, as the story progressed, the author decided to flanderize him from a person capable of picking up interesting activities for a date, down to a hardcore geek whose idea for a date is going to a comic book store. Because, you know, ALL girls sure would love to spend their evening barely exchanging words and physical contact for browsing pile after pile of old superhero stories.

And here we are, the big thing. The very element which pushes this comic stories forwards is also its own doom. This can't be treated so easily since it usually takes pages to build up. I'm refering to the whole cast in this comic being uncapable of fully understanding what they say to each other. The premise for every adventure, specially Didi's, is that of the characters having the conversational skills of a 4 years-old. When this happens, the whole cast will get inmersed in all the sexy hijinks previously mentioned. And this won't end up soon. Many times, this comunication dissabbility will prolong for months if not years. Because, despite all the akward situations they get into, none of them will act like a normal person and ask for a clarification. Or ask people to say that again. They lack that skill. Come to think that most of the annoying situations in this comic would have been averted only if they stopped to ask for directions.

Repeating that over and over again only gives you the impression of whenever it happens, is forced into the scene just to move the story forward to the next misunderstanding.

Other than the better than average art, there’s not much saving this webcomic and Giz you’re not fooling me when I have a good feeling you don’t give a damn about anything other than getting a fanbase. You have no story to share for us to enjoy and that’s just sad.