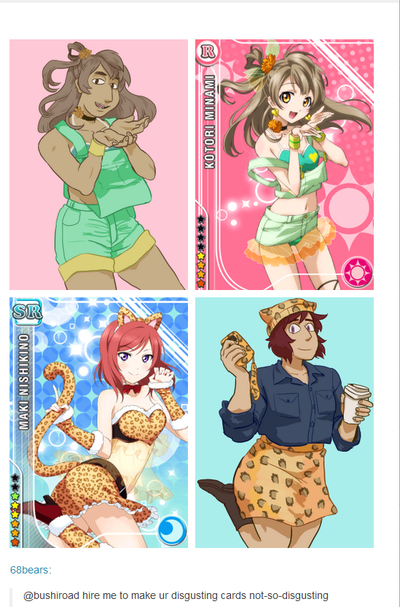 The picture that started it all – gotta unwhite and uptrans all those evil anime characters!

On our wiki forum, in the off-topic thread, forumite Fallinq shitposted as usual, including a choice image of what appeared to be some tumblrite having redrawn some animu bullshit into tumblr bullshit instead. You know the usual, turning white skin brown, clearly female characters into indeterminably/probably trans, that sort of bullshit. Webkilla, being the collossal faggot that he is, applied google-fu and found the actual tumblr it was posted on, and via that discovered that the tumblerite had a webcomic. The rest as they say, is history.

With an official description that reads...

"Comic about several young adults going through different events
has LGBTQ+ themes
mild NSFW but not rly graphic. rly its just a titty every now and then + mentions of sex
also drug use but not dangerous drug use"

...then it is reasonably safe to argue that this webcomic was never good.

The first page is equally catastrophically lackluster, and gives the reader absolutely no reason to click to the next page. 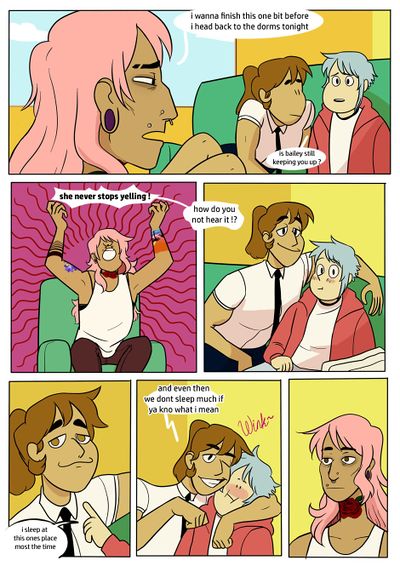 This one has it all: a normal face at first, then three no-effort faces, then an ugly smug-face/normal face/ugly smug-face combo, then some more shit, wrapped up with a shot of the same character as the first face, but looking ENTIRELY DIFFERENT. Fuck this webcomic's bad art and attempts at meme-faces.

Do you remember RCDart? The Tumblrina who drew fanart of Captain America and Tony Stark as trans? It was a thing on trans-Tumblr a number of years ago.

Basically, the faces that 68bears draws look eerily similar to how RCDart drew her faces. That is not good. That is, in fact, really fucking bad.

The sad thing is that some pages contain stuff like the last panel here that reveal the artist to be actually competent, and yet, more often than not, it's only possible to see if a character is male or female via their intro text. Mind you, sometimes the female characters are drawn strangely male.

In short: the cartoonist can't do consistent anatomy for the life of him.

That's it. Sure, there are other character interactions throughout the webcomic – but absolutely nothing that resembles plot. These are characters you're never given a reason to care for, they're just... interacting. There is no story outside of "brown and blue hair hooking up and one of them feeling weird about it".

Did you read the plot section of this review? Did you notice how the characters were being referred to? The reason for that is simple: characters aren't so much introduced; rather, their character bio-pages are mixed into the webcomic like this or this. Basically, all "main" characters get this treatment, utterly and completely violating the "show, don't tell" rule. We are never shown, only told – but then again, the important thing about all of them is never their personality, it's that they're all somehow LGBT, because this is an SJW webcomic.

Some Tumblrite nobody, presumably a male human? You can go check out the cartoonist's Tumblr if you want to learn more. Remember, service guarantees citizenship.

When your art looks bad enough to allow for parallels to be drawn with RCDart, then... it's time to stop.

This isn't as much a webcomic as it is mindless navelgazing and trying to cram as many LGBT non-white characters into a single webcomic, without giving any of them a real personality beyond three or four lines of text to describe them. This is someone going "I totes made an LGBT webcomic with no white people in it, aren't I progressive y'all? Slay queen!"