I love low hanging fruit. By low hanging fruit, I mean terrible webcomics that are in their beginning, nascent stages. This allows me to read the entire comic and crack out a review in record time. The best part about reviewing young and bad webcomics is that it’s soon enough to effect some meaningful change. If the author sees the review and wises up, then I might have saved them years of their lives reworking their old shit into less shitty shit. However, if the author chooses to flaunt my findings and continue on their shitty path of shittiness, then I get bragging rights as being the first one to point out what a piece of shit their work is and always has been.

It’s a win-win situation for me.

A friend of mine had told me about the works of an internet artist named “Senshuu” aka Jessica Cantlope and that her works were very, very terrible. I took the challenge and began trolling for her works. My findings conclude that her webcomics and art are, indeed, awful and that, like any horrible webcomic artist, she’s gaining in popularity. Of course.

The work of hers most deserving of my bitch-slapping today is Lovefeast, a wholly anime-derived work that features incredibly confusing storytelling, yaoi overtones, and some terrible anatomy. I've torn through the whole thing in short order and I can already see its redeeming qualities are dwindling at best. Cantlope, if you’re reading this, I hope you’ll learn something, because your comic is off to a bad start.

I…I don’t know. Again, I have to default to the author’s official blurb because I have no idea what’s going on. Let’s compare and contrast:

Picture this: you're in a strange, new place. Everyone, especially the guy you like, seems to think you're "odd". You're encountered by myths on a daily basis. Oh, and you're a death god now. At the Institution for Training in the Arts of Death, people who have renounced their former lives struggle to maintain their humanity while training to become Gods of Death. The history of the Institute is interwoven with many successes but also with many complex relationships and personal hardships, so it becomes easy to lose sight of good, mercy, and the highest of loves—especially when one lives to deal with death and that beyond.

Oh, that clears everything right up, because these were my original thoughts:

It’s very plain to see that Cantlope’s intentions are not properly conveyed in this story. While one can argue that 24 pages isn't enough for a review and that the story simply needs more time to mature, I say NAY! If you can’t get a decent, engaging, even quasi-logical, story off the ground in 24 pages of comic, you FAIL.

Note that Cantlope does a better job of conveying the butt sex in her comic’s first 24 pages than she does anything about the God of Death system. Just saying.

Pssst, Cantlope. Your weeaboo is showing.

The art is not nearly as good as Cantlope would like to think. It’s riddled with anatomy issues, and mostly devoid of backgrounds. Also, the art does not lend well to visual storytelling as I cannot tell what the fuck is going on based on the pictures alone (though the words don’t seem to help either).

Oh, the anatomy. Cantlope has seemed to develop her own “style” which appears to be somewhat derivative of anime. I appreciate the departure, but she still doesn’t know how the fuck people are supposed to be proportioned. Or how not to draw a guy’s eyes too close together. Or whatever. There is no point developing stylized characters if the artist still can’t draw normal humans.

Also, the comic is, for the most part, fairly devoid of backgrounds. Every so often, Cantlope does put out something that shows she’s at least got a grasp of perspective, but for the most part, she does the terrible manga trick of just drawing a series of talking heads and calling it a story. Or worse, uses textures as a substitute. While this might be a stylistic preference and I may just be acting like a big ol’ ogre here, I believe that there’s an inherent amount of laziness that goes with not filling up a frame with the slightest hint of setting. Stop being lazy, Cantlope. Fill yer damn frames.

Finally, the visual storytelling is absolutely confusing. Cantlope has no grasp on how to move a story along by pictures alone. It’s been said that a sequential story should be understood without any lettering. Let’s test that, shall we? I’ll take a three sequential pages of Lovefeast that don’t even have words, and you see if you can’t figure out what’s going on. 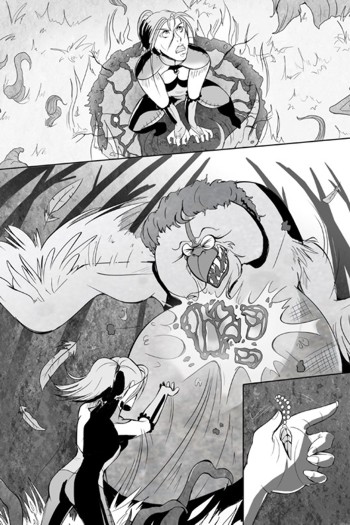 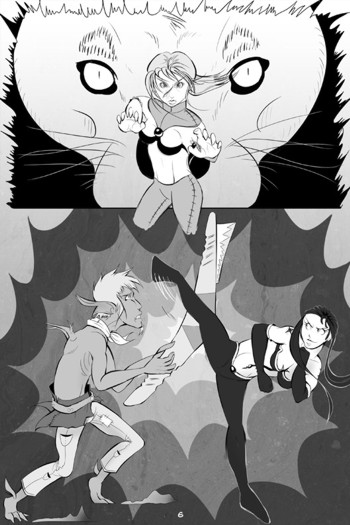 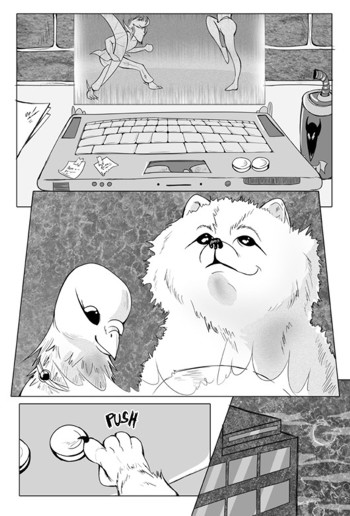 I’m not sure what I can say about the writing that hasn't already been said. It’s confusing. It makes no sense, and it doesn't match Cantlope’s official description. I don’t know anything about the guy who dies in the beginning, what the wolf attack on some other guy means, or anything that’s going on. Again, since the comic fails so miserably at the visual storytelling, how can the writing help? What little dialogue there is here makes no sense, that is, until you get to the bully going after our totally kewt ghei boi from the start of this whole mess. At which point, I have to chide Cantlope for getting into politics before even getting her damn story started. The world does not need another Gibson Twist.

Oh, and Shinigami? REALLY? Goddammit, I think you just ruined Death Note for me with your weeabooness. Thanks.

Jessica Cantlope once professed to being a gay boy in a straight lady's body. A design graduate, she freelances and seeks long-term art-related work while being masochistic with drawing her two long-form webcomics.

Wow, where do I even start with that one? I suppose the beginning is just as good a place as any. The “gay boy in a straight lady’s body” thing. I don’t disapprove of creators allowing their personal tastes to influence their comics. Far from it. But what is up with anime girls letting their yaoi love drizzle all over their creepy webcomics? If I call male artists out for drawing sphere tits (Dave, Sammy, I’m looking at you!), I have no problem calling out these creepy women for centering their webcomics around their yaoi obsessions. Stop it. It’s off-putting and exploitative, and the only real readers you’ll get out of making your creepy yaoi comics are other yaoi fans. It’s okay to have a gay character and just let their relationships play out as normal or even as just a backdrop to the main story, but to show off male gonads just because it tickles your fancy is just unnerving.

That said, I think Jessica Cantlope and Jennifer Diane Reitz would get along swimmingly. If JDR still had a penis, they could get married and go shoe shopping happily ever after.

Lovefeast is Jessica Cantlope’s giant red flag to the world that she’s either bat shit crazy or really incompetent. Either way, her webcomic is off to a really hideous start, despite the fact that she has a 4-year degree in design. However, this situation is not without hope. If Cantlope can keep her creepiness away from her comic, draw anatomy better, draw some more backgrounds and fire herself as a writer, she could salvage this piece start this thing over and it would suck significantly less. However, as it stands, Lovefeast is a frightening acid trip and you should totally skip it if you value your sanity.